The 2nd Golden Melody Awards ceremony (Chinese :第二屆金曲獎) was held at the Sun Yat-sen Memorial Hall in Taipei, on 27 October 1990.

David Tao, born Tao Xuzhong, is a Taiwanese Golden Melody Award-winning singer-songwriter. He is well known for creating a crossover genre of R&B and hard rock tunes which has now become his signature style and for having popularized R&B in the Mandopop industry. 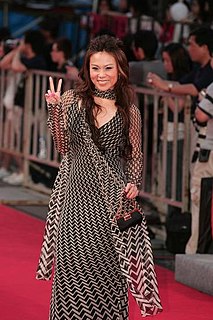 Pan Mei-chen is a Taiwanese singer-songwriter.

The Golden Melody Awards, commonly abbreviated as GMA, is an honor awarded by Taiwan's Ministry of Culture to recognize outstanding achievement in the Mandarin, Taiwanese Hokkien, Hakka, and Formosan-languages popular and traditional music industry. The GMAs are awarded on the basis of votes by members of jury, and it has constantly been recognized as the equivalent to the Grammy Awards in Chinese-speaking world. It shares recognition of the music industry as that of the other performance awards such as the Golden Bell Awards (television) and the Golden Horse Awards.

Da Mouth was a Taiwanese hip hop band made up of MC40, DJ Chung Hua, male vocalist Harry, and female vocalist Aisa. They were formed in 2007 and disbanded in 2016. They are considered the Asian The Black Eyed Peas due to the group's diversity. The band's Chinese band name directly translates into "big mouth". Their English band name is derived from the concatenation of the Chinese character for "big" 大, which when romanized using pinyin becomes "dà", and the translation of the second half of their Chinese band name. They released their self-titled debut album Da Mouth on 16 November 2007.

The 16th Golden Melody Awards were held on 28 May 2005 at the Kaohsiung Cultural Center in Kaohsiung, Taiwan. 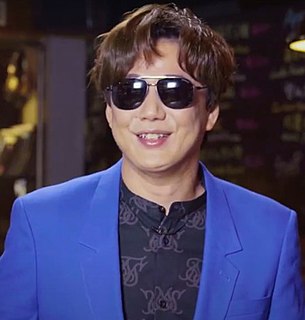 Hsiao Huang-chi is a Taiwanese singer, songwriter and former judoka. He represented Taiwan in FESPIC Games in Beijing in 1994, where he won the bronze title and placed seventh at the 1996 Atlanta Paralympics. Hsiao gained attention in the Hokkien pop scene after winning the Best Male Vocalist – Taiwanese award at the 19th Golden Melody Awards in 2008.

The Era is the tenth studio album by Taiwanese singer Jay Chou, released on 18 May 2010 by JVR Music and Sony Music Taiwan. 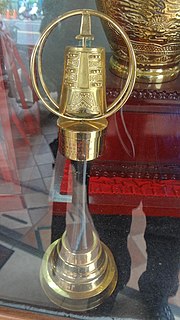 The Golden Bell Awards is an annual Taiwanese television production award presented in October or November each year by the Bureau of Audiovisual and Music Industry Development, a division of Taiwan's Ministry of Culture. It is the first television production award in Chinese circulation, founded in 1965, and Taiwan's equivalent to the Emmy Awards. It is also one of the three major annual awards presented in Taiwan, along with the Golden Melody Awards for music and the Golden Horse Film Festival and Awards for movies and films. The awards were presented by the Government Information Office until 2011.

Yisa Yu or Yu Kewei, is a Chinese singer. She started out singing in bars and participated in several singing competitions. Her career took off after she achieved fourth place nationally in the 2009 season of Hunan TV's Super Girl. Her fans are called Yu jin xiang (郁金香), which means "tulip"; personally named by Yisa.

The 22nd Golden Melody Awards were held in Taipei, Taiwan on 18 June 2011. The awards ceremony gave musical awards to musicians and songs in languages such as Mandarin, Taiwanese, and Hakka.

Li Ronghao is a Chinese singer-songwriter, actor and producer. He has released six studio albums, three EPs, and won the Golden Melody Award for Best New Singer in 2013. He has also acted in 3 movies, most notably the hit movie Duckweed. He has held 3 huge concert tours and become the first singer from the Chinese mainland to hold concerts at Hong Kong Coliseum and Taipei Arena. He was ranked 59th on the Forbes China Celebrity 100 List for 2020.

HAYA is a Chinese band. Founded in 2006, they integrate Mongolian music with modern pop music elements.