30 Coins (Spanish : 30 monedas) is a Spanish mystery horror television series created by Álex de la Iglesia for HBO Europe. [2] Directed and written by De la Iglesia and co-written by Jorge Guerricaechevarría, the series follows Father Vergara, an exorcist who is exiled by the church to Pedraza, a remote village in Spain where he hopes he is forgotten by his enemies. [3] [4]

Father Vergara is an exorcist and ex-convict residing in the small Spanish town of Pedraza, attempting to move on from a troubled past. However, paranormal phenomena start taking place in the town and he will need the help of Paco, the mayor, and Elena, the town's veterinarian, to figure out a mystery seemingly related to a coin he owns, which might be one of the thirty pieces of silver paid to Judas Iscariot for betraying Jesus and handing him over to the Romans. The three will find themselves caught in the middle of a conspiracy involving the Holy See itself and threatening the world as we know it.

The series was produced by Pokeepsie Films for HBO Europe, with the participation of HBO Latin America. [13] Álex de la Iglesia and Carolina Bang (on behalf of Pokeepsie Films) and Miguel Salvat, Steve Matthews and Antony Root (on behalf of HBO Europe) were the series' executive producers. [14] The musical score was composed by Roque Baños. [15]

Most of the production took place in Pedraza, [16] province of Segovia. Production also worked in Sepúlveda (also in the province of Segovia), and the Aldeadávila Dam (province of Salamanca). [17] [18] Other brief shooting locations include New York, Jerusalem, Paris, Geneva, Rome, Campo Real, Madrid, and Alcalá de Henares (including outdoor shots). [16] [18]

Some indoor scenes were shot in the Castle of Calatrava la Nueva in Aldea del Rey and the Palace of the Marquis of Santa Cruz in Viso del Marqués, both in the province of Ciudad Real; [19] the Castle of Guadamur (province of Toledo), the library of the Instituto del Patrimonio Cultural de España  [ es ] and the University of Salamanca's General Historical Library  [ es ]. [18]

The first episode of the eight-part first season premiered on HBO Europe on 29 November 2020. [4] The rest of the episodes was released on a weekly basis. The series aired in the United States via HBO and HBO Max in 2021, prior to its airing on HBO Latin America. [4]

The first episode was screened at the 77th Venice International Film Festival on September 11, 2020. [1]

Scout Tafoya of RogerEbert.com found the series entertaining, writing that de la Iglesia and Guerricaechevarría "peddle a Catholic version of the Cosmic Horrors of William Hope Hodgson and H.P. Lovecraft"; "their style a crispy plait of Luis Buñuel and Alex Cox". [20] Rosie Knight of IGN considers that "much of the strength of 30 Coins comes from [its] trio of leads," and that "easily the best thing about the show is that, aside from the horror, it also works as an Indiana Jones-style artifact quest," giving it 8 out of 10. [21] Marissa de la Cerda writing for The A.V. Club writes "the grotesqueries that de la Iglesia is known for are on full display in the phantasmagoric visuals and viscera". She grades it a B, concluding that it "successfully lean[s] into its drama-horror hybrid to underscore the characters’ humanity." [22]

Reviewing for Cinemanía , Miguel Ángel Romero considered De la Iglesia's creation as an immersion in the Lovecraftian universe, and also noted an implicit reference to Nyarlathotep in the season finale. [23] Romero praised Cosimo Fusco's chilling performance and the performances of Eduard Fernández and Manolo Solo in antagonist roles, [23] also welcoming the referencial nature of De la Iglesia's work (inspired by the likes of Antonio Mercero, Ridley Scott and John Carpenter). [23] Among the negative aspects to be improved Romero cited the "particularly calamitous CGI" featured in the last episodes and the disjointed plots. [23] 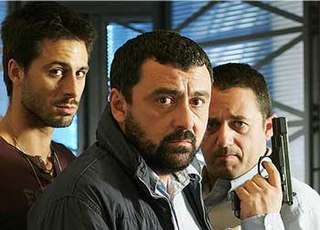 Los hombres de Paco is a Spanish television series that originally aired from 9 October 2005 to 19 May 2010 on Antena 3. Created by Daniel Écija and Álex Pina, it stars numerous actors; primarily Paco Tous and Pepón Nieto. The fiction primarily focused on a group of clumsy yet good-hearted police agents.

Veneno is a 2020 Spanish biographical television limited series, created by Javier Ambrossi and Javier Calvo that aired on Atresplayer Premium in Spain from 29 March to 25 October 2020. The series, which tells the life and death of Spanish transgender singer and television personality Cristina Ortiz Rodríguez, better known by the nickname "La Veneno", is based on the biography ¡Digo! Ni puta ni santa. Las memorias de La Veneno by Valeria Vegas. 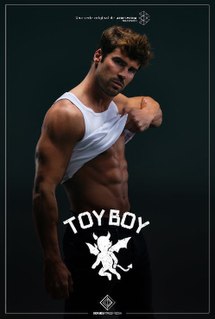 Toy Boy is a Spanish drama produced by Atresmedia and Plano a Plano. The show stars Jesús Mosquera, Cristina Castaño, and María Pedraza. It premiered first on FesTVal and Atresplayer Premium in September 2019 before its premiere on Antena 3 on 25 September 2019. 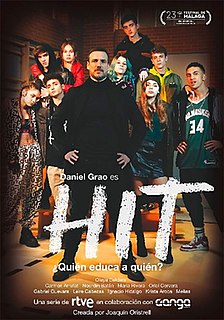 HIT is a Spanish high school-themed drama television series aired on La 1 in 2020. Created by Joaquín Oristrell, produced by RTVE in collaboration with Grupo Ganga and starring Daniel Grao as Hugo Ibarra Toledo, an unconventional educator, the series is focused on problems in high school, such as violence, harassment, and bullying.

Señoras del (h)AMPA is a Spanish dark comedy television series produced by Mediaset España and Producciones Mandarina. Created, written and directed by Carlos del Hoyo and Abril Zamora, it stars Toni Acosta, Malena Alterio, Nuria Herrero and Mamen García. The first season aired on Telecinco in 2019, yet the first part of the second season was released in exclusive by Amazon Prime Video.

14 de abril. La República is a Spanish period drama television series. Set in the Second Spanish Republic, it is a spin-off of La señora, featuring a number of characters from the latter show. Produced by RTVE in collaboration with Diagonal TV and created by Virginia Yagüe and Jordi Frades, the first season aired on La 1 in 2011. The already produced second season was put in the freeze during the seven years of rule of the People's Party, eventually airing from 2018 to 2019.

El final del camino is an adventure television series set in 11th-and 12th-century Iberia, with the construction of the Santiago de Compostela Cathedral as backdrop. It aired in 2017 on La 1 and TVG.

Caronte is a Spanish drama television series created by Verónica Fernández and produced by Mediaset España in collaboration with Big Bang Media. It made its debut in March 2020 on Amazon Prime Video before its free-to-air broadcasting.

Vis a vis: El Oasis is a Spanish television series starring Maggie Civantos and Najwa Nimri, presented both as spin-off and as 5th and final season of the television series Vis a vis. The plot focuses on the relationship between two characters of the former, Maca and Zulema, after getting out of prison. It aired in 2020 on FOX España. 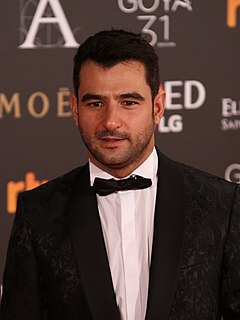 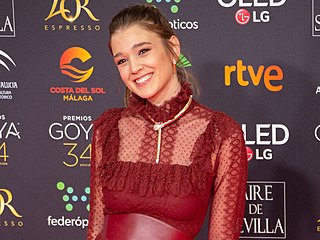 Carla Campra is a Spanish actress. She earned early public recognition for her role in 90-60-90, diario secreto de una adolescente.

Desaparecidos is a Spanish police procedural television series starring Juan Echanove, Elvira Mínguez, Maxi Iglesias and Michelle Calvó, dealing about the work of a police unit specialised on cases of missing people. Produced by Mediaset España and Plano a Plano, the first season was originally released on Amazon Prime Video on 19 June 2020. 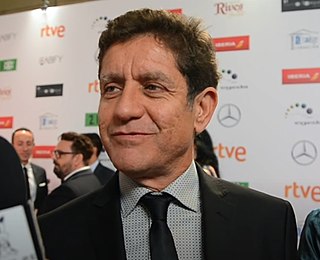 Foodie Love is a Spanish romance television series also heavily delving into gastronomy. Directed and created by Isabel Coixet, it stars Laia Costa and Guillermo Pfening. It was originally released on HBO España on 4 December 2019. 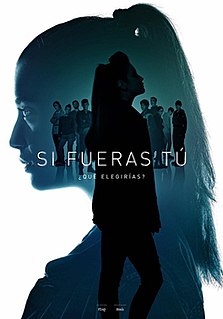 Susana Gómez Abaitua, known as Susana Abaitua, is a Spanish film, television and stage actress. She had breakthrough performances in the limited television series Patria and the film Crazy About Her.