3rd Parliament of King James I

The 3rd Parliament of King James I was summoned by King James I of England on 13 November 1620 and first assembled on 30 January 1621. The elected speaker was Sir Thomas Richardson, the Member of Parliament for St Albans. 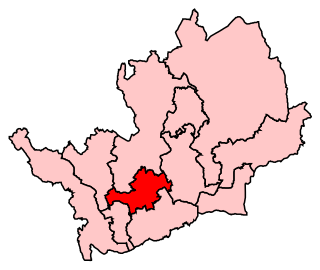 St Albans is a constituency represented in the House of Commons of the UK Parliament since 2005 by Anne Main, a Conservative.

After the disappointment of the 1614 Addled Parliament King James had attempted to rule without a Parliament, but was obliged by events in continental Europe to summon a third Parliament. His son-in-law Frederick V, Elector Palatine had accepted the throne of Bohemia and triggered an invasion by Spanish forces and James needed additional funds if he were to intervene on his son-in-law's behalf. To his relief Parliament voted him the additional subsidies and then moved on to investigate the abuse of monopolies and reform the Court of Chancery.

The Addled Parliament was the second Parliament of England of the reign of James I of England, which sat between 5 April and 7 June 1614. Its name alludes to its ineffectiveness: it lasted no more than eight weeks and failed to resolve the conflict between the King, who wished to raise money in the form of a 'Benevolence', a grant of £65,000 and the House of Commons. It was dissolved by the King, who observed grimly that he was "amazed that his ancestors should have allowed such an institution to come into existence". He probably intended to rule from then on without Parliament, and in fact did so for seven years. 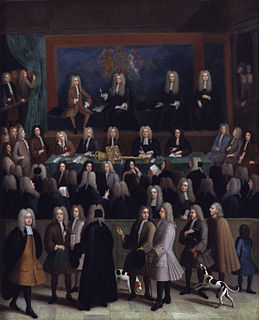 During their investigations the Commons discovered that the Lord Chancellor, Sir Francis Bacon, the Viscount St Albans, had been taking bribes, resulting in him being dismissed from his office, fined and imprisoned. Other investigations into monopoly abuse revealed that a royal favourite George Villiers, 1st Duke of Buckingham and his associates were deeply involved, including Sir Giles Mompesson, who was stripped of his parliamentary seat and knighthood, and Buckingham’s half-brother Sir Edward Villiers. King James reacted by threatening to dissolve the Parliament in June 1621 but relented and allowed it to continue after the summer recess. 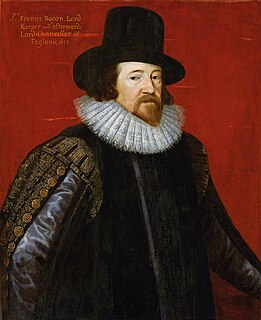 Francis Bacon, 1st Viscount St Alban, was an English philosopher and statesman who served as Attorney General and as Lord Chancellor of England. His works are credited with developing the scientific method and remained influential through the scientific revolution.

George Villiers, 1st Duke of Buckingham, KG, was an English courtier, statesman, and patron of the arts. He was a favourite and possibly also a lover of King James I of England. Despite a patchy political and military record, Buckingham remained at the height of royal favour for the first three years of the reign of King Charles I, until a disgruntled army officer assassinated him.

When Parliament reassembled James demanded further subsidies and Parliament reluctantly acceded to his demand on condition that they should be allowed to finish their other business and also suggested that his son Prince Charles should seek a Protestant wife rather than the Spanish match James had in mind. James furiously asserted that Royal marriages were nothing to do with Parliament, who in return drew up a Protestation affirming their right to free speech, as a result of which James adjourned the sitting and ordered the arrest of the Protestation's principal author Sir Edward Coke. Further arrests followed and James downgraded the Parliament to a convention (i.e. a Parliament without royal approval) and finally dissolved it by Proclamation on 6 January 1622.

Sir Edward Coke was an English barrister, judge, and politician who is considered to be the greatest jurist of the Elizabethan and Jacobean eras. 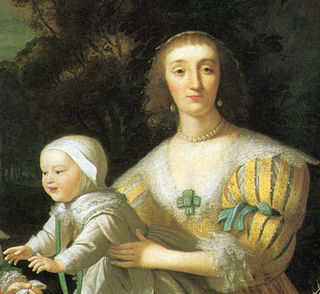 Giles Mompesson was an English office holder and courtier who sat in the House of Commons between 1614 and 1621, when he was sentenced for corruption. He was officially a "notorious criminal" whose career was based on speculation and corruption. His name came to be regarded as a synonym for official corruption, because he used nepotism to gain positions for licensing businesses by which he pocketed the fees. In the reaction against Charles I, Mompesson's name was invoked as a symbol of all that was wrong with aristocracy. Sir Giles Overreach, the anti-hero of Philip Massinger's 1625 play A New Way to Pay Old Debts, is based on Mompesson.

Francis Mitchell was the last British knight of the realm to be publicly degraded, after being found guilty of extorting money from licensees following his being granted monopoly on the licensing of inns by George Villiers, 1st Duke of Buckingham and James I.

James I, the first king to reign in both England and Scotland, faced many difficulties with the Parliament of England. Though recent studies have shown that the Parliament of Scotland may have been more of a thorn in his side than was previously believed, James developed his political philosophy of the relationship between monarch and parliament in Scotland and never reconciled himself to the independent stance of the English Parliament and its unwillingness to bow readily to his policies. 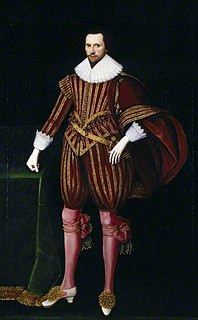 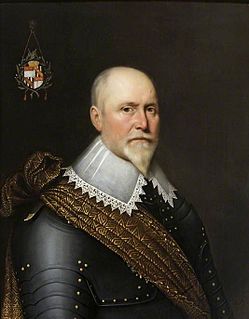 Sir Robert Howard KB was an English landowner, member of parliament, and Royalist soldier. He was involved in a scandal when his mistress Frances Coke, Viscountess Purbeck, was found guilty of adultery and was twice summoned to explain her pregnancy with his son to the Court of High Commission. During the English Civil War, Howard was in command of the defence of Bridgnorth Castle when it surrendered to the Parliamentarians in 1646. 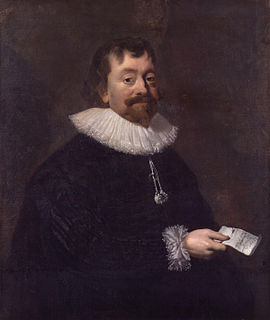 Christopher Villiers, 1st Earl of Anglesey, known at court as Kit Villiers, was an English courtier, Gentleman of the Bedchamber and later Master of the Robes to King James I. In 1623 he was ennobled as Earl of Anglesey and Baron Villiers of Daventry.

Sir Andrew Corbet (1580–1637) was an English politician of Shropshire landed gentry background who sat in the House of Commons at various times between 1624 and 1629. A Puritan sympathiser, he at first supported the government but became an increasingly vocal opponent of Charles I's policies and ministers. 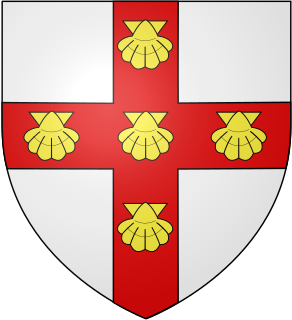 The 1st Parliament of King James I was summoned by King James I on 31 January 1604 and assembled on 19 March following. It was known as the Blessed Parliament and took place in five sessions, interrupted by Holy Days and the Gunpowder Plot. The speaker was Edward Phelips, the Member of Parliament for Somerset.