Following 2014 Crimean crisis and accompanying Russian intervention in Crimea, there was talk of suspending or expelling Russia from the G8. [6] [7] On March 24, British prime minister David Cameron announced that the meeting would not take place in Russia due to the Crimean crisis. [8] [9]

The G8 is an unofficial forum which brings together the heads of major world powers: Germany, France, the United Kingdom, Italy, Japan, the United States, and Canada (all since 1976) [10] the EU Commission (since 1981) and Russia (until March 2014). [11] When the seven founding countries decided to hold the 40th such meeting without Russia, it became the 40th G7 summit. [3]

Leaders at the summit

The attendees included the leaders of the seven G7 member states, as well as representatives of the European Union. The President of the European Commission is a permanently welcome participant in all meetings and decision-making since 1981. [11]

Traditionally, the host country of the G8 summit sets the agenda. Presidential Executive Office Chief of Staff Sergei Ivanov was the chairman of the organizational committee on preparation for Russia's G8 presidency. [10] The leaders were expected to focus on responses to new global threats during the next G8 summit. [2] The infrastructure of the 2014 Winter Olympics at Sochi was planned to be used to host the G8 summit. No additional pre-summit costs were budgeted. [2]

Following the Crimean events in March 2014, Italy, Japan, Germany, Canada, France, the United Kingdom and the United States as well as the President of the European Council and President of the European Commission held an extraordinary G7 summit in The Hague and suspended their participation in preparatory meetings for the G8. In a statement, the leaders of the G7 countries stated that Russia's occupation of the Crimea was against the principles of the G7 and contravened the United Nations Charter and its 1997 basing agreement with Ukraine. [13] 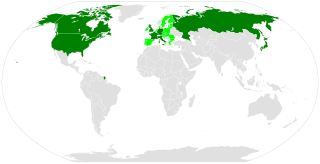 The Group of Eight (G8) was an inter-governmental political forum from 1997 until 2014. It had formed from incorporating the country of Russia into the Group of Seven, or G7, and returned to its previous name after Russia was disinvited in 2014. 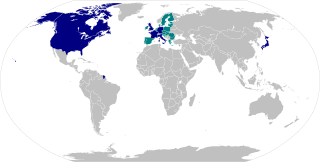 The Group of Seven (G7) is an international intergovernmental economic organization consisting of seven major developed countries: Canada, France, Germany, Italy, Japan, the United Kingdom and the United States, which are the largest IMF-advanced economies in the world.

The Group of Eight + Five (G8+5) was an international group that consisted of the leaders of the heads of government from the G8 nations, plus the heads of government of the five leading emerging economies. In March 2014, Russia was cast out of the Group of 8 due to its involvement in the 2014 Crimea crisis in Ukraine, so the G8+5 in its original form is unlikely to reconvene with Russia present.

Matteo Renzi is an Italian politician who served as the Prime Minister of Italy from February 2014 until December 2016. He has been an Italian Senator for Florence since 2018.

Sochi Olympic Park is an Olympic Park that was constructed for the 2014 Winter Olympics and 2014 Winter Paralympics. Located in the Adlersky City District of Sochi, Imeretinsky Valley, on the Black Sea, the Olympic Park houses the main Olympic Stadium used for the Games' ceremonies, and the venues that were used for indoor sports such as hockey, figure skating, curling, and speed skating. It also houses training facilities, the Olympic Village, the international broadcasting centre, and other amenities. The park was designed so that all of the venues would be accessible within walking distance of each other. The venues are situated around a water basin containing a fountain known as "The Waters of the Olympic Park"; designed by California-based WET, the fountain measures 5.3 meters in diameter with a capacity of about 700,000 gallons of water, featuring more than 250 nozzles and jet systems that can create fog and choreographed water displays set to music.

The 2014 G20 Brisbane summit was the ninth meeting of the G20 heads of government/heads of state. It was held in Brisbane, the capital city of Queensland, Australia, on 15–16 November 2014. The hosting venue was the Brisbane Convention & Exhibition Centre at South Brisbane. The event was the largest ever peacetime police operation in Australia.

The 2015 G20 Antalya summit was the tenth annual meeting of the G20 heads of government/heads of state. It was held in Belek, Antalya Province, Turkey on 15–16 November 2015. The venue for the Leaders Summit was Regnum Carya Hotel Convention Centre at the Regnum Carya Golf & Resort Spa.

The 2013 G20 Saint Petersburg summit was the eighth meeting of the G20 heads of government/heads of state. The hosting venue was the Constantine Palace in Saint Petersburg, Russia, on 5–6 September 2013. 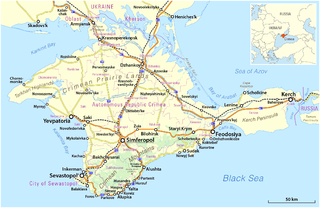 International reactions to the annexation of Crimea by the Russian Federation have almost always been condemnatory of Russia's decision to intervene, supportive of Ukraine's sovereignty and territorial integrity, while also supportive of finding a quick end to the crisis. The United States and the European Union threatened and later enacted sanctions against Russia for its role in the crisis, and urged Russia to withdraw. Russia has accused the United States and the EU of funding and directing the revolution and retaliated to the sanctions by imposing its own. 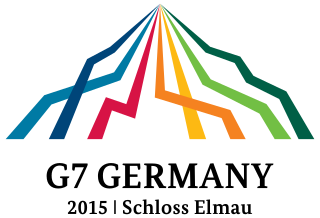 The 41st G7 summit was held in Schloss Elmau, Krün, Bavaria and Germany on June 7–8, 2015. In March 2014 the remaining members of the G8 declared that a meaningful discussion was currently not possible with Russia, and since then meetings have continued under the G7 name. 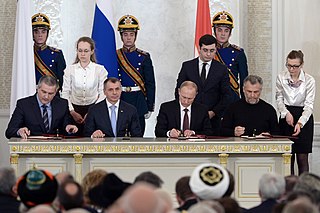 The Crimean Peninsula, north of the Black Sea in Europe, was annexed by the Russian Federation between February and March 2014 and since then has been administered as two Russian federal subjects—the Republic of Crimea and the federal city of Sevastopol. The annexation from Ukraine followed a Russian military intervention in Crimea that took place in the aftermath of the 2014 Ukrainian revolution and was part of wider unrest across southern and eastern Ukraine.

The following lists events that happened in 2014 in Russia.

The political status of Crimea is disputed between Ukraine and Russia. The dispute is known as the Crimean Problem or the Crimean Question. Russian forces seized Crimea by force in 2014. Russia then annexed Crimea in 2014 following a referendum, and administers it as two federal subjects of Russia, and claimed it to be 'fully integrated' in July 2015. Ukraine and the majority of international governments continue to regard Crimea as an integral part of Ukraine. 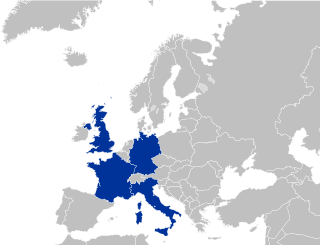 The Big Four, also known as G4, refers to France, Germany, Italy and the United Kingdom. These countries are considered major European powers and they are the Western European countries individually represented as full members of the G7, the G8, the G10 and the G20. France, Germany, Italy and the United Kingdom have been referred to as the "Big Four of Europe" since the interwar period. The term G4 was used for the first time when French President Nicolas Sarkozy called for a meeting in Paris with Italian Prime Minister Silvio Berlusconi, Prime Minister of the United Kingdom Gordon Brown and Chancellor of Germany Angela Merkel to consider the response to the financial crisis during the Great Recession. The Organisation for Economic Co-operation and Development describes them as the "Four Big European Countries". 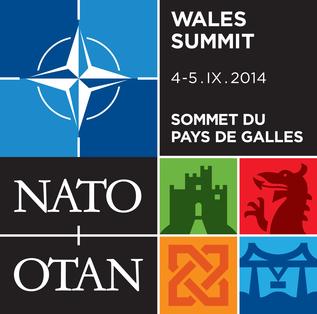 The 2014 Wales Summit of the North Atlantic Treaty Organization (NATO) was a meeting of the heads of state and heads of government of the North Atlantic Treaty Organization, held in Newport, Wales on 4 and 5 September 2014. Such summits are sporadically held, and allow leaders and officials from NATO Allies to discuss current issues of mutual concern and to plan strategic activities. The 2014 summit has been described by US Navy Admiral James Stavridis as the most important since the fall of the Berlin Wall.

The 42nd G7 summit was held on May 26–27, 2016 at the Shima Kanko Hotel in Kashiko Island, Shima, Mie Prefecture, Japan. In March 2014, the G7 declared that a meaningful discussion was currently not possible with Russia in the context of the G8. Since then, meetings have continued within the G7 process.

The 43rd G7 summit was held on 26–27 May 2017 in Taormina (ME), Sicily, Italy. In March 2014, the G7 declared that a meaningful discussion was currently not possible with Russia in the context of the G8. Since then, meetings have continued within the G7 process.

The 46th G7 summit of the leaders of the Group of Seven was originally scheduled to be held on June 10 through June 12, 2020, at Camp David, United States. However, U.S. President Donald Trump postponed the summit until at least September 2020.