For the second time the 4th Ukrainian Front was created on 4. August 1944, by separating the left wing of the 1st Ukrainian Front. The front took part in the Carpathian Offensive simultaneously with the Battle of the Dukla Pass and after that the front was involved in the battles in East-, North- and Central Slovakia, as well as in the Moravian-Ostrava Offensive Operation on the Polish-Moravian borders and finally in the Prague Offensive which was the final battle of World War II in Europe. [1]

The 4th Ukrainian Front actions were important for the liberation of the Czechoslovakia. The 1st Czechoslovak Army Corps also served within the front since November 1944 until May 1945. [1]

On 25 August 1945, the front was disbanded and its elements incorporated into the Carpathian Military District.

Commanders of the Front

The 8th Guards Order of Lenin Combined Arms Army is an army of the Russian Ground Forces, headquartered in Novocherkassk, Rostov Oblast, within Russia′s Southern Military District, that was reinstated in 2017 as a successor to the 8th Guards Army of the Soviet Union's Red Army, which was formed during World War II and was disbanded in 1998 after being downsized into a corps. 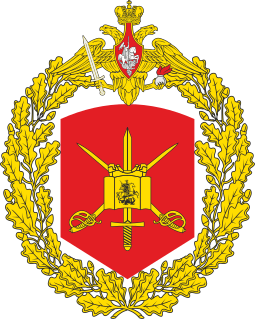 The 1st Guards Tank Army is a tank army of the Russian Ground Forces.

The 2nd Tatsinskaya Guards Tank Corps was a Red Army tank corps that saw service during World War II on the Eastern Front. After the war it continued to serve with Soviet occupation forces in Central Europe. It was originally the 24th Tank Corps. The unit had approximately the same size and combat power as a Wehrmacht Panzer Division, and less than a British Armoured Division had during World War II.

The 3rd Shock Army was a field army of the Red Army formed during the Second World War. The "Shock" armies were created with the specific structure to engage and destroy significant enemy forces, and were reinforced with more armoured and artillery assets than other combined arms armies. Where necessary the Shock armies were reinforced with mechanised, tank, and cavalry units. During the Second World War, some Shock armies included armoured trains and air–sled equipped units.

This is the order of battle for German Wehrmacht and the Soviet Red Army engaged in the battle in Berlin. The investment of Berlin began about 21 April 1945, it was followed by the assault and the capture of the city by the Soviets on 2 May 1945.

The North Western Operational Command (SZOK) is a command of the Belarus Ground Forces. It is headquartered at Borisov and is commanded by Major General Alexander Volfovich. The command includes a mechanized brigade and a mixed artillery brigade. It was formed in 2001 from the 65th Army Corps.

The 161st Stanislawska Red Banner Order of Bogdan Khmelnitsky Mechanised Brigade was a brigade of the Ukrainian Ground Forces, which traced its history to the creation of the 161st Rifle Division of the Red Army in 1940.

The 11th Guards Mechanized Brigade is a unit of the Armed Forces of Belarus based in Slonim. The 11th Guards Brigade traces its history back to the 1942 formation of the 6th Tank Corps of the Soviet Army during World War II.

The 31st Army was a field army of the Red Army during the Second World War.

The 32nd Army was a formation of the Soviet Army during World War II. The army was formed twice during the war, disbanded as part of the post-war demobilization and then reformed in 1969 to protect the Soviet-Chinese border.

The 1st Tank Division was a Division sized unit of the Red Army that existed from 1940–42. It was later reformed, from a separate formation, with a different lineage. Within the Soviet Ground Forces it existed as a second line ready division from 1945–2008, at Kaliningrad in the Baltic Military District.