81 KRH 71 Y (81 mm kranaatinheitin malli 1971 ympäriampuva, '81 mm mortar model 1971, 360-degree traverse') is a light mortar manufactured by Tampella for use by the Finnish Army. [1] :192–193 It is usually used to support the infantry by indirect fire, but it can also be used for direct fire. Each Finnish infantry company has a platoon of 81 mm mortars. The mortar platoon consists of three seven-man mortar squads, each squad manning a single 81 mm mortar. Jaeger Company M2005 has a fire support squad, which consists of two five-man mortar teams, both equipped with an 81 mm mortar. It can fire HE-fragmentation, smoke, illumination and practice rounds.

A company is a military unit, typically consisting of 80–150 soldiers and usually commanded by a major or a captain. Most companies are formed of three to six platoons, although the exact number may vary by country, unit type, and structure.

A platoon is a military unit typically composed of two or more squads/sections/patrols. Platoon organization varies depending on the country and the branch, but are generally around 50 strong, although specific platoons may range from 9 to 100 men.

The United States chemical mortar battalions were army units attached to U.S. infantry divisions during World War II. They were armed with 4.2 in chemical mortars. For this reason they were also called the "Four-deucers".

The M224 60 mm Lightweight Mortar is a smooth bore, muzzle-loading, high-angle-of-fire weapon used for close-in support of ground troops. It was deployed extensively in the War in Afghanistan by the United States. 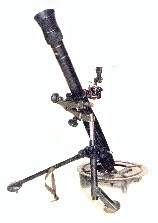 The M252 81 mm medium weight mortar is a British designed smooth bore, muzzle-loading, high-angle-of-fire weapon used for long-range indirect fire support to light infantry, air assault, and airborne units across the entire front of a battalion zone of influence. In the U.S. Army and U.S. Marine Corps, it is normally deployed in the mortar platoon of an infantry battalion.

A section is a military sub-subunit. It usually consists of between six and 20 personnel and is usually an alternative name for, and equivalent to, a squad. As such two or more sections usually make up an army platoon or an air force flight. 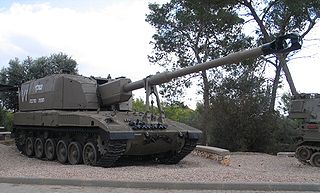 A weapons company, sometimes called a manoeuvre support company, is a company-sized military unit attached to an infantry battalion to support the rifle companies of the battalion. It usually possesses some combination of machine-guns, mortars, anti-tank missiles, anti-aircraft missiles, reconnaissance vehicles and, sometimes, assault pioneers.

The ordnance SBML two-inch mortar, or more commonly, the "two-inch mortar", was a British mortar issued to the British Army and the Commonwealth armies, that saw use during the Second World War and later.

An 81 mm mortar is a medium-weight mortar. It is a smooth-bore, muzzle-loading, high-angle-of-fire weapon used for long-range indirect fire support to light infantry, air assault, and airborne units across the entire front of a battalion zone of influence.

This is an (incomplete) list of former equipment used by the Finnish Army: 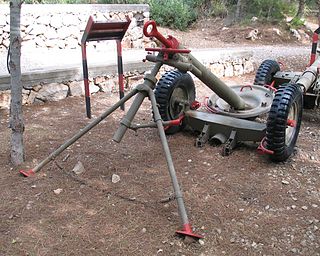 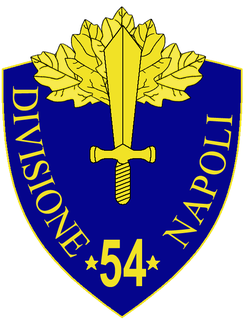 The 54th Infantry Division Napoli was a regular infantry division of the Italian Army during World War II. It was created 15 April 1939 in Caltanissetta and was dissolved 14 August 1943 in Melia southeast of Scilla, Calabria after being nearly wiped out in the Allied invasion of Sicily. The division drafted men in southern Sicily. The members of the division hailed from Caltanissetta, Agrigento, Syracuse and surrounding territories. 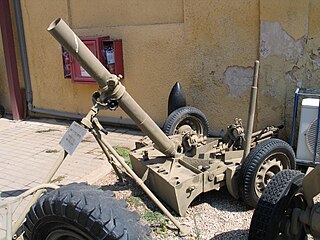 The Ordnance ML 4.2-inch mortar was a British heavy mortar used by the during and after World War II.

A mortar carrier, or self-propelled mortar, is a self-propelled artillery piece in which a mortar is the primary weapon. Simpler vehicles carry a standard infantry mortar while in more complex vehicles the mortar is fully integrated into the vehicle and cannot be dismounted from the vehicle. Mortar carriers cannot be fired while on the move and some must be dismounted to fire.

Mortaio da 81/14 Modello 35 was an Italian World War II infantry mortar. It was the standard weapon of the Italian Army during the war, of typical Brandt-system construction, but relatively lightweight, with good range and considered very successful. 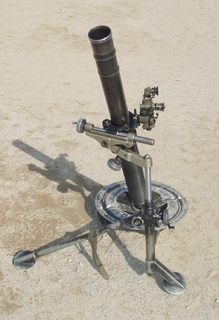 The United Kingdom's L16 81mm mortar is the standard mortar used by the British armed forces. It originated as a joint design by the UK and Canada. The version produced and used by Australia is named the F2 81mm Mortar, whilst the version used by the U.S. armed forces is known as the M252.