8K display resolution is the successor to 4K resolution. TV manufacturers pushed to make 4K a new standard by 2017. At CES 2019, the first 8K TVs were unveiled. [2] The feasibility of a fast transition to this new standard is questionable in view of the absence of broadcasting resources. [3] It is predicted (2018 forecast by Strategy Analytics) that 8K-ready devices will still only account for 3% of UHD TVs by 2023 with global sales of 11 million units a year. [4] However, TV manufacturers remain optimistic as the 4K market grew much faster than expected, with actual sales exceeding projections nearly six-fold in 2016. [5]

In 2013, a transmission network's capability to carry HDTV resolution was limited by internet speeds and relied on satellite broadcast to transmit the high data rates. The demand is expected to drive the adoption of video compression standards and to place significant pressure on physical communication networks in the near future. [6]

As of 2018 [update] , few cameras had the capability to shoot video in 8K, NHK being one of the only companies to have created a small broadcasting camera with an 8K image sensor. [7] By 2018, Red Digital Cinema camera company had delivered three 8K cameras in both a Full Frame sensor and Super 35 sensor. [8] Until major content sources are available, 8K is speculated to become a mainstream consumer display resolution around 2023 as mentioned in UHD forum Phase-B recommendations.[ citation needed ] Despite this, filmmakers are pushing demand for 8K cameras due to their ability to capture better 4K footage.

The term "8K" is generic and refers to any resolution with a horizontal pixel count of approximately 8,000. Several different 8K resolutions have been standardized by various organizations.

Japan's public broadcaster NHK was the first to start research and development of 4320p resolution in 1995. The format was standardized by SMPTE in October 2007, Interface standardized by SMPTE in August 2010 and recommended as the international standard for television by lTU-R in 2012. Followed by public displays at electronics shows and screenings of 2014 Winter Olympics in Sochi and public viewings in February 2014 and the FIFA World Cup in Brazil in June 2014 using HEVC with partners AstroDesign and Ikegami Electronics. [9] [10] [11]

In early February 2020, Samsung Electronics, announced during their Unpacked event that their Samsung Galaxy S20 can video record in 8K, which uses 600 MB of storage per minute. [18]

On April 6, 2013, Astrodesign Inc. announced the AH-4800, capable of recording 8K resolution. In April 2015 it was announced by Red that their newly unveiled Red Weapon VV is also capable of recording 8K footage. In October 2016 they announced two additional 8K cameras, Red Weapon 8K S35 and Red Epic-W 8K S35. [19] The Red Weapon Dragon VV has been discontinued as of October 7,2017 [update] , when Red unveiled the Red Weapon Monstro VV, their fourth camera capable of shooting 8K, with additional improvements in dynamic range and noise reduction, among other features.

In 2007, the original 65 mm negative of the 1992 film Baraka was re-scanned at 8K with a film scanner built specifically for the job at FotoKem Laboratories, and used to remaster the 2008 Blu-ray release. Chicago Sun-Times critic Roger Ebert described the Blu-ray release as "the finest video disc I have ever viewed or ever imagined." [20] A similar 8K scan/4K intermediate digital restoration of Lawrence of Arabia was made for Blu-ray and theatrical re-release during 2012 by Sony Pictures to celebrate the film's 50th anniversary. [21] [22] According to Grover Crisp, executive VP of restoration at Sony Pictures, the new 8K scan has such high resolution that when examined, showed a series of fine concentric lines in a pattern "reminiscent of a fingerprint" near the top of the frame. This was caused by the film emulsion melting and cracking in the desert heat during production. Sony had to hire a third party to minimize or eliminate the rippling artifacts in the new restored version. [21]

In November 2013, NHK screened the experimental-drama short film "The Chorus" at Tokyo Film Festival which was filmed in 8K and 22.2 sound format. [24]

On May 1, 2015, an 8K abstract computer animation was screened at the Filmatic Festival at the University of California, San Diego. The work was created as an assignment in the VIS 40/ICAM 40 Introduction to Computing in the Arts class taught at UCSD by Associate Teaching Professor Brett Stalbaum during the winter quarter of 2015, with each student producing three hundred 8192 × 4800 pixel frames. The work's music soundtrack was composed by Mark Matamoros. [25] [26]

Japanese public broadcaster NHK began research and development on 8K in 1995, having spent over $1 billion on R&D since then. [28] Codenamed Super Hi-Vision (named after its old Hi-Vision analog HDTV system), NHK also was simultaneously working on the development of 22.2 channel surround sound audio. The world's first 8K television was unveiled by Sharp at the Consumer Electronics Show (CES) in 2012. [29] Experimental transmissions of the resolution were tested with the 2012 Summer Olympics, and at the Cannes Film Festival showcasing Beauties À La Carte, a 27-minute short showcased publicly on a 220" screen, with a three-year roadmap that entails the launch of 8K test broadcasting in 2016, with plans to roll out full 8K services by 2018, and in time for the 2020 Summer Olympics, [30] which were delayed to 2021 due to the COVID-19 pandemic. On December 1, 2018, NHK launched BS8K, a broadcast channel transmitting at 8K resolution. [31] [32] [33]

Panavision has been a manufacturer of cameras for the motion picture industry since the 1950s, beginning with anamorphic widescreen lenses. The lightweight Panaflex is credited with revolutionizing filmmaking. Other influential cameras include the Millennium XL and the digital video Genesis.

Mobile High-Definition Link (MHL) is an industry standard for a mobile audio/video interface that allows the connection of smartphones, tablets, and other portable consumer electronics devices to high-definition televisions (HDTVs), audio receivers, and projectors. The standard was designed to share existing mobile device connectors, such as Micro-USB, and avoid the need to add additional video connectors on devices with limited space for them. 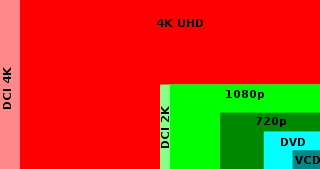 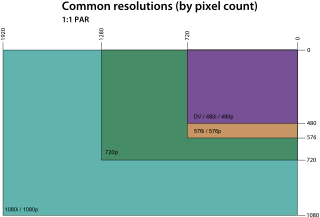 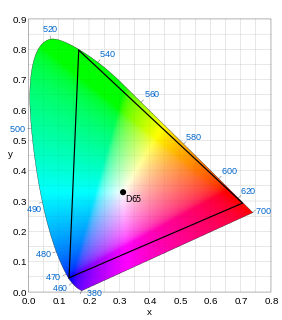 ITU-R Recommendation BT.2020, more commonly known by the abbreviations Rec. 2020 or BT.2020, defines various aspects of ultra-high-definition television (UHDTV) with standard dynamic range (SDR) and wide color gamut (WCG), including picture resolutions, frame rates with progressive scan, bit depths, color primaries, RGB and luma-chroma color representations, chroma subsamplings, and an opto-electronic transfer function. The first version of Rec. 2020 was posted on the International Telecommunication Union (ITU) website on August 23, 2012, and two further editions have been published since then. It is expanded in several ways by Rec. 2100.

The Samsung Galaxy S series is a line of high-end Android mobile devices produced by Samsung Electronics. Together with the Samsung Galaxy Note, the lineup serves as Samsung's flagship smartphone model. 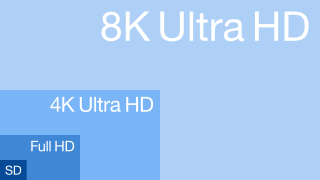 5K resolution refers to display formats with a horizontal resolution of around 5,000 pixels. The most common 5K resolution is 5120 × 2880, which has an aspect ratio of 16∶9 with around 14.7 million pixels, with four times the linear resolution of 720p. This resolution is typically used in computer monitors to achieve a higher pixel density, and is not a standard format in digital television and digital cinematography, which feature 4K resolutions and 8K resolutions.

Samsung's Galaxy A5 (2016) is a mid-range Android smartphone developed by Samsung Electronics as a part of Samsung Galaxy A series. The phone is powered by Exynos 7580 SoC with a 1.6 GHz processor. It has 2GB RAM and 16GB internal storage that is expandable up to 128 GB. It has accelerometer, geomagnetic sensor, hall sensor, proximity sensor and RGB light sensor. Notable features include Samsung Pay (MST) and S-Voice. It measures 144.8 x 71.0 x 7.3 mm and weighs 155g.

The Samsung Galaxy S20 is a series of Android-based smartphones designed, developed, marketed, and manufactured by Samsung Electronics as part of its Galaxy S series. They collectively serve as the successor to the Galaxy S10 and were unveiled at Samsung's Galaxy Unpacked event on 11 February 2020.

Samsung Galaxy A71 is an Android smartphone designed, developed, marketed, and manufactured by Samsung Electronics as part of its Galaxy A series. 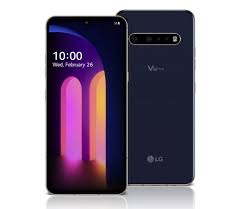 The LG V60 ThinQ 5G, commonly referred to as the LG V60, is an Android phablet manufactured by LG Electronics as part of the LG V series. It was announced in February 2020 and is the successor to the LG V50 ThinQ. On April 5, 2021 LG announced it will be shutting down its mobile phone division and ceasing production of all remaining devices. LG noted the phone will be available until existing inventory runs out.

The Sony α7S III is a 12.2-megapixel full-frame mirrorless interchangeable-lens camera made by Sony. It was publicly announced on July 28, 2020 online with a suggested retail price of US$3,495 at the time.

The Samsung Galaxy S20 Fan Edition is an Android-based phablet designed, developed, marketed and manufactured by Samsung Electronics as part of its Galaxy S series. It was announced at Samsung's Unpacked Event on 23 September 2020 as a less expensive variant of the main S20 series. 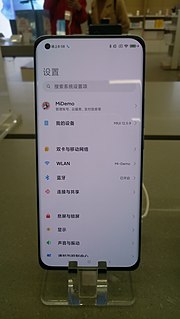 The Xiaomi Mi 11 is an Android-based high-end smartphone designed, developed, produced and marketed by Xiaomi Inc. for their Xiaomi Mi Series, succeeding by their Xiaomi Mi 10 series. The phone was launched globally on 8 February 2021.