System A-235 PL-19 Nudol (Russian:Система А-235 / ПЛ-19-181М / Нудоль) is a Russian anti-ballistic missile and anti-satellite weapon [1] [2] system in development. [3] [4] It is designed to deflect a nuclear attack on Moscow and important industrial regions. The main developer of the system is JSC Concern VKO Almaz-Antey. The new system should replace the current one — A-135. The two main differences will be that the A-235 will use conventional warheads and it will be mobile. [5]

The A-235 system will use Don-2N radar as well as Don 2NP / 5N20P as range radar, with updated software and hardware; the guidance system of the A-235 complex will be similar to the existing system A-135. The A-235, when deployed, could be equipped with a nuclear warhead which would greatly increase its ability to destroy incoming warheads. The yield on which it would be deployed is not yet known. [6] According to reports in early 2018, the system will not be equipped with nuclear warheads. [7] According to Russian sources, the system will be deployed at points surrounding Moscow by the end of 2018. [8]

The long-range missiles will most likely be equipped with nuclear warheads, while the others will have kinetic energy warheads. Testing of new missiles for the A-235 Samolyot-M system began in August 2014. [5]

Initially, the A-235 missile defense system was planned to have three-echelons: long-range echelon with the A-925 missile, the middle echelon was the 58R6 firing complex, and the short-range flight was the PRS-1M missiles (the result of the upgrade of the PRS-1 missiles). [5] In the modified A-235 anti-missile and anti-space defense system, it is planned to use two-stage anti-missiles with high-explosive and nuclear warheads, providing it with the ability to shoot down hypersonic attack weapons, hypersonic orbital platforms, ballistic missiles, and their combat units, as well as satellites in near space. [11]

On 4 June 2019, the Russian Ministry of Defense posted a video showing the successful interception of the test target which was a test of a new anti-ballistic missile system in the form of a long-range surface to air missile. Though the nature of the air defense system which was being tested was not mentioned it has been widely speculated to have been a test of the S-500 Prometheus long-range surface to air missile system which entered early production earlier in the year. However, it also could have been the test of the A-235 anti-ballistic missile system which tests have been conducted on since 2014. [12]

The anti-ballistic missile system was tested at Plesetsk Cosmodrome, on 15 April 2020, at the ex-launch site of the Tsyklon-2 rocket. [13]

On 15 November 2021, the missile successfully destroyed the Kosmos 1408 satellite. The breakdown of the satellite caused space debris to form, which forced the crew of ISS to shelter. The debris passed every 93 minutes. [14]

A cruise missile is a guided missile used against terrestrial targets, that remains in the atmosphere and flies the major portion of its flight path at approximately constant speed. Cruise missiles are designed to deliver a large warhead over long distances with high precision. Modern cruise missiles are capable of travelling at high subsonic, supersonic, or hypersonic speeds, are self-navigating, and are able to fly on a non-ballistic, extremely low-altitude trajectory.

An intercontinental ballistic missile (ICBM) is a missile with a minimum range of 5,500 kilometres (3,400 mi) primarily designed for nuclear weapons delivery. Similarly, conventional, chemical, and biological weapons can also be delivered with varying effectiveness, but have never been deployed on ICBMs. Most modern designs support multiple independently targetable reentry vehicles (MIRVs), allowing a single missile to carry several warheads, each of which can strike a different target. Russia, the United States, China, France, India, the United Kingdom, and North Korea are the only countries that have operational ICBMs. 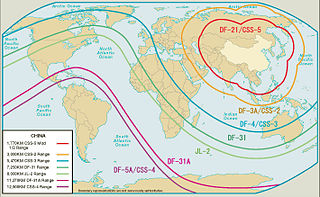 Anti-satellite weapons (ASAT) are space weapons designed to incapacitate or destroy satellites for strategic or tactical purposes. Several nations possess operational ASAT systems. Although no ASAT system has yet been utilised in warfare, a few countries have successfully shot down their own satellites to demonstrate their ASAT capabilities in a show of force. ASATs have also been used to remove decommissioned satellites. 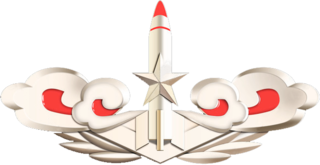 The People's Liberation Army Rocket Force, formerly the Second Artillery Corps, is the strategic and tactical missile force of the People's Republic of China. The PLARF is the 4th branch of the People's Liberation Army (PLA) and controls China's arsenal of land-based ballistic missiles—both nuclear and conventional. The armed service branch was established on 1 July 1966 and made its first public appearance on 1 October 1984. The headquarters for operations is located at Qinghe, Beijing. The PLARF is under the direct command of the Chinese Communist Party's Central Military Commission (CMC).

The S-500 Prometey, also known as 55R6M "Triumfator-M", is a Russian surface-to-air missile/anti-ballistic missile system intended to replace the A-135 missile system currently in use, and supplement the S-400. The S-500 was developed by the Almaz-Antey Air Defence Concern. Initially planned to be in production by 2014, finally first delivered in 2021. According to Pravda Report, the S-500 will be integrated into a single network of aerospace defense assets.

An air-launched ballistic missile or ALBM is a ballistic missile launched from an aircraft. An ALBM allows the launch aircraft to stand off at long distances from its target, keeping it well outside the range of defensive weapons like anti-aircraft missiles and interceptor aircraft. Once launched, the missile is essentially immune to interception. This combination of features allowed a strategic bomber to present a credible deterrent second-strike option in an era when improving anti-aircraft defences appeared to be rendering conventional bombers obsolete. 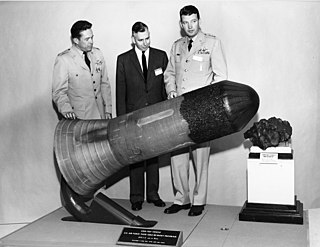 Hypersonic flight is flight through the atmosphere below altitudes of about 90 km at speeds greater than Mach 5, a speed where dissociation of air begins to become significant and high heat loads exist. Speeds of Mach 25+ have been achieved below the thermosphere as of 2020.

The Dongfeng-41 is a fourth-generation Chinese solid-fuelled road-mobile intercontinental ballistic missile operated by the People's Liberation Army Rocket Force. DF-41 is the fourth and the latest generation of the Dongfeng series strategic missiles developed by China. The missile was officially unveiled at the China National Day military parade on 1 October 2019.

China's anti-satellite (ASAT) program has been under development since 1964. The ASAT program has since been moved from Program 640 to Program 863, the General Armaments Department and the State Administration for Science, Technology and Industry for National Defense. Since its inception, the ASAT program has made progress on the development of three ASAT capable Systems: direct fire, directed-energy weapon, and microsatellites. Tests of these systems have either been directly acknowledged by the PRC, or reported on as ASAT capable. China is pursuing a broad and robust array of counterspace capabilities, which includes direct-ascent antisatellite missiles, co-orbital antisatellite systems, computer network operations, groundbased satellite jammers, and directed energy weapons. 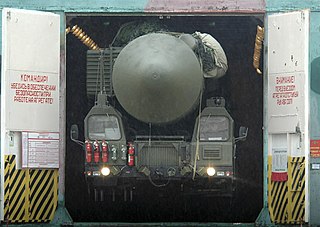