A-type asteroids are relatively uncommon inner-belt asteroids that have a strong, broad 1 μm olivine feature and a very reddish spectrum shortwards of 0.7 μm. They are thought to come from the completely differentiated mantle of an asteroid, and appear to have a high density. One survey found that 7 similar A-, V- and X-type asteroids had an average density of 3.6 g/cm3. [1]

C-type (carbonaceous) asteroids are the most common variety, forming around 75% of known asteroids. They are volatile-rich and distinguished by a very low albedo because their composition includes a large amount of carbon, in addition to rocks and minerals. Their density averages at about 1.7 g/cm3. They occur most frequently at the outer edge of the asteroid belt, 3.5 astronomical units (AU) from the Sun, where 80% of the asteroids are of this type, whereas only 40% of asteroids at 2 AU from the Sun are C-type. The proportion of C-types may actually be greater than this, because C-types are much darker than most other asteroid types except for D-types and others that are mostly at the extreme outer edge of the asteroid belt.

M-type asteroids are a spectral class of asteroids which appear to contain higher concentrations of metal phases than other asteroid classes, and are widely thought to be the source of iron meteorites.

R-type asteroids are moderately bright, relatively uncommon inner-belt asteroids that are spectrally intermediate between the V and A-type asteroids. The spectrum shows distinct olivine and pyroxene features at 1 and 2 micrometres, with a possibility of plagioclase. Shortwards of 0.7 μm the spectrum is very reddish.

Q-type asteroids are relatively uncommon inner-belt asteroids with a strong, broad 1 micrometre olivine and pyroxene feature, and a spectral slope that indicates the presence of metal. There are absorption features shortwards and longwards of 0.7 μm, and the spectrum is generally intermediate between the V and S-type.

D-type asteroids have a very low albedo and a featureless reddish spectrum. It has been suggested that they have a composition of organic-rich silicates, carbon and anhydrous silicates, possibly with water ice in their interiors. D-type asteroids are found in the outer asteroid belt and beyond; examples are 152 Atala, and 944 Hidalgo as well as the majority of Jupiter trojans. It has been suggested that the Tagish Lake meteorite was a fragment from a D-type asteroid, and that the Martian moon Phobos is closely related. 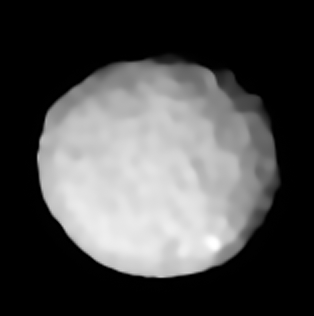 B-type asteroids are a relatively uncommon type of carbonaceous asteroid, falling into the wider C-group; the 'B' indicates these objects are spectrally blue. In the asteroid population, B-class objects can be found in the outer asteroid belt, and also dominate the high-inclination Pallas family which includes the third-largest asteroid 2 Pallas. They are thought to be primitive, volatile-rich remnants from the early Solar System. There are 65 known B-type asteroids in the SMASS classification, and 9 in the Tholen classification as of March 2015. 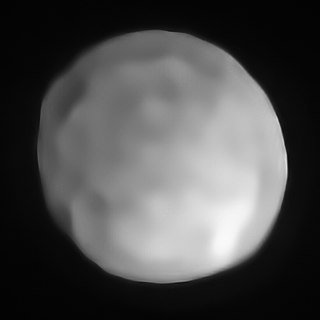 Hygiea is a major asteroid and possible dwarf planet located in the main asteroid belt. With a diameter of 434 kilometres (270 mi) and a mass estimated to be 3% of the total mass of the belt, it is the fourth-largest asteroid in the Solar System by both volume and mass. In some spectral classifications it is the largest of the dark C-type asteroids with a carbonaceous surface, whereas in others it is second after 1 Ceres. 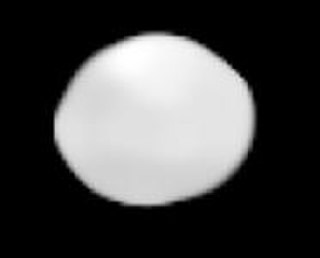 Euphrosyne is a very young asteroid. It is the one of the largest asteroids. It was discovered by James Ferguson on September 1, 1854, the first asteroid found from North America. It is named after Euphrosyne, one of the Charites in Greek mythology. In 2019 a small companion was discovered. It is the third-roundest known asteroid ; this is thought to be due to having re-accreted after being disrupted by a collision, and it is not close to hydrostatic equilibrium.

Frigga is a large, M-type, possibly metallic main-belt asteroid. It was discovered by the German-American astronomer C. H. F. Peters on November 12, 1862. The object is named after Frigg, the Norse goddess. The asteroid is orbiting the Sun with a period of 4.36 years and completes a rotation on its axis every nine hours.

Hertha is an asteroid from the inner region of the asteroid belt, approximately 77 kilometers in diameter. Discovered on 18 February 1874 by German–American astronomer Christian Peters at the Litchfield Observatory near Clinton, New York, it was named after the Teutonic and Scandinavian goddess of fertility, Hertha, also known as Nerthus. It orbits among the Nysa asteroid family, but its classification as an metallic M-type asteroid does not match the more common F-type asteroid for this family, suggesting that it may be an interloper. Spectroscopic analysis indicates the possible presence of hydrated silicates indicating that Hertha should possibly be reclassified from its present M-type to the proposed W-type.

An asteroid spectral type is assigned to asteroids based on their emission spectrum, color, and sometimes albedo. These types are thought to correspond to an asteroid's surface composition. For small bodies that are not internally differentiated, the surface and internal compositions are presumably similar, while large bodies such as Ceres and Vesta are known to have internal structure. Over the years, there has been a number of surveys that resulted in a set of different taxonomic systems such as the Tholen, SMASS and Bus–DeMeo classifications.

773 Irmintraud, provisional designation 1913 TV, is a dark and reddish, rare-type asteroid from the outer region of the asteroid belt, about 92 kilometers in diameter. It was discovered on 22 December 1913, by German astronomer Franz Kaiser at Heidelberg Observatory in southern Germany.

9951 Tyrannosaurus, provisional designation 1990 VK5, is a stony Vestian asteroid from the inner regions of the asteroid belt, approximately 17 kilometers in diameter. It was discovered on 15 November 1990, by Belgian astronomer Eric Elst at ESO's La Silla Observatory in northern Chile. It was named after Tyrannosaurus, a genus of dinosaurs.