A. K. M. Miraj Uddin (born 11 March 1948 – disappeared 8 December 1971) was a Bangladeshi athlete, politician and a freedom fighter. As an athlete, he achieved success in hurdling, pole vault and long jump in primary and secondary school. He also competed in Pakistani national sporting events from 1963 to 1970, setting multiple records. He is considered one of the best athletes of Bangladesh's pre-independence era. [1] He fought in various battlefields of Manikganj as an active freedom fighter in Bangladesh Liberation War. He was captured by the Pakistani army during the war and later went missing. The Shaheed Miraj–Tapan Stadium in Manikganj was named in honour of him and another martyred freedom fighter Tapan Chowdhury.

Miraj Uddin was born on 11 March 1948 in the village of Vatikanda in the Ramkrishnapur Union of Harirampur Upazila in East Pakistan. He is the eldest son of Sharif Uddin Ahmed and Mosammat Hajera Khatun. He completed his formal education from primary to eighth class in Harirampur. He passed primary from Leshraganj Primary School in Harirampur and eighth grade from Patgram Onathbandhu School. He completed his secondary at Nabakumar Institute in Dhaka and his higher secondary at Jagannath College. At the undergraduate level, he was a student of social sciences at Dhaka University. [1] [2]

If this boy gets a fiber pole, he will be able to break the record of the Asian Games.

—Hoffmann, Pakistan national athletics coach, commented after seeing Miraj setting a record with a bamboo pole at the Polevolt event in 1966 [1] [3]

Miraj Uddin's athletics career started in 1963. That year, he won national-level pole vault, hurdles and long jump events at the inter-school sports competition. He achieved this feat in the 1964 Pakistan Provincial Sports Competition in Lahore, where he also won the individual title. In 1965, he set a new national record for 110 m hurdles, pole vault and long jump on behalf of Jagannath College in the intercollegiate sports competition. [2] He set a Pakistan national record by crossing a height of 12 feet 2 inches with a bamboo pole, instead of  fiberglass or carbon fiber pole in a pole vault event at the 10th Pakistan Games (known as the 'Pakistan Olympic') in Lahore in 1966. In that competition, he was the only gold medalist among the Bengali players of East Pakistan at that time. [1] His successes continued into university life in the areas of pole vault, hurdles and long jump events. He was the first to win a personal title in the inter-university sports competition in 1970. In the same year, he led a parade bearing the flag of the East Pakistan Sports Team at the 12th Pakistan National Games at the Karachi Hockey Club Ground. [3] Due to his success in athletics, he was selected as a member of the Pakistan team for the 1972 Munich Olympics. [1] [2]

Miraj Uddin was stared studying social sciences at Dhaka University from 1969; he was the second year in 1970. At that time he was elected Sports Secretary of Haji Muhammad Muhsin Hall student council on behalf of Bangladesh Chhatra League. [4] [5]

Participation in the War of Liberation (1971)

Miraj Uddin returned to his village Vatikanda, after Operation Searchlight took place in Dhaka. In the first week of April 1971, along with his younger brother AKM Siraj Uddin, the freedom fighter organizer of Manikganj, led by former Captain Abdul Halim Chowdhury, joined the war of liberation and took part in the front line as a guerrilla. [2] [4] One of the battles he took part in was the Golaidanga battle in Singair upazila. [6] He fought in the battle of Golaidanga on 26 October under the leadership of Tabarak Hossain Ludu. 81 Pakistani soldiers were killed in this battle. [1] [7] On 2 November, he was caught by the Pakistan army while planting dynamite on the Baniajuri bridge on the Dhaka-Aricha highway. [4]

The Pakistani army did not leave him in the Manikganj prison camp but sent him to Dhaka Cantonment. He was later sent to Dhaka Central Jail. [4]

On the morning of 6 December 1971, Major Mostaq, the director of Al-Badr forces, released Miraj from Dhaka Central Jail and took him in a jeep. He has been missing since then. [1] [2]

After Bangladesh gained independence, the Manikganj District Stadium was named the Shaheed Miraj–Tapan Stadium after him and another martyred freedom fighter Tapan Chowdhury. [2] [8] [9] 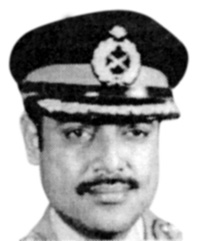 Khaled Mosharraf, Bir Uttom was a Bangladeshi military officer known for his role in the Bangladesh Liberation War. Khaled was the Sector Commander of Bangladesh Forces Sector 2, leader of the Crack Platoon and K Force (Bangladesh) Brigade Commander during the Bangladesh War of Independence. He fought heroically for Bangladesh's independence and was wounded in front line combat against the Pakistan Army. Under his command K-Force played a crucial role in the unconditional surrender of the Pakistani Army on 16 December 1971. On 23 October, while commanding an operation of the K-Force, Khaled Mosharraf was gravely wounded by enemy fire and required a long period of recovery. Although he suffered a bullet injury, he recovered and remained in command of Bangladesh Forces Sector 2. He is best known as an exceptional combatant who had planned and carried out guerrilla warfare from deep within the jungles of Melaghar. More than thirty five thousand guerilla fighters fought under Khaled's command in sector 2. 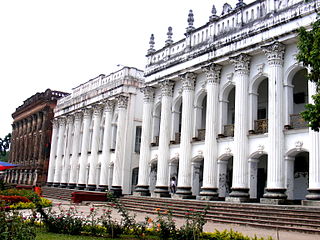 Manikganj is a district in central Bangladesh. It is a part of the Tangail Sub Division. 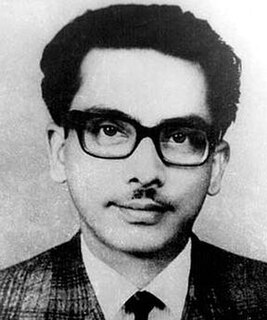 Shahidullah Kaiser was a Bangladeshi novelist and writer. He was awarded Bangla Academy Literary Award in 1969, Ekushey Padak in 1983 and Independence Day Award in 1998.

Shafaat Jamil, Bir Bikrom was a Bangladesh Army colonel. He was the commanding officer of the 3rd East Bengal Regiment of Z Force Brigade in Sector 11 of Bangladesh Forces during the War of Bangladesh Independence in 1971. He was among the first Bengali officers who rebelled against the Pakistani Army in the 1971 Liberation War of Bangladesh and later fought in 11 sector and in Sylhet sector.

Jagannath University (JnU) is a state-funded public university at 9–10, Chittaranjan Avenue in Sadarghat, Dhaka, the capital of Bangladesh. Even though it is one of the most famous and academically one of the best universities in Bangladesh, JnU is the only non-residential University in this country Jagannath University is in the southern part of Dhaka city near the River Buriganga and a new super modern campus of approximately 200 acres is being built at Keraniganj. Total campus area is more than 210 acres with three campus and a girls residence hall.

Nawabganj is an upazila of Dhaka District in the Division of Dhaka, Bangladesh.

Ghior is an upazila (sub-district) of Manikganj District of central Bangladesh, located in the Dhaka Division. It is located at 23.8875°N 89.8375°E and is named after the town of Ghior. It is home to the Tarra Bridge, an overpass above the Dhaleshwari River, which is one of the major bridges of the country. The 53 km R506 road is one of the main roads of Ghior connecting the upazila to Dhaka and Tangail. Md. Nazmul Islam, Upazila Nirbahi Officer is the present Executive Head of the Upazila.

Sujanagar is an upazila of the Pabna District of northern Bangladesh's Rajshahi Division. It is the home of agriculture across the district, and the Onion Capital of the country.

Tanore is an Upazila of Rajshahi District in the Division of Rajshahi, Bangladesh. Tanore police station was established in February 1869 and it was declared sub-district or upazila in 1983. 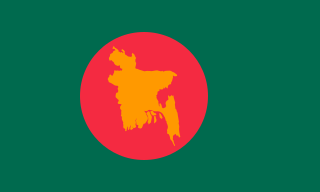 The Independence Day of Bangladesh, which takes place on 26 March, is a Bangladeshi national holiday. It commemorates the country's declaration of independence from Pakistan in the early hours of 26 March 1971.

Shaheed Miraj–Tapan Stadium, also known as Manikganj Stadium, is a football ground in Manikganj, Bangladesh. From 2019–20 season of Bangladesh Premier League football club Rahmatganj MFS have played their home matches at this ground.

ANM Faizul Mahi, born in the district of Feni, was a Bengali educationist.

Colonel Malek Medical College, Manikganj is a government medical school in Bangladesh, established in 2014. It is located in Manikganj. The college is affiliated with the University of Dhaka under the faculty of Medicine. Academic activities began on 26 January 2015 with 51 students. The commencement of the academic activities started at the Manikganj Nursing College temporarily. The permanent campus is being built in Joyra, Manikganj.

Manikganj-2 is a constituency represented in the Jatiya Sangsad of Bangladesh since 2014 by Momtaz Begum of the Awami League. Nasir Uddin Chowdhury is a politician in Sunamganj District of Sylhet Division of Bangladesh. He was elected Member of Parliament from the Sunamganj-2 (Derai-Shala) seat for the Jatiya Party in the June 1996 7th parliamentary elections.

Ayez Uddin Ahmed was a Bangladeshi freedom fighter. He was awarded Bir Protik for his contribution to the Liberation War of Bangladesh.

Aftab Uddin Chowdhury, also known as Chan Miah, is a Bangladesh Muslim League politician, diplomat and the former Member of Parliament for the Mymensingh-10 constituency.

AKM Samsul Haque Khan was Bengali-Pakistani civil servant who was killed in the Bangladesh Liberation war and is considered a martyr in Bangladesh. He was awarded the Independence Day Award, the highest civilian award in Bangladesh, in 2010.