Albert Venn Dicey, KC , FBA (4 February 1835 – 7 April 1922), usually cited as A. V. Dicey, was a British Whig jurist and constitutional theorist. [1] He is most widely known as the author of Introduction to the Study of the Law of the Constitution (1885). [2] The principles it expounds are considered part of the uncodified British constitution. [3] He became Vinerian Professor of English Law at Oxford, one of the first Professors of Law at the London School of Economics, and a leading constitutional scholar of his day. Dicey popularised the phrase "rule of law", [4] although its use goes back to the 17th century.

Dicey was born on 4 February 1835. His father was Thomas Edward Dicey, senior wrangler in 1811 and proprietor of the Northampton Mercury and Chairman of the Midland Railway. His elder brother was Edward James Stephen Dicey. [5] He was also a cousin of Leslie Stephen and Sir James Fitzjames Stephen.

Dicey was educated at King's College School in London and Balliol College, Oxford, graduating with Firsts in classical moderations in 1856 and in literae humaniores in 1858. In 1860 he won a fellowship at Trinity College, Oxford, which he forfeited upon his marriage in 1872.

He was called to the bar by the Inner Temple in 1863, subscribed to the Jamaica Committee around 1865, and was appointed to the Vinerian Chair of English Law at Oxford in 1882, a post he held until 1909. [3] In his first major work, the seminal Introduction to the Study of the Law of the Constitution, he outlined the principles of parliamentary sovereignty for which he is most known. He argued that the British Parliament was "an absolutely sovereign legislature" with the "right to make or unmake any law". In the book, he defined the term constitutional law as including "all rules which directly or indirectly affect the distribution or the exercise of the sovereign power in the state". [6] He understood that the freedom British subjects enjoyed was dependent on the sovereignty of Parliament, the impartiality of the courts free from governmental interference and the supremacy of the common law. In 1890, he was appointed Queen's Counsel. [7]

He later left Oxford and went on to become one of the first Professors of Law at the then-new London School of Economics. There he published in 1896 his Conflict of Laws. [8] Upon his death on 7 April 1922, Harold Laski memorialised him as "the most considerable figure in English jurisprudence since Maitland." [9]

Dicey was receptive to Jeremy Bentham's brand of individualist liberalism and welcomed the extension of the franchise in 1867. [10] [11] He was affiliated with the group known as the "University Liberals," who composed the Essays on Reform and was not ashamed to be labeled a Radical. [12] Dicey held that "personal liberty is the basis of national welfare." He treated Parliamentary sovereignty as the central premise of the British constitution. [13]

Dicey became a Liberal Unionist and a vigorous opponent of Home Rule for Ireland and published and spoke against it extensively from 1886 until shortly before his death, advocating that no concessions be made to Irish nationalism in relation to the government of any part of Ireland as an integral part of the United Kingdom. [14] He was thus bitterly disillusioned by the Anglo-Irish Treaty agreement in 1921 that Southern Ireland should become a self-governing dominion (the Irish Free State), separate from the United Kingdom.

Dicey was also vehemently opposed to women's suffrage, proportional representation (while acknowledging that the existing first-past-the-post system wasn't perfect), and to the notion that citizens have the right to ignore unjust laws. Dicey viewed the necessity of establishing a stable legal system as more important than the potential injustice that would occur from following unjust laws. In spite of this, he did concede that there were circumstances in which it would be appropriate to resort to an armed rebellion but stated that such occasions are extremely rare. [15] 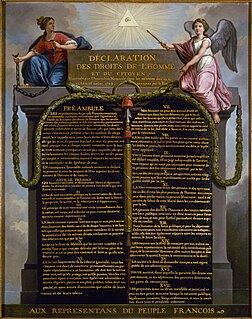 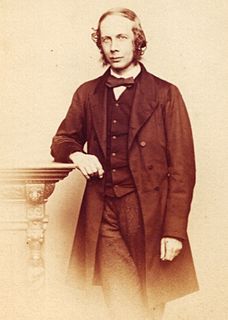 Sir Paul Gavrilovitch Vinogradoff was a Russian and British historian and medievalist.

Sir Frederick Pollock, 3rd Baronet PC, FBA was an English jurist best known for his History of English Law before the Time of Edward I, written with F.W. Maitland, and his lifelong correspondence with US Supreme Court Justice Oliver Wendell Holmes. He was a Cambridge Apostle.

Sir Geoffrey Rudolph Elton was a German-born British political and constitutional historian, specialising in the Tudor period. He taught at Clare College, Cambridge, and was the Regius Professor of Modern History there from 1983 to 1988. 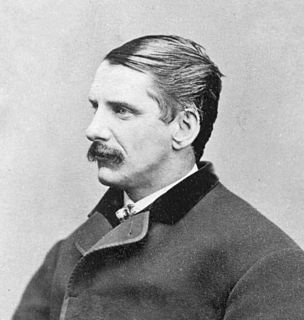 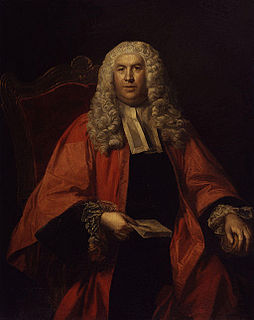 The British Constitution Association, founded in 1905 as the British Constitutional Association, was a pressure group designed to oppose increasing state regulation, whether from the Liberal Party's New Liberalism or Joseph Chamberlain's proposals for Tariff Reform. It has been described as "a curious mixture of unionist free traders, orthodox poor law administrators, and followers of Herbert Spencer". 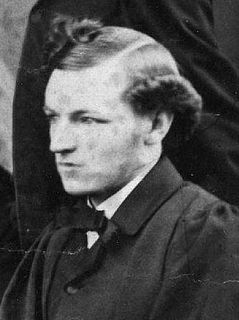 The rule according to a higher law is a statement which expresses that no law may be enforced by the government unless it conforms with certain universal principles of fairness, morality, and justice. Thus, the rule according to a higher law may serve as a practical legal criterion to qualify the instances of political or economical decision-making, when a government, even though acting in conformity with clearly defined and properly enacted legal rules, still produces results which many observers find unfair or unjust.

The rule of law is one of the longest established common law fundamental principles of the governance of the United Kingdom, dating to Magna Carta of 1215, particularly jurisprudence following its late 13th century re-drafting. It as a minimum subjects an otherwise absolute monarch (executive) and all free people within its jurisdictions, primarily those of England and Wales, Scotland and Northern Ireland to legal doctrines known as the general principles of law. It has evolved to work only alongside equal application of the law to all free people 'equality before the law' and within the framework of the constitutional monarchy supports the legal doctrine of parliamentary sovereignty. Exactly what it entails beyond this and the way that different aspects of the rule of law principle are applied, depends on the specific situation and era. 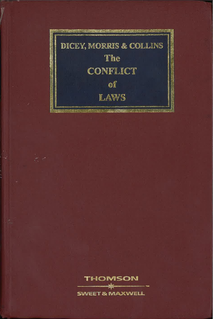 Dicey, Morris & Collins on the Conflict of Laws is the leading English law textbook on the conflict of laws (ISBN 978-0-414-02453-3). It has been described as the "gold standard" in terms of academic writing on the subject, and the "foremost authority on private international law".

John Humphrey Carlile Morris was a British legal scholar, best known for his contributions to the conflict of laws.

Emlyn Capel Stewart Wade was a British constitutional law scholar. He was Downing Professor of the Laws of England at the University of Cambridge from 1945 to 1962.

Introduction to the Study of the Law of the Constitution is a book by A. V. Dicey about the constitution of the United Kingdom. It was first published in 1885.