The first AFF–EAFF Champions Trophy match, to be played on a single-match format, was initially scheduled to be held on 26 March 2019 [1] at the Mỹ Đình National Stadium in Hanoi, Vietnam between the national football teams of Vietnam and South Korea. [3] [4] However, on 19 February 2019, it was announced that the inaugural AFF–EAFF Champions Trophy match would be postponed until an unclear date in 2020 after both contesting teams failed to settle on a date for the match within the 2019 calendar. [5] [6]

The trophy will be contested biennially, with AFF and EAFF rotating the host venue duties and the former staging the first-ever Champions Trophy. [1] Vietnam automatically won hosting right to the inaugural Champions Trophy match on 15 December 2018 after beating Malaysia 3–2 on aggregate score in the 2018 AFF Championship Final. [7] A memorandum of understanding (MoU) for the organisation of the AFF–EAFF Champions Trophy was signed in Hanoi, Vietnam on 15 December 2018 by AFF Deputy President, Maj General Khiev Sameth, and EAFF President, Chung Mong-gyu. [1] [2]

The AFF Championship is a biennial international association football competition, contested by the men's national teams of the member of ASEAN Football Federation (AFF), determining the sub-continental champion of Southeast Asia.

The ASEAN Football Federation (AFF) is a smaller organisation within the greater Asian Football Confederation, and centres on Southeast Asia, founded in 1984 by the nations of Brunei, Indonesia, Malaysia, Philippines, Singapore and Thailand. ASEAN stands for Association of South East Asian Nations, although the AFF also includes East Timor and Australia, which are not members of ASEAN.

The 2008 AFF Championship is the seventh edition of the tournament. It is primarily sponsored by Suzuki and therefore officially known as the 2008 AFF Suzuki Cup. was the 8th edition of the AFF Championship, The group stage was held in Indonesia and Thailand from 5 to 10 December 2008. Two-legged home-and-away semi-finals and finals were held between 16 and 28 December 2008.

The Vietnam national under-23 football team represents Vietnam in international football tournaments at the under-23 age level.

The Vietnam women's national football team is a female football team representing Vietnam and controlled by Vietnam Football Federation (VFF). The team is currently ranked 34th in the world, 6th in Asia and 2nd in Southeast Asia below Australia by FIFA.

The AFF Women's Championship is the competition in women's football organised by the ASEAN Football Federation, contested by the national teams of nations in Southeast Asia. The official tournament started in 2004, hosted by Vietnam and won by Myanmar. 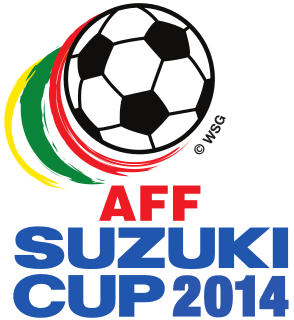 The 2021 Southeast Asian Games, commonly known as the 31st SEA Games, is scheduled to take place in Hanoi, Vietnam from 21 November to 2 December 2021 and will feature some 36 to 40 sports, mainly those played at the Olympic Games. This is the second time which Vietnam held the SEA Games since 2003.

Nguyễn Quang Hải is a Vietnamese professional footballer who plays as an attacking midfielder for Hà Nội F.C and Vietnam national football team. In 2018, he was voted by a panel of sports journalists and football experts as among the top 15 of Best Footballer in Asia.

The 2019 AFF U-15 Championship is the fourteenth edition of the AFF U-16 Championship, the annual international youth association football championship organised by the ASEAN Football Federation for men's under-15 national teams of Southeast Asia.