A Fal (Hungarian for The Wall) is a game show broadcast on Hungarian television station RTL Klub. It is affiliated with the U.S. game show The Wall .

The eponymous wall is a five-story-tall pegboard, similar to a pachinko game or bean machine; it also is similar to the Plinko board used for that pricing game of the same name on The Price Is Right . The bottom of the board is divided into 15 slots marked with various Hungarian forint amounts, some of which increase as the game progresses. Seven numbered "drop zones" are centered at the top of the board (above the center seven slots), from which balls can be dropped into play.

R*: The first and second broadcast recorded in Milan.

The Price Is Right is an American television game show created by Bob Stewart, Mark Goodson and Bill Todman. The show revolves around contestants competing by identifying accurate pricing of merchandise to win cash and prizes. Contestants are selected from the studio audience when the announcer states the show's famous catchphrase, "Come on down!"

Match Game is an American television panel game show that premiered on NBC in 1962 and has been revived several times over the course of the next six decades. The game features contestants trying to match answers given by celebrity panelists to fill-in-the-blank questions. Beginning with the CBS run of the 1970s, the questions are often formed as humorous double entendres. 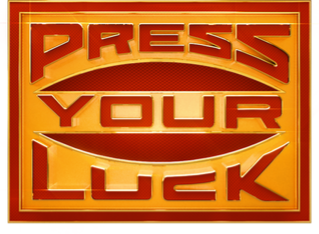 Press Your Luck is an American television game show created by Bill Carruthers and Jan McCormack. It premiered on CBS daytime on September 19, 1983, and ended on September 26, 1986. The format is a retooling of an earlier Carruthers production, Second Chance, hosted by Jim Peck and which aired on ABC in 1977.

Pyramid is the collective name of a series of American television game shows that has aired several versions domestically and internationally. The original series, The $10,000 Pyramid, debuted on March 26, 1973, and spawned seven subsequent Pyramid series. Most later series featured a full title format matching the original series, with the title reflecting an increasing top prize. The game features two contestants, each paired with a celebrity. Contestants attempt to guess a series of words or phrases based on descriptions given to them by their teammates. The title refers to the show's pyramid-shaped gameboard, featuring six categories arranged in a triangular fashion. The various Pyramid series have won a total of nine Daytime Emmys for Outstanding Game Show, second only to Jeopardy!, which has won 13.

Deal or No Deal is the name of several closely related television game shows, the first of which was the Dutch Miljoenenjacht produced by French content production company Banijay. The centerpiece of this format is the final round which is played with up to 26 cases, each containing randomly assigned sums of money. After the player for the case game is determined, this contender claims one case or a box at the start of the game, without its contents being revealed. The contestant then chooses the other cases or boxes, one at a time, to be immediately opened and removed from play. Throughout the game, the player is offered an amount of money or prizes to quit, being asked the titular question, "Deal or no deal?" If the contestant rejects every deal and eliminates all the other cases or boxes, the player keeps the money that was in the original case or box. Thus, the contestant "wins" depending on whether the player should have taken one of the deals or should have held onto the original case or box until the very end.

Flamingo Fortune is an American game show for the Florida Lottery that aired from 1995–1999. It was originally produced by Mark Goodson Productions, at the time also producing game shows for state lotteries alongside his regular game shows. After the first five shows, production was transferred to Jonathan Goodson Productions, after All American Television spun out their lottery game shows to Mark Goodson's son, Jonathan Goodson. Production would later transfer to Columbia TriStar Television and Game Show Network from 1997 to 1999. The program was taped at Universal Studios Florida near Orlando, Florida.

Deal or No Deal was an Australian game show that aired on the Seven Network from 13 July 2003 to 4 October 2013 and aired at 5:30 pm. It was the first international version of the game show, after the original Dutch version. It was the first of the versions to use the Deal or No Deal name. The show was recorded at the studio facilities of Global Television located in the Melbourne suburb of Southbank. The top prize of $200,000 was won by four contestants.

Illinois Instant Riches is a lottery game show airing in the state of Illinois, as well as nationally on Chicago-based Superstation WGN-TV. The show was hosted by Mark Goodman, with Linda Kollmeyer as his co-host and Bill Barber as announcer.

Deal or No Deal is the American version of the international game show of Dutch origin of the same name. The show is hosted by actor-comedian Howie Mandel, and premiered on December 19, 2005, on NBC. The hour-long show typically aired at least twice a week during its run, and included special extended or theme episodes. The show started its fourth season on August 25, 2008, a day after NBC's coverage of the 2008 Beijing Olympics ended. A daily syndicated half-hour version of the show debuted on September 8, 2008, and continued for two seasons. 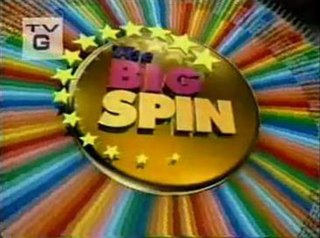 Tokyo Friend Park 2 is a Japanese game show that premiered in April 1994 on the Tokyo Broadcasting Station (TBS). TFP2 airs on Monday nights roughly from 6:55 - 7:54 JST in Japan. 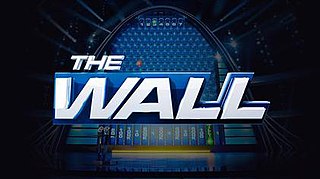 The Wall is an American television game show aired on NBC, which premiered on December 19, 2016. The show is hosted by Chris Hardwick, who also serves as executive producer on the show along with LeBron James, Maverick Carter, and Andrew Glassman.

The Wall is an Australian television game show based on the American version which began broadcast on Seven Network from 30 October 2017. The show is hosted by Axle Whitehead. The program ran for one season.

The Challenge: Vendettas is the thirty-first season of MTV reality competition series, The Challenge. The official trailer was shown during the special mini-series Champs vs. Stars. For the first time, this season featured alumni from the US version of Big Brother, and the UK TV shows Ex on the Beach and Geordie Shore, competing with alumni from the regular shows of The Real World, Road Rules, The Challenge, and Are You the One? For the first time ever, there was only one winner. 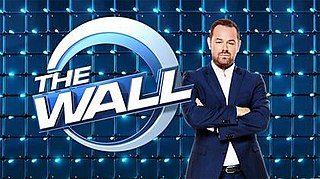 The Wall is a British television series hosted by Danny Dyer, broadcast on Saturday evenings on BBC One. It is based on the American version of the same name. The first series of the show was filmed on the set of the Polish version, at Transcolor Studio in Szeligi near Warsaw between 1 and 6 July 2019, and the second was filmed at Wembley Arena due to travel restrictions as a result of the COVID-19 pandemic. The questions are voiced by Angela Rippon. The show was developed into a board game in December 2020 by Ideal Games. In March 2021 a fourth series, for broadcast in late 2021, was announced.

Face au Mur is a Canadian game show which premiered on January 18, 2018 on TVA. The show, an adaptation of the American game show The Wall and a Tagline in France. is hosted by Québécois host Maripier Morin. The show was ran for one season and the main sponsors are Vidéotron and Nissan.

The Wall Philippines is a Philippine game show based on the original American format of The Wall. The main goal of the game is to bank as much money as possible by correctly answering 11 multiple choice questions and landing the balls on high-value bins. If an incorrect answer is given, the amount landed on is deducted from the total. The players take home whatever is left on the bank. However, the players may opt to take the guaranteed amount based on the first round and the number of correct answers in the succeeding rounds.