A Royal Affair (Danish : En kongelig affære) is a 2012 drama film [1] directed by Nikolaj Arcel, starring Mads Mikkelsen, Alicia Vikander and Mikkel Følsgaard. The story is set in the 18th century, at the court of the mentally ill King Christian VII of Denmark, and focuses on the romance between his wife, Caroline Matilda of Great Britain, and the royal physician Johann Friedrich Struensee.

Princess Caroline Matilda of Great Britain is shown writing a letter to her children in which she professes to tell them the truth. In flashback, Caroline talks of England, as she was about to leave to marry Christian VII of Denmark. She is passionate about the arts and education, but when she arrives in Denmark she is told that many of her books are banned by the state. Christian is mentally ill and Caroline is unhappy in the marriage. She is soon pregnant with a son (Frederick VI of Denmark), but the couple grow far apart and the king stops visiting her bedroom.

The German doctor Johann Friedrich Struensee is recruited to work as the king's personal physician. Struensee is a man of the Enlightenment, greatly influenced by the writings of Jean-Jacques Rousseau. He keeps this secret from the state, who welcome him because his father is a well-known priest. King Christian takes a strong liking to Struensee and he becomes a close friend and confidant. When Struensee manages to inoculate Prince Frederick against a smallpox epidemic, he becomes greatly respected in the court. Christian has very little influence in the Privy Council, and the laws of the country are mostly decided by statesmen, but Struensee tells the king that he can have more power by "acting". The doctor begins writing speeches for the king which advocate his own progressive views, and several reforms are passed in Denmark.

Caroline and Struensee learn of their mutual interests and liberal views. They fall in love and begin an affair. When Caroline becomes pregnant, they protect themselves by convincing Christian to resume sleeping with her. As a result, Princess Louise Auguste is believed to be the king's daughter. Meanwhile, Struensee is appointed a Royal Adviser and eventually persuades Christian to assign him the right to pass any law, making him Denmark's de facto leader. His reforms include the abolition of censorship, the abolition of torture, and reducing the power of the aristocracy. The queen dowager, Juliana Maria of Brunswick-Wolfenbüttel, notices the romance between Caroline and Struensee and their affair is revealed. Christian is initially angry, but he forgives his friend and states that they must carry on as if nothing had changed.

The film returns to Caroline writing the letter, where she reveals that she is dying of an illness. Ten years later, Prince Frederick and Princess Louise Auguste read the letter. On-screen text reveals that Frederick soon became king via a coup d'état and returned to the reforming ways of Struensee.

Nikolaj Arcel and Rasmus Heisterberg started the writing process by reading the 1999 novel The Visit of the Royal Physician by Per Olov Enquist, which is based on the events surrounding Johann Friedrich Struensee's time at the Danish court. The exclusive film rights for the novel were already sold to a company which had been struggling for over a decade to make a large-scale adaptation in English, and did not want to sell the rights to Zentropa. Research continued and the film was eventually credited as based on Bodil Steensen-Leth's erotic novel Prinsesse af blodet , which tells the story from the perspective of the queen, Caroline Mathilde. The film's perspective and characterisation did still remain highly influenced by Enquist's version, in particular in the portrayal of Struensee as an idealistic promoter of freedom of speech, the romantic view of the royal court as an ironical charade and the role of the queen as a revolutionary partner-in-crime to Struensee. To avoid conflicts about rights, Enquist was contacted to clarify some instances of what he had made up and what was based on documented events, and a person was employed specifically to compare the screenplay and the novel to guarantee that they were dissimilar enough. [5]

The film was produced by Zentropa and is a co-production among Denmark, Sweden and the Czech Republic. [6] It had a budget of 47.7 million Danish kroner. [7] (approximately US$7.8 million in 2022) [8] Before settling on the final title, the film had the production titles Dronningen og livlægen ("The queen and the royal physician"), based in part on the title of Enquist's book, and Caroline Mathildes år ("Caroline Mathilde's years"). [9]

Review aggregation website Rotten Tomatoes gives the film a score of 90% based on 112 reviews and an average rating of 7.25/10. The critical consensus reads: "A Royal Affair is a lavish and sumptuous costume drama with a juicy story to back it up." [11] Metacritic gives a weighted average rating of 73 based on reviews from 27 critics, indicating "generally favorable reviews." [12]

British Film Critic Mark Kermode tied the film as the Best Film of 2012 along with Berberian Sound Studio .

Historian Alfred Brown notes that the film depicts Struensee as speaking fluent Danish, when in fact he did not speak it and persistently used German, which helped alienate him from Danish society. Brown also notes that "The exiled Queen's letter to her children makes a good frame story to the film, however had she in reality written such a letter – frankly admitting Princess Louise Auguste's true parentage – it might have easily fallen into the wrong hands and caused the young princess to be declared a bastard". [13]

At the Berlin Film Festival, Mikkel Følsgaard won the Silver Bear for Best Actor and Nikolaj Arcel and Rasmus Heisterberg won the award for Best Script. [14]

Lensgreve Johann Friedrich Struensee was a German physician, philosopher and statesman. He became royal physician to the mentally ill King Christian VII of Denmark and a minister in the Danish government. He rose in power to a position of "de facto" regent of the country, where he tried to carry out widespread reforms. His affair with Queen Caroline Matilda caused a scandal, especially after the birth of a daughter, Princess Louise Augusta, and was the catalyst for the intrigues and power play that caused his downfall and dramatic death. 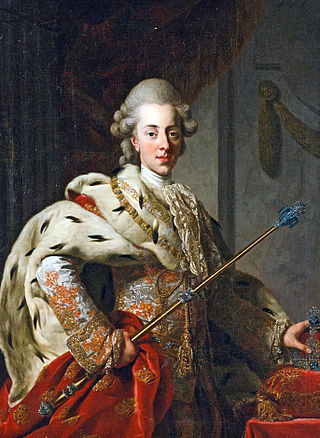 Christian VII was a monarch of the House of Oldenburg who was King of Denmark–Norway and Duke of Schleswig and Holstein from 1766 until his death in 1808. For his motto he chose: "Gloria ex amore patriae". 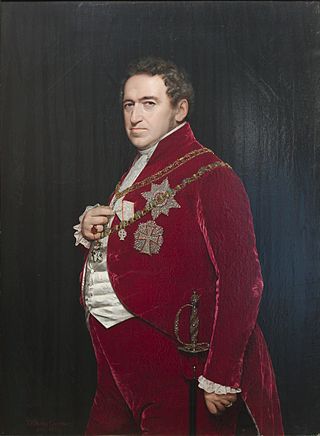 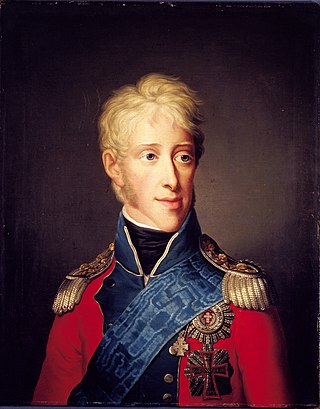 Frederick VI was King of Denmark from 13 March 1808 to 3 December 1839 and King of Norway from 13 March 1808 to 7 February 1814, making him the last king of Denmark–Norway. From 1784 until his accession, he served as regent during his father's mental illness and was referred to as the "Crown Prince Regent". For his motto he chose God and the just cause and since the time of his reign, succeeding Danish monarchs have also chosen mottos in the Danish language rather than the formerly customary Latin. As Frederick VI had no surviving sons to succeed him, he was succeeded on the throne of Denmark by his half-first cousin Christian, who was his father's half-brother's son. 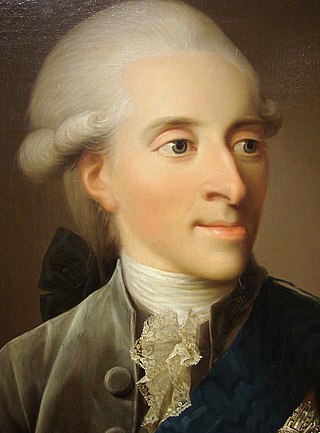 Frederick, Hereditary Prince of Denmark was heir presumptive to the thrones of Denmark and Norway. He was the only surviving son of King Frederick V by his second wife, Juliana Maria of Braunschweig-Wolfenbüttel.

Caroline Matilda of Great Britain was Queen of Denmark and Norway from 1766 to 1772 by marriage to King Christian VII.

Hirschholm Palace, also known as Hørsholm Palace, was a royal palace located in present-day Hørsholm municipality just north of Copenhagen, Denmark. It was rebuilt in the Baroque style in the 1740s and, one of the finest buildings of its time, it became known as the "Versailles of the North".

Ove Høegh-Guldberg was a Danish statesman, historian, and de facto prime minister of Denmark during the reign of the mentally unstable King Christian VII. 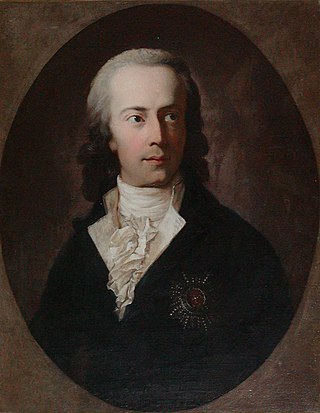 Frederick Christian II, Duke of Schleswig-Holstein-Sonderburg-Augustenburg was a Danish prince and feudal magnate. He held the island of Als and some other castles in Schleswig. 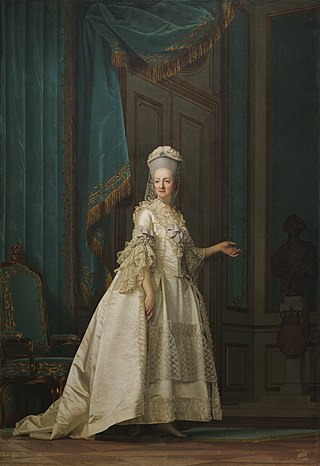 The Dictator is a 1935 British historical drama film directed by Victor Saville and starring Clive Brook, Madeleine Carroll, Emlyn Williams and Helen Haye. The film depicts a dramatic episode in Danish history: the tumultuous relationship between King Christian VII of Denmark and his English consort Caroline Matilda in 18th century Copenhagen and the Queen's tragic affair with the royal physician and liberal reformer Johann Friedrich Struensee. The film is loosely based on real events. In the United States the title was changed to “Loves of a Dictator”.

Events from the year 1772 in Denmark.

The 62nd annual Berlin International Film Festival was held from 9 to 19 February 2012. British film director Mike Leigh was the President of the Jury. The first five films to be screened in the competition were announced on 19 December 2011. American actress Meryl Streep was presented with the Honorary Golden Bear on 14 February. Benoît Jacquot's film Les adieux à la reine was announced as the opening film. The Golden Bear for Best Film went to the Italian film Caesar Must Die, directed by Paolo and Vittorio Taviani, which also served as closing night film. 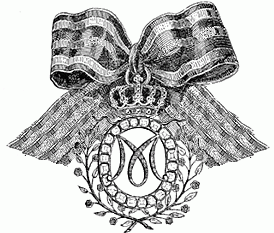 The Order of Mathilde (Mathildeordenen) was a Danish royal order, created by the queen of Denmark, Caroline Matilda of Great Britain, after whom it was named, on the birthday of the king, Christian VII of Denmark, 29 January 1771. It was no longer used after the banishment of its founder the year after.

Livlægens Besøg is a 2009 Danish-language opera by Bo Holten based on the best-selling Swedish novel Livläkarens besök by Per Olov Enquist. 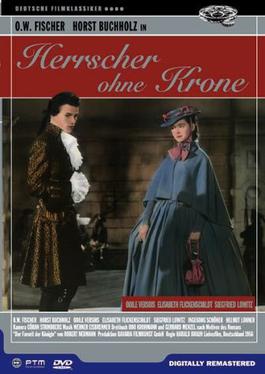