A Wife in Danger

A Wife in Danger (Italian: Una moglie in pericolo) is a 1939 Italian comedy film directed by Max Neufeld and starring Marie Glory, Antonio Centa and Carlo Lombardi. [1] It is a "White Telephone" film, shot at the Cinecittà Studios in Rome. 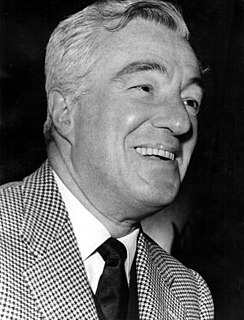 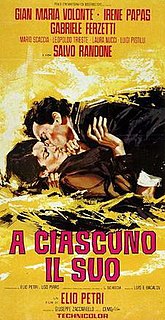 We Still Kill the Old Way is a 1967 Italian crime film directed by Elio Petri. It was entered into the 1967 Cannes Film Festival where it won the award for Best Screenplay. It is based on the novel To Each His Own by Leonardo Sciascia. 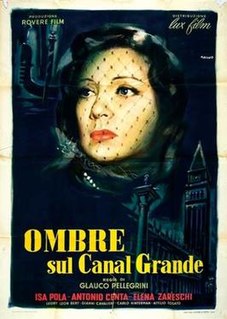 Shadows on the Grand Canal is a 1951 Italian crime film directed by Glauco Pellegrini and starring Isa Pola, Antonio Centa and Carlo Hintermann.

Legislature IV of Italy was the legislature of Italy which lasted from 16 May 1963 until 4 June 1968.

Legislature V of Italy was the legislature of Italy which lasted from 6 June 1968 until 24 May 1972.

Legislature VII of Italy was the legislature of Italy which lasted from 5 July 1976 until 19 June 1979.

Giuseppe Verdi is a 1938 Italian biographical film directed by Carmine Gallone and starring Fosco Giachetti, Gaby Morlay and Germana Paolieri. The film portrays the life of the composer Giuseppe Verdi (1813-1901). The casting of Giachetti as Verdi was intended to emphasise the composer's patriotism, as he had recently played patriotic roles in films such as The White Squadron. The film was made at the Cinecittà Studios in Rome. The film is also known by the alternative title The Life of Giuseppe Verdi.

Headlights in the Fog is a 1942 Italian drama film directed by Gianni Franciolini and starring Fosco Giachetti, Luisa Ferida and Antonio Centa. The film's art direction was by Camillo Del Signore. It was made at the Palatino Studios in Rome and on location in Piedmont and Liguria. 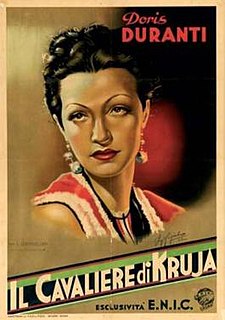 The Cavalier from Kruja is a 1940 Italian war film directed by Carlo Campogalliani and starring Doris Duranti, Antonio Centa and Leda Gloria. The film portrays the 1939 Italian invasion of Albania. It was made as a propaganda work in support of the Fascist regime of Benito Mussolini.

Doctor Antonio is a 1937 Italian historical drama film directed by Enrico Guazzoni and starring Ennio Cerlesi, Maria Gambarelli and Lamberto Picasso. The film is an adaptation of the 1855 novel of the same title by Giovanni Ruffini set during the Risorgimento. It was shot at the Cinecittà Studios in Rome with location shooting on the island of Ischia off Naples. The film's sets were designed by the art director Gherardo Gherardi.

The Secret Lover is a 1941 Italian drama film directed by Carmine Gallone and starring Alida Valli, Fosco Giachetti and Vivi Gioi. It was made at Cinecittà in Rome.

Mizar or Mizar is a 1954 Italian war film directed by Francesco De Robertis. It is notable as the second of only two films produced by Film Costellazione. It was released in France as Mizar , the United Kingdom as Frogman Spy and in the US as The Woman Who Came from the Sea or Frogwoman. It is loosely based on the World War Two actions of the naval officer Luigi Ferraro. 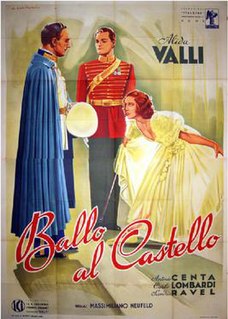 The Castle Ball or Ball at the Castle is a 1939 Italian romantic comedy film directed by Max Neufeld and starring Alida Valli, Antonio Centa and Carlo Lombardi.

Marcella is a 1937 Italian drama film directed by Guido Brignone and starring Emma Gramatica, Caterina Boratto and Antonio Centa. It is based on a play by Victorien Sardou.

It Takes Two to Sin in Love is a 1954 Italian melodrama film directed by Vittorio Cottafavi and starring Giorgio De Lullo, Cosetta Greco and Alda Mangini.