AaB, [2] (full name: Aalborg Boldspilklub, pronounced  [ˈʌlˌpɒˀ ˈpʌlˀtspe̝lˌkʰlup] ) internationally referred to as Aalborg BK [3] is a professional football team located in Aalborg. The club is represented in the Danish Superliga and has won four Danish football Championships and three Danish Cup trophies. Most recently the team won the double in 2014.

AaB was founded on 13 May 1885 by English engineers who were building Jutland's railway system, and the first years was concentrated on the game of cricket. It was initially named Aalborg Cricketklub (Aalborg Cricket club) but the name of the club was changed to Aalborg Boldklub (Aalborg ballclub) in 1899. Football was adopted on an amateur basis in 1902, and has since been the main sport, as the name was changed to the current Aalborg Boldspilklub af 1885 (Aalborg ballgameclub of 1885) in 1906.

In 1995 AaB became the first Danish team to participate in the UEFA Champions League group stage when they were awarded a place because Dynamo Kyiv was expelled from the tournament after one game for attempted match-fixing. AaB qualified for the 2008–09 Champions League and is with two appearances the Danish club who has participated the second most in the tournament after F.C. Copenhagen.

AaB was founded on 13 May 1885 by English engineers who were building Jutland's railway system, and the first years was concentrated on the game of cricket. It was initially named Aalborg Cricketklub (Aalborg Cricket club) but the name of the club was changed to Aalborg Boldklub (Aalborg ballclub) in 1899. Football was adopted on an amateur basis in 1902, and has since been the main sport, as the name was changed to the current Aalborg Boldspilklub af 1885 (Aalborg ballgameclub of 1885) in 1906.

Aalborg BK was part of the top-flight Danish leagues from the 1928–29 season, until the relegation of the club in 1947. The club returned to the best league in 1963, and except from the years of 1972, 1978 and 1981–1986, Aalborg BK has since been a part of the various editions of the Danish football championship. Despite its many years in the Danish championship, the club never won a championship title, but Aalborg BK won the Danish Cup competition in 1966 and 1970. Paid football was introduced in Denmark by the Danish Football Association in 1978. As Aalborg BK returned to the best Danish league, the club founded the professional branch of AaB A/S in 1987 to run a professional football team. [4]

Through the 1990s, the club won its first two Danish championships. In the Danish Superliga 1994-95 season, 24 goals from league topscorer Erik Bo Andersen secured the championship title for the team of coach Poul Erik Andreasen. The club was initially eliminated by Dynamo Kyiv in the qualification matches for the UEFA Champions League 1995-96, but following a bribing scandal Kyiv was banned from the tournament and Aalborg BK entered in their place. Aalborg BK thus became the first Danish team to compete in the UEFA Champions League. As they managed a 2–1 home win over Panathinaikos and a 2–2 draw with Porto in the six matches the club played in the initial group stage, Aalborg BK was eliminated. Erik Bo Andersen left the club for Scottish club Rangers, but in Søren Frederiksen, the club found its next goal-getter. Though not the league top scorer, Frederiksen scored 17 goals in the Danish Superliga 1998-99 which the club won under guidance of Swedish coach Hans Backe. Once again, Aalborg BK faced Dinamo Kyiv in the Champions League qualification, but again felt short, losing 1–2 at home and drawing 2–2 in Kyiv after a late Aalborg BK goal was disallowed for being behind the goal line.

Since then, the club established itself in the top half of the Superliga and won a bronze medal and qualified for the 2007 UEFA Intertoto Cup. Aalborg beat Honka on the away goals rule (2–2 in Finland and 1–1 in Denmark) in the second round, and in the third and final round Aalborg BK faced Gent and drew, 1–1, in the away game but beat them 2–1 in the following home match. Thus they "won" a place in the UEFA Cup's second qualification round and met HJK, the first match ended 2–1 to Helsinki, but in the last match Aalborg BK won 3–0 and were thus ready for the UEFA Cup 2007-08. Drawing the Italian team Sampdoria in the First Round, which have Antonio Cassano and Vincenzo Montella as notable players, made the task seem impossible. Aalborg made it again on the away goal rule (getting 2–2 in Genoa and managing 0–0 in Aalborg), and qualified for the group stage – being the first Danish team ever, to send an Italian team "out of Europe." In the group stage Aalborg BK was seeded in the lowest pot, and drew Anderlecht, Tottenham Hotspur, Getafe, and Hapoel Tel Aviv. Drawing with Anderlecht at home, and losing 2–3 to Tottenham (after being ahead 2–0 after the first half) forced Aalborg to win at home against Getafe, a match Aalborg BK lost 1–2.

In the 2007–08 season, Aalborg won their third Danish Championship and qualified for the 2008–09 UEFA Champions League qualifying rounds. in the second qualifying round, Aalborg easily eliminated FK Modriča 7–1 on aggregate. In the third round, before the group stage, they defeated FBK Kaunas 2–0 both at home and away and reached the group stage of the Champions League for the second time, the first time a Danish team achieved this. In the group stage, they were drawn in Group E along with defending champions Manchester United, Villarreal and Celtic. Aalborg finished third in the group, ahead of Celtic, with 6 points and progressed to the 2008–09 UEFA Cup knockout stage.

Their first match in their UEFA Cup run was against Spanish side Deportivo de La Coruña. Aalborg BK won the first leg at home 3–0 and the second leg at the Estadio Riazor 1–3, securing a 6–1 aggregate. Aalborg BK thereby earned a place among the last 16 teams. where they faced Manchester City. After a 2–0 loss in Manchester in the first leg Aalborg BK fought back to tie the score with a 2–0 win at home. The tie ended in agony however, as Aalborg were defeated by 4–3 on penalties.

On 11 May 2014, the club won their 4th Danish Championship, and four days later the double was secured, as the club defeated F.C. Copenhagen 4–2 in the Cup final.

Since 1920, Aalborg BK has played its games at Aalborg Stadion. The stadium was opened on 18 July 1920 with a north-south aligned playing field. The first spectator seats were built in 1927, and in 1937 a wooden terrace for 3,000 standing spectators was built. In 1960, the stadium burned down and a new east-western aligned concrete stadium was opened in 1962. In recent years the stadium has been enlarged and rebuilt so that it now has modern facilities and roof over all spectator stands. [5] The stadium currently has a capacity of 13,997 people (8,997 seats) or 10,500 people (all seats).

The following managers have coached AaB since it re-entered the Danish top-flight in 1986:

Aalborg Boldspilklub is a Danish sports club based in the city of Aalborg. The club is also known as AaB for short or Aalborg BK. Through time the club has had branches in cricket, tennis, ice hockey, handball, and basketball, but currently controls teams in football, American football, and floorball. All teams are competing in the top-flight Danish league in their respective sport. The kit sponsor for the club is Adidas, and the principal sponsor for the football team is the regional bank Spar Nord.

Kasper Bøgelund Nielsen is a Danish former professional footballer who played as a right-back. Bøgelund played 17 games for the Denmark national team, and he represented Denmark at the 2002 FIFA World Cup and 2004 European Championship.

Martin Pedersen is a Danish former professional football player. He has played 28 games for the Danish under-21 national team, and was selected for the 2006 European Under-21 Championship.

Michael Jakobsen is a Danish professional footballer who plays as a defender for Adelaide United in the A-League. He was named 2002 Danish Under-17 Player of the Year, and has played five games for the Denmark national football team. 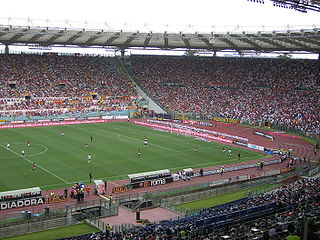 The 1995–96 UEFA Champions League was the 41st season of UEFA's premier European club football tournament, and the fourth since its rebranding as the UEFA Champions League. The tournament was won by Juventus, who beat defending champions Ajax on penalties in the final for their first European Cup since 1985, and their second overall. It was the only Champions League title that Juventus won in the 1990s, despite reaching the next two finals, and one of only three Italian wins in the final, despite there being a Serie A club in every final for seven consecutive years from 1992 to 1998. 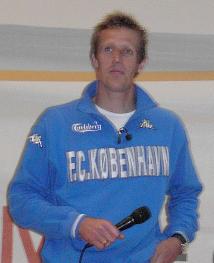 Peter Møller Nielsen is a Danish former professional football player who became a sports journalist after ending his football career in December 2005. He won four Danish Superliga championships for the rival clubs Brøndby IF and F.C. Copenhagen, and became the most scoring Superliga player ever in 2005. He scored five goals in 20 matches for the Denmark national football team, and took part in the 1998 FIFA World Cup. Currently he works as a host on DR1 which is the Danish national channel. Møller is mainly used at the sports news. 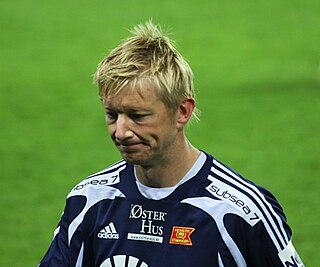 Allan Gaarde is a Danish former professional football player in the midfielder position, who played 227 games and scored 48 goals for AaB, and won the 1999 Danish Superliga championship with the club. He also played abroad for Italian club Udinese Calcio and Norwegian club Viking FK, before ending his career with Vejle Boldklub in Denmark.

Torben Boye is a Danish former professional football (soccer) player, who played his entire career for Danish Superliga club Aalborg Boldspilklub (AaB). Boye has set a number of records for the club, including most played games, as he played 560 matches for AaB. He debuted for AaB as a midfielder in 1984, and following a couple of seasons as a right back he ended in the centre back position. He stopped at the top level following the Danish Superliga 2001-02 season.

Erik Bo Andersen is a Danish former professional footballer who played six matches for the Denmark national team and represented Denmark at UEFA Euro 1996. He played in the striker position and won the 1995 Danish Superliga championship with Aalborg Boldspilklub, the Scottish Premier Division twice with Rangers F.C., and the Norwegian Cup with Odd Grenland. Andersen also played for German club MSV Duisburg, as well as Odense BK and Vejle BK in Denmark.

Lucas de Deus Santos, known as Cacá, is a Brazilian professional footballer who plays for Esporte Clube Santo André as a midfielder.

During the 2008–09 Danish football season, AaB Fodbold competed in the Danish Superliga.