Aafir or Afir (Arabic: أعفير, Kabyle: Aɛfir) is a town and commune located on the Mediterranean Sea within Dellys District, Boumerdès Province, northern Algeria. According to the 1998 census it has a population of approximately 12,613. Aafir is one of three communes in the Dellys district, the others being Ben Choud and Dellys itself. [1]

The commune includes the western part of the forest of Mizrana, where the zawiya of Sidi Mhand Saadi is located. This zawiya was abandoned during the 1990s but is currently being renovated. [2]

Tizi Ouzou is a province (wilayah) of Algeria in the Kabylie region. Its capital is Tizi Ouzou.

Skikda is a province (wilaya) of Algeria, on its eastern Mediterranean coastline.

Ténès District is a district of Chlef Province, Algeria. 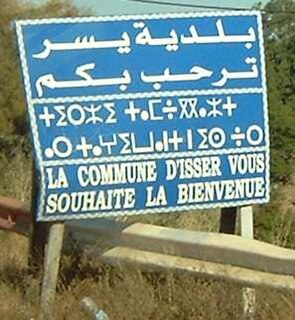 Sidi Makhlouf is a town and commune in Laghouat Province, Algeria. According to the 1998 census it has a population of 8,061.

Hassi Ben Abdellah is a town and commune in Sidi Khouiled District, Ouargla Province, Algeria, located near the provincial capital, Ouargla. According to the 2008 census it has a population of 4,950, up from 3,693 in 1998, and an annual growth rate of 3.0%. The commune covers an area of 1,672 square kilometres (646 sq mi).

Sidi Khouiled is a town and commune, and capital of Sidi Khouiled District, in Ouargla Province, Algeria. It is located near the provincial capital, Ouargla. According to the 2008 census it has a population of 8,803, up from 4,309 in 1998, and has an annual population growth rate of 7.6%, the highest in the province.

Bou-Nouh is a town and commune in Tizi Ouzou Province in northern Algeria. 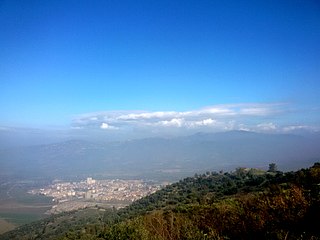 Fez or Fes is a city in northern inland Morocco and the capital of the Fès-Meknès administrative region. It is the second largest city in Morocco after Casablanca, with a population of 1.22 million (2020). Located to the northeast of Atlas Mountains, Fez is situated at the crossroad of the important cities of all regions; 206 km (128 mi) from Tangier to the northwest, 246 km (153 mi) from Casablanca, 189 km (117 mi) from Rabat to the west, and 387 km (240 mi) from Marrakesh to the southwest which leads to the Trans-Saharan trade route. It is surrounded by the high grounds, and the old city is penetrated by the River of Fez flowing from the west to east.

Ahmad u Musa or Sidi Ahmed Oumoussa was a marabout, Muslim saint and spiritual leader of Tazerwalt in the Sous region.

The Zawiya of Sidi Abd el-Aziz is an Islamic religious complex (zawiya) in Marrakesh, Morocco. It is centered around the tomb of the Muslim scholar and Sufi saint Sidi Abu Faris Abd al-Aziz Abd al-Haq at-Tabba', who died in Marrakesh in 1508. Sidi Abd el-Aziz is considered one of the Seven Saints of Marrakesh, and his tomb was a prominent stop for pilgrims to Marrakesh. The zawiya is located on Rue Mouassine at its intersection with Rue Amesfah. 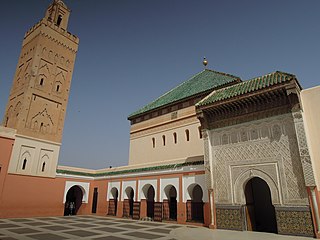 The Zawiya of Sidi Bel Abbes is an Islamic religious complex (zawiya) in Marrakesh, Morocco. The complex is centered around the mausoleum of Abu al-Abbas as-Sabti, who died in 1204 and is the most venerated of the Seven Saints of Marrakesh, often considered the patron saint of the city. The zawiya was originally located outside the city walls, near the former northern gate of Bab Taghzout, but the walls were later extended to encompass the growing neighbourhood around it. The architectural complex itself has evolved and changed over time as well, and features major constructions from the Saadian period in particular.

The Seven Saints of Marrakesh or Patron Saints of Marrakesh are seven historical Muslim figures buried in Marrakesh, Morocco. Each of them was a famous Muslim judge, scholar or Sufi saint (wali) venerated for their piety or other mystical attributes. Their tombs form the basis of a centuries-old annual pilgrimage, a ziyara, during which visitors pray at each of their tombs over the course of seven days.

The Zawiyaof Sidi Abdelkader al-Fassi, also known as the Zawiya al-Fassiya, is historically one of the most important zawiyas in Fes, Morocco. It is named after Sidi Abdelkader al-Fassi, a highly important 17th-century Muslim scholar, mufti, and Sufi saint of the city who is buried in the zawiya. The building is located in the Qalqliyin neighbourhood in the south of Fes el-Bali, the old medina of Fes. It was one of several zawiya sites in the city and across the country which were associated to the al-Fassiya tradition of Sufism.

The Zawiya of Sidi Taoudi Ben Souda is a zawiya and mosque in Fes el-Bali, the old medina of Fes, Morocco. It is named after Muḥammad al-Tāwdī Ibn al-Ṭālib Ibn Sūda al-Murrī, an 18th-century Sufi sheikh who is considered by some to be one of the foremost intellectuals and Muslim scholars of Morocco's history.