Aalesunds Fotballklubb, commonly known as Aalesund or AaFK, is a Norwegian football club from the town of Ålesund, that competes in the Norwegian First Division, the second tier of the Norwegian football league system. The club was founded on 25 June 1914. As of 2004, the football club had 835 members and several teams on both professional and amateur levels. These teams are the 1st and 2nd teams, junior team, and also several age-specific teams.

In 2009 the club won the Norwegian Cup for the first time in its history. They beat rival Molde FK in the Final, and thereby qualified for participation in the UEFA Europa League. Aalesund also won the 2011 Cup Final, where they beat SK Brann.

The local supporter club for AaFK is called "Stormen", or "The Storm", with about 2000 members.

Rival football clubs in the city include Herd, Rollon, Skarbøvik and Spjelkavik, with Molde and Hødd traditionally being the main regional rivals. Hødd has been less competitive with AaFK in recent years, as they have not been in the same division for some time. More recent rivalries have centred on Molde and Strømsgodset, and to some extent Brann.

Aalesund played their home matches at Kråmyra Stadium until the 2005 season, when they relocated to the new Color Line Stadium with an approximate capacity of 11,000 people. Boosted by the new stadium, recent success and general increasing attendance in Norway, Aalesund has gone from attracting crowds of approximately 1,000 to regularly selling out their stadium in only a few years. Their average attendance of 9,943 in the 2006 1. divisjon became at the time a new record for attendances at the second tier of the Norwegian league system.

History of league positions (since 1963) 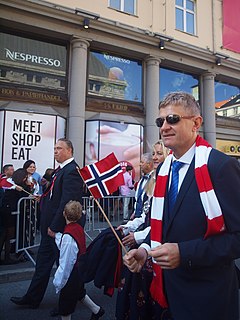 Lars Arne Nilsen is a Norwegian football coach who was the head coach of Eliteserien club SK Brann. From 2015 to 2020

The 2017 season is Aalesunds FK's tenth consecutive season in the Tippeligaen.

The 1994 season was Molde's seventh season in the second tier of Norwegian football since 1963, the first since their last promotion to the first tier in 1983. This season Molde competed in 1. divisjon and the Norwegian Cup.

The 1993 season was Molde's 19th season in the top flight of Norwegian football. This season Molde competed in Tippeligaen and the Norwegian Cup.

The 1988 season was Molde's 14th season in the top flight of Norwegian football. This season Molde competed in 1. divisjon, the Norwegian Cup and the 1988–89 UEFA Cup.

The 1986 season was Molde's 12th season in the top flight of Norwegian football. This season Molde competed in 1. divisjon and the Norwegian Cup.

The 1981 season was Molde's 20th season in the second tier of Norwegian football and their first since their relegation from 1. divisjon in 1980. This season Molde competed in 2. divisjon and the Norwegian Cup.