Last updated April 11, 2021
This article is about a river in Switzerland. For other uses, see Aare (given name), Aare (surname), and Aar (disambiguation).

listen )) is a tributary of the High Rhine and the longest river that both rises and ends entirely within Switzerland. [2] [3]

There are more than 40 hydroelectric plants along the course of the Aare. [5]

The river's name dates to at least the La Tène period, and it is attested as Nantaror "Aare valley" in the Berne zinc tablet.

Right after Innertkirchen it is joined by its first major tributary, the Gamderwasser. Less than 1 kilometre (0.62 mi) later the river carves through a limestone ridge in the Aare Gorge (German : Aareschlucht). [2] It is here that the Aare proves itself to be more than just a river, as it attracts thousands of tourists annually to the causeways through the gorge. [3] A little past Meiringen, near Brienz, the river expands into Lake Brienz. Near the west end of the lake it indirectly receives its first important tributary, the Lütschine, by the Lake of Brienz. It then runs across the swampy plain of the Bödeli (Swiss German diminutive for ground) between Interlaken and Unterseen before flowing into Lake Thun. [2]

Near the west end of Lake Thun, the river indirectly receives the waters of the Kander, which has just been joined by the Simme, by the Lake of Thun. Lake Thun marks the head of navigation. [5] On flowing out of the lake it passes through Thun, and then flows through the city of Bern, passing beneath eighteen bridges and around the steeply-flanked peninsula on which the Old City of Berne is located. The river soon changes its northwesterly flow for a due westerly direction, but after receiving the Saane or La Sarine it turns north until it nears Aarberg. There, in one of the major Swiss engineering feats of the 19th century, the Jura water correction, the river, which had previously rendered the countryside north of Bern a swampland through frequent flooding, was diverted by the Aare-Hagneck Canal into the Lac de Bienne. From the upper end of the lake, at Nidau, the river issues through the Nidau-Büren Canal, also called the Aare Canal, [3] and then runs east to Büren. The lake absorbs huge amounts of eroded gravel and snowmelt that the river brings from the Alps, and the former swamps have become fruitful plains: they are known as the "vegetable garden of Switzerland".

From here the Aare flows northeast for a long distance, past the ambassador town Solothurn [2] (below which the Grosse Emme flows in on the right), Aarburg (where it is joined by the Wigger), Olten, Aarau, [2] near which is the junction with the Suhre, and Wildegg, where the Seetal Aabach falls in on the right. A short distance further, below Brugg it receives first the Reuss, its major tributary, and shortly afterwards the Limmat, its second strongest tributary. It now turns to north, and soon becomes itself a tributary of the Rhine, which it even surpasses in volume when the two rivers unite downstream from Koblenz (Switzerland), opposite Waldshut in Germany. The Rhine, in turn, empties into the North Sea after crossing into the Netherlands. 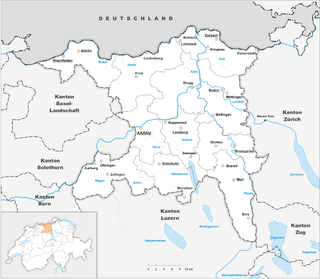 Aargau, more formally the Canton of Aargau, is one of the 26 cantons forming the Swiss Confederation. It is composed of eleven districts and its capital is Aarau. 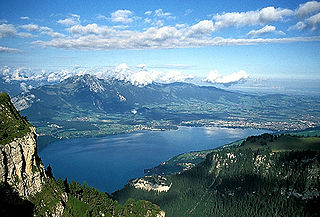 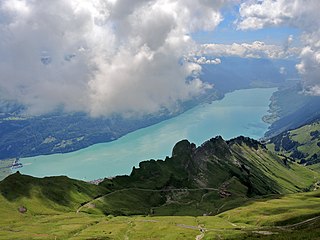 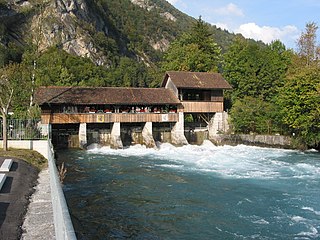 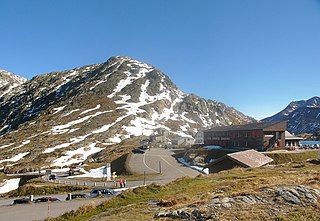 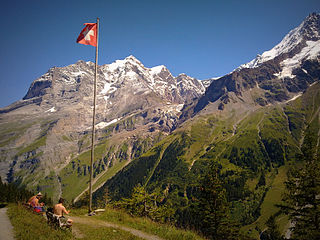 The Swiss Plateau or Central Plateau is one of the three major landscapes in Switzerland, lying between the Jura Mountains and the Swiss Alps. It covers about 30% of the Swiss surface area, and is partly flat but mostly hilly. The average height is between 400 metres (1,300 ft) and 700 metres (2,300 ft) AMSL. It is by far the most densely populated region of Switzerland, the center of economy and important transportation.

The Unteraargau is the lower watershed of the Aar River in the Swiss canton of Aargau.

The Unteraargletscher, literally "Lower Aare-Glacier", is the larger of the two sources of the Aare river in the Bernese Alps. It emerges from the association of the Finsteraargletscher and the Lauteraargletscher and flows for about 6 km (3.7 mi) to the east down to the Grimselsee near the Grimsel Pass. In total the glacier was 12.95 km (8.05 mi) long and 29.48 km2 (11.38 sq mi) in area in 1973. Its lower end is almost 400 metres lower than that of the neighbouring Oberaargletscher.

The correction of the waters of the Swiss Jura consisted of a wide series of hydrological undertakings carried out in Switzerland in the region of the three lakes: Lake Morat connected to Lake Neuchatel by the Broye Canal, the latter connected to Lake Bienne by the Thielle Canal, an area called the "Seeland”.

During the first Jura water correction, a temporary dam had been built across the Nidau-Büren channel in order to maintain the water level in Lake Bienne. Of insufficient retaining capacity, another one in 1887 that also showed its limits, especially during a flood in 1910, quickly replaced it.

The Aabach is a small river that runs through the Swiss cantons of Lucerne and Aargau, in the Aare catchment area. It flows from south to north through the valley called Seetal and ends in the Aare. 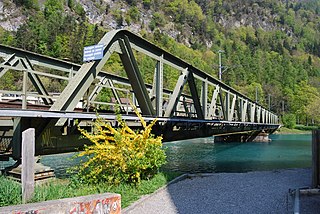 The Baden–Aarau railway line is a railway line in the north of Switzerland. It runs from Baden via Turgi, Brugg AG and Wildegg to Aarau.