Aarhus Gymnastikforening (Danish:  [ˈɒːˌhuˀs kymnaˈstikfʌˌe̝ˀne̝ŋ] ; commonly known as AGFDanish:  [æke̝ˀˈef] ), is a professional sports club based in Aarhus, Jutland, Denmark. Founded in 1880, it is one of the oldest clubs in the country and gymnastics and fencing are featured as its main sports. However, AGF is mostly known for its football department, which was established in 1902. Currently, the club's first team plays in the Danish Superliga, the top flight of the Danish football league system.

In 1911, AGF got its own clubhouse after which the club bought the pitches at Dalgas Avenue. In 1920, AGF began to play its home matches at the newly built Aarhus Stadium, where the club has played ever since. In 1941, the club moved from the clubhouse at Dalgas Avenue to Fredensvang in the suburb of Viby J. [1] For three seasons in a row from 1949 to 1951 AGF finished in third place in the top division. After spending the 1952–53 season in the 2. division, AGF returned strongly to the 1. division and in the next 12 seasons won four Danish Football Championships and five Danish Cups. [2] AGF also participated in the first edition of the European Cup, where it lost to French club Stade de Reims. In 1961, AGF reached the quarter-final in the same tournament where it lost to eventual tournament winners Benfica. [3] AGF was relegated to the 2. division in 1968 and in 1973 but returned to the 1. division in 1976. This was the start of 30 years in the top division.

The introduction of professional football in Denmark had a big influence on the success AGF experienced from the late 1970s and forward until 1998. With the former Real Madrid star Henning Jensen on the team was AGF close at winning the Danish Football Championship in 1982. AGF played 2–2 against B 93 in the last game of the season sending the championship to Odense Boldklub. In 1984 AGF was again close to clinching the championship but lost it by a single point to the rivals from Vejle Boldklub. Finally in 1986 AGF won its fifth Danish Football Championship. Flemming Povlsen, Jan Bartram and John Stampe was the profiles[ clarification needed ] in the team. In 1987, 1988 and 1992 AGF also won the Danish Cup.

In 1998, AGF finished third in the Danish Superliga but financial problems resulted in some poor results the following years. In 2000, Peter Rudbæk was fired after seven years as manager. From 2000 onwards, the club experienced some of its worst ever results, which led to relegations in the 2005–06, 2009–10 and 2013–14 season. Each time, however, the club secured a quick return to the top-flight.

In the summer of 2014, AGF appointed Jacob Nielsen as its new director. Nielsen had been successful as director of Randers where he had managed to secure fine economic results. AGF also hired a new sporting director and Morten Wieghorst as manager. On 6 December 2015, however, Nielsen announced that Wieghorst was fired and that former Danish champion Glen Riddersholm was hired as his replacement.

With Glen Riddersholm as manager AGF finished the 2015–16 season in tenth place having won 3 games, drawn 7, and lost 5 in the remainder of the season. AGF qualified for 2016 cup final losing 2–1 to FC Copenhagen. In the 2016–17 season AGF finished 11th after having played relegation play-off matches in the new league structure introduced that season.

On 30 September 2017 Riddersholm was fired due to inconsistent results. At that point AGF was 7th in the league having started the 2017–18 season with 4 wins, 5 defeats, and 2 draws. Riddersholm's last match was a 5–1 win against FC Helsingør. New manager was David Nielsen who started with 4 consecutive league defeats but finished the season in 7th place after losing a European play-off final against FC Copenhagen 4–1. After reaching 8th place in 2018–19 season, the club managed to keep bronze medal in 2019–20

Their home ground is Aarhus Stadium, renamed Ceres Park for sponsorship reasons since 2015, which has a capacity of 19,433. [4]

As of 31 August 2021 [7] Note: Flags indicate national team as defined under FIFA eligibility rules. Players may hold more than one non-FIFA nationality.

Since 1927, AGF has played 68 seasons at the highest level in Danish football, which is a record. [9]

AGF's first competitive European match was on September 21, 1955, in the 1955–56 European Cup, losing 0–2 at home to France's Stade Reims & eventually losing on aggregate 2–4 in the first round. Since then, the club has participated in numerous UEFA competitions, advancing as far as the quarter-finals of the 1960–61 European Cup and 1988–89 UEFA Cup Winners' Cup.

The Denmark national football team represents Denmark in men's international football competition. It is controlled by the Danish Football Association (DBU), the governing body for the football clubs which are organised under DBU. Denmark's home stadium is Parken Stadium in the Østerbro district of Copenhagen; their head coach is Kasper Hjulmand.

Lars Martin Jørgensen is a Danish former professional footballer played as a midfielder or defender. He works as talent manager for AGF. 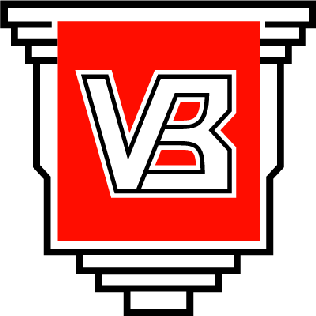 Vejle Boldklub is a Danish professional football club based in Vejle in Jutland. Formed in 1891, the club is one of the most successful clubs in Danish football history, having won the Danish championship five times and the Danish cup title six times. 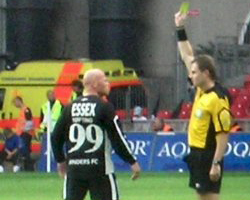 Stig Tøfting, commonly known as Tøffe, is a former Danish professional footballer and assistant coach, who most recently was the assistant of Erik Rasmussen at AGF.

Marc Jensen Rieper is a Danish former professional footballer, who played for AGF and Brøndby in Denmark, West Ham United in England and Celtic in Scotland. Rieper was also a regular player in the Denmark national team, appearing in the Euro 1996 and 1998 FIFA World Cup tournaments. He is the older brother of footballer Mads Rieper.

Kent Nielsen is a Danish professional football manager and former player, who is currently the head coach of Silkeborg IF. He was named coach of the year by the Danish Football Association in 2014 after winning both the Danish Superliga and the Danish Cup with AaB. He started his coaching career as caretaker manager of AGF, before getting his breakthrough with AC Horsens, guiding the club to promotion to the top-flight Superliga championship in 2005. He has also coached Superliga clubs Brøndby IF and OB.

Lars Bastrup Jørgensen is a Danish former professional football player, who most prominently played as a striker for Hamburger SV, winning two Bundesliga titles and the 1983 European Cup with the club. He played 30 matches and scored ten goals for the Danish national team, and won the 1980 Danish Player of the Year award.

Henry Petersen From was a Danish association football goalkeeper. He played 31 games for the Denmark national football team, and won a silver medal at the 1960 Summer Olympics. He spent his entire club career at AGF Aarhus, with whom he won four Danish football championships and four Danish Cups.

The 1964 Danish 1st Division was the 37th season of Denmark's top-flight association football division since the establishment of Danmarksturneringen's nation-wide league structure in 1927, and the 51st edition of the overall Danish national football championship since its inception in 1912. Governed by the Danish FA, the season was launched on 26 March 1964 with a clash between last season's third-placed B 1903 and Østerbro-based and local rivals B.93 with the last round of six matches concluding on 15 November 1964. Esbjerg fB were the defending league champions, having won their third consecutive league title last season, while BK Frem and B.93 entered as promoted teams from the 1963 Danish 2nd Division. Fixtures for the 1964 season were announced by the Danish FA's tournament committee on 6 January 1964, featuring a nine weeks long summer break.

Bent Martin is a Danish former professional footballer who played as a goalkeeper.

Hans Christian Wedelsted Nielsen was a Danish amateur association football defender. He played 25 matches for the Danish national team from May 1958 to June 1961, and won a silver medal at the 1960 Summer Olympics. Born in Odder, Hansen started his career at Odder IGF but would spend most of his career with nearby top-flight club Aarhus Gymnastikforening (AGF).

The 1964 Danish Cup Final was a men's association football match between Esbjerg fB and Odense KFUM played at Københavns Idrætspark on 7 May 1964. It was the final match to determine the winner of the 1963–64 Danish Cup, the 10th season of the Danish national-wide annual football knockout competition, the Danish Cup, open to all DBU member clubs. This was the first time that two sides had ever met in a domestic cup competition and only the third time in a competitive league game. For Odense KFUM, the match represented their first opportunity to win a title on a national level, having never reached the quarterfinals in previous seasons in the cup's current incarnation, while Esbjerg fB were participating in their third cup final, having lost on both previous occasions. This was the third consecutive year the tournament's final featured a team from Odense.