Born in Toronto, Box attended Malvern Collegiate Institute where he played on the football team and later on the Malvern Grads junior team from 1928-1929 under coach Ted Reeve. Box then moved to the senior Ontario Rugby Football Union, again playing under Reeve with the Toronto Balmy Beach Beachers from 1930-1931, winning the Grey Cup in 1930. Box then played three seasons with the Toronto Argonauts, winning another Grey Cup in 1933 and being voted the Jeff Russel Memorial Trophy winner as the most valuable player for 1934. He returned to Balmy Beach in 1935 and played another four years there. 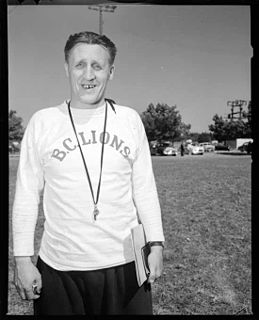 The 1932 Toronto Argonauts season was the club's 46th season since its inception in 1873 and its 23rd season in the Interprovincial Rugby Football Union. The team finished in third place in the IRFU with three wins and three losses and failed to qualify for the playoffs. It proved to be the last of Buck McKenna's four seasons as coach of the Argos, who left the job having amassed an overall record of thirteen wins, ten losses and one tie, and never having won the IRFU title.

Thomas A. Waldon is a former Canadian football player who played for the Toronto Argonauts. He won the Grey Cup with them in 1945 and 1946. He played football at the University of Toronto and for the Toronto Balmy Beach Beachers. In 2013, he retired to Quesnel, British Columbia.