The Abaza family (Arabic : الأسرة الأباظية‎), is an Egyptian family that has had an influential role in Egyptian cultural, economic, intellectual and political life since their establishment in Egypt in the late 18th century to modern times. [1] [2] [3]

It is known as "the family of the pashas" for having produced the largest number of nobles under the Muhammad Ali dynasty from the 19th to the mid-20th Century. While no individual Abaza has been the ruler or president of Egypt, some Egyptian media have referred to them as one of the "families that rule the country", and as "Egypt’s oldest parliamentary dynasty". [2] [3] [4] [5]

They are thought to number around 50,000 members, [3] [5] but no official census has ever been conducted of Circassian communities residing in Egypt and thus the number is highly unreliable.

Abkhazia is a region of the Caucasian Black Sea coast, the home of the Abkhazians and Abazins, ethnic groups related to the Circassian people. The Abazins were one of several ethnic groups living in the Russian Empire who left during the ethnic cleansing of Circassians in the mid-19th century. However, some sources indicate that the Abaza family was well established in the Nile Delta by the late 18th century In Egypt, the Abkhazians took — or were given — the last name "Abaza". [1]

A belief among the Abaza family is that they were named after "a beloved grandmother ... or her place of birth". This maternal ancestor is thought to have married the head of the powerful El Ayed family prior to the reign of Muhammad Ali of Egypt. [1] Many elders of the family sat on the Majlis created by Ibrahim Pasha. The monarchy had also endowed the family with villages and lands allowing the Abazas to flourish. [1]

Hassan Pasha Abaza, is widely considered to be the modern founding father of the family, also titled Sheikh of the Arabs, a title given to the heads of sufficiently influential families at the time. [3] Other Abazas received variations on the title, such as Shiekh Boghdady Pasha Abaza who, along with Hassan Pasha, served in Ibrahim Pasha's Majlis making the Abazas the only family to hold two seats at the same time. [1]

On one occasion, during the accession of the young King Farouk, the Abaza family solicited palace authorities to permit the royal train to stop briefly, at their village, so that the king could partake in refreshments which were offered in a large, ornate tent they had erected at the train station. [7]

In 2014, the family sued Sada Elbalad TV for the creation of a children's cartoon named Abaza and the program was forced off the air. [8] In the same year Egyptian satellite channel CBC Two aired a one-hour documentary about the family. [9]

A lentil dish attributed to Egypt's Abaza family is known in the country as "'ads abazy" (Arabic : عدس أباظي‎). [10]

Notable family members include Wagih Abaza, who served as governor in several Egyptian governorates including Sharqia, Cairo, Beheira and Gharbia. Wagih Abaza was an active member of the Free Officers Movement that toppled the Egyptian monarchy and forced King Farouk to abdicate in 1952. [3]

The family is known for their contributions to modern Arabic literature through the works of Aziz Pasha Abaza and Tharwat Abaza, as well as the journalism and political activism of Fekry Pasha Abaza. [11] Tharwat was a journalist and novelist who opposed the nationalization of the Suez Canal. His best-known novel, A Man Escaping from Time, was televised in the late 1960s. [12]

Rushdy Abaza, an actor with no less than 150 movies to his name was not chosen to star in Lawrence of Arabia but acted "like a star" during the audition. [5]

Other notable members of the family include the longest-serving minister in Egyptian history, Maher Abaza. He was the Minister of Electricity and Energy and is credited with connecting the vast majority of the country's rural areas to the electric grid. [3]

Their main stronghold was the governorate of Sharqia. [1] Several villages in the Nile Delta are named after members of the family, mainly concentrated around the town of Kafr Abaza. For decades, the family had a political monopoly over several districts. [2]

In the 2015 parliamentary elections, three members of the Abaza family won seats in the House of Representatives and this was criticized by some in the media referring to their win as "dynastic heredity". [15] [16] 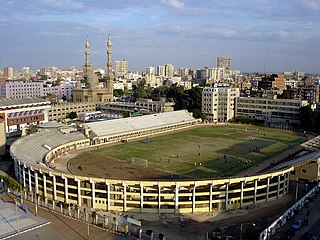 Zagazig is a city in Lower Egypt. Situated in the eastern part of the Nile delta, it is the capital of the governorate of Sharqia.

Sharqia Governorate is the 3rd most populous of the governorates of Egypt. Located in the northern part of the country, its capital is the city of Zagazig. 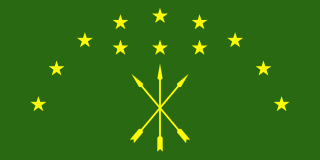 The Circassians, also known by their endonym Adyghe, are a Northwest Caucasian ethnic group native to Circassia, many of whom were displaced in the course of the Russian conquest of the Caucasus in the 19th century, especially after the Russo-Circassian War in 1864. The Circassians mainly speak the Circassian languages, a Northwest Caucasian dialect continuum with three main dialects and numerous sub-dialects. Many Circassians also speak Turkish, Russian, English, Arabic and Hebrew, having been exiled by Russia to lands of the Ottoman Empire, where the majority of them live today. Most Circassians are Sunni Muslim. 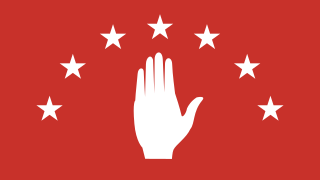 The Abazin, Abazinians or Abaza, are an ethnic group of the Northwest Caucasus, closely related to the Abkhaz and Circassian people. They live mostly in Turkey, Egypt and in Karachay-Cherkessia and Stavropol Krai in the North Caucasus region of Russia. The Tapanta (ru:Тапанта), a branch of the Abaza, lived between the Besleney and Kabardian princedoms on the upper Kuban.

Hind Hussain Mohammed, more commonly known by her stage name Hind Rostom, was an Egyptian actress and is considered one of the seduction icons in the Egyptian cinema, as she was mainly known for her sexy roles. Her physical appearance earned her the name Marilyn Monroe of the east "مارلين مونرو الشرق". Hind Rostom starred in more than 80 movies throughout her career.

The Small Millionaire is an Egyptian 1948 drama film directed and written by Kamal Barakat. It stars Rushdy Abaza and Faten Hamama.

Abazinia, Abazashta or Abaza is a historical country at the northern mountainside of the Caucasus Major, now the northern part of Karachay–Cherkessian Republic, Russia. Abazinia is a home of the Abazins, a people related to the Abkhaz people that speak the Abazin language.

The Turks in Egypt, also referred to as Egyptian Turks, Turkish-Egyptians and Turco-Egyptians are Egyptian citizens of partial or full Turkish ancestry, who are the descendants of settlers that arrived in the region during the rule of several Turkic dynasties, including: the Tulunid (868–905), Ikhshidid (935–969), Zengid (1127–1250), Mamluk (1250–1517), and Ottoman eras. Today their descendants continue to live in Egypt and still identify as Egyptians of Turkish or mixed origin, though they are also fully integrated in Egyptian society.

Pasha or Paşa, in older works sometimes anglicized as bashaw, was a higher rank in the Ottoman political and military system, typically granted to governors, generals, dignitaries and others. As an honorary title, Pasha, in one of its various ranks, is similar to a British peerage or knighthood, and was also one of the highest titles in the 20th century Kingdom of Egypt.

Aziz Abaza was an Egyptian poet. He is known as one of the prominent poets in modern Egyptian and Arab literature.

The Circassian diaspora refers to the resettlement of the Circassian population, especially during the late nineteenth and early twentieth century. From 1763 to 1864, the Circassians fought against the Russian Empire in the Russian-Circassian War, finally succumbing to a scorched-earth campaign initiated in 1862 under General Nicholai Yevdokimov. Afterwards, large numbers of Circassians were exiled and deported to the Ottoman Empire and other nearby regions; others were resettled in Russia far from their home territories. Circassians live in more than fifty countries, besides the Republic of Adygea. Total population estimates differ: according to some sources, some two million live in Turkey, Jordan, Syria, and Iraq; other sources have between one and four million in Turkey alone.

Abaza is a surname.

Zubaida Ahmed Tharwat was an Egyptian film, stage and television actress who was known for "the most beautiful eyes in classic Egyptian cinema". She was known for movies such as "There is a man in our house" (1964) and "Part Virgin" (1961).

The Circassians in Egypt refers to people of present-day Egypt who descended from Circassians, the European ethnic group native to Northwest Caucasus. They were deeply rooted in Egyptian society and the history of the country. For centuries, Circassians have been part of the ruling elite in Egypt, having served in high military, political and social positions. The Circassian presence in Egypt traces back to 1297 when Lajin became Sultan of Mamluk Sultanate of Egypt. Under the Burji dynasty, Egypt was ruled by twenty one Circassian sultans from 1382 to 1517. Even after the abolishment of the Mamluk Sultanate, Circassians continued to form much of the administrative class in Egypt Eyalet of Ottoman Empire, Khedivate of Egypt, Sultanate of Egypt and Kingdom of Egypt. Following the Revolution of 1952, their political impact has been relatively decreased.