Born in Novoselytsia, Bessarabia, Russian Empire, [3] Lerner grew up in a Jewish family, which emigrated to Great Britain when Lerner was three years old. Lerner grew up in London's East End and from age 16 worked as a machinist, a teacher in Hebrew schools, and as an entrepreneur. In 1929, Lerner entered the London School of Economics, where he studied under Friedrich Hayek. A six-month stay at Cambridge in 1934–1935 brought him into contact with John Maynard Keynes. In 1937, Lerner emigrated to the United States. [4] [5] While in the US, he befriended intellectual opponents Milton Friedman and Barry Goldwater. [6]

Lerner never stayed at one institution long, serving on the faculties of nearly a dozen universities and accepting over 20 visiting appointments. [7] Lerner was 62 when he was given a professorship at the University of California, Berkeley in 1965 and left after reaching mandatory retirement age six years later. [7] During his time there, Lerner criticized the unrest caused by the student protests as a threat to academic freedom. [7]

Abba Lerner taught in the Economics Department at Florida State University, for several years. He stopped teaching after he suffered a stroke while visiting Israel.

Although Lerner never received the Sveriges Riksbank's Nobel Memorial Prize in Economic Sciences, he has been recognized as one of the greatest economists of his era. [8]

The economic calculation problem is a criticism of using economic planning as a substitute for market-based allocation of the factors of production. It was first proposed by Ludwig von Mises in his 1920 article "Economic Calculation in the Socialist Commonwealth" and later expanded upon by Friedrich Hayek.

Factor price equalization is an economic theory, by Paul A. Samuelson (1948), which states that the prices of identical factors of production, such as the wage rate or the rent of capital, will be equalized across countries as a result of international trade in commodities. The theorem assumes that there are two goods and two factors of production, for example capital and labour. Other key assumptions of the theorem are that each country faces the same commodity prices, because of free trade in commodities, uses the same technology for production, and produces both goods. Crucially these assumptions result in factor prices being equalized across countries without the need for factor mobility, such as migration of labor or capital flows. 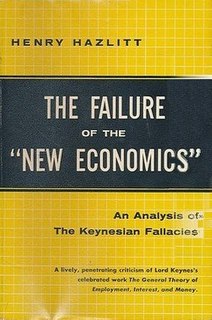 The Failure of the "New Economics" subtitled An Analysis of The Keynesian Fallacies, (1959) is a book by Henry Hazlitt offering a detailed critique of John Maynard Keynes' work The General Theory of Employment, Interest and Money (1936).

The Lerner symmetry theorem is a result used in international trade theory, which states that an ad valorem import tariff will have the same effects as an export tax. The theorem is based on the observation that the effect on relative prices is the same regardless of which policy is applied.

The Lange model is a neoclassical economic model for a hypothetical socialist economy based on public ownership of the means of production and a trial-and-error approach to determining output targets and achieving economic equilibrium and Pareto efficiency. In this model, the state owns non-labor factors of production, and markets allocate final goods and consumer goods. The Lange model states that if all production is performed by a public body such as the state, and there is a functioning price mechanism, this economy will be Pareto-efficient, like a hypothetical market economy under perfect competition. Unlike models of capitalism, the Lange model is based on direct allocation, by directing enterprise managers to set price equal to marginal cost in order to achieve Pareto efficiency. By contrast, in a capitalist economy, private owners seek to maximize profits, while competitive pressures are relied on to indirectly lower the price, this discourages production with high marginal cost and encourages economies of scale.

Economics is an introductory textbook by American economists Paul Samuelson and William Nordhaus. The textbook was first published in 1948, and has appeared in nineteen different editions, the most recent in 2009. It was the best selling economics textbook for many decades and still remains popular, selling over 300,000 copies of each edition from 1961 through 1976. The book has been translated into forty-one languages and in total has sold over four million copies.

Fred Manville Taylor was a U.S. economist and educator best known for his contribution to the theory of market socialism. He taught mostly history at Albion College from 1879 to 1892. He taught in the department of economics at University of Michigan from 1892 to 1929 after receiving his Ph.D. in political philosophy there in 1888. His Principles of Economics (1911) went through 9 editions. Of a libertarian ideology, he was noted as a clear and rigorous expositor of economic theory in the partial-equilibrium lineage of Alfred Marshall.

The social dividend is the return on the capital assets and natural resources owned by society in a socialist economy. The concept notably appears as a key characteristic of market socialism, where it takes the form of a dividend payment to each citizen derived from the property income generated by publicly owned enterprises, representing the individual's share of the capital and natural resources owned by society.

In economics, the Lerner paradox is the theoretical possibility that imposing tariffs raises the world price of the import good, causing a deterioration of the tariff-imposing country's terms of trade. Abba Lerner showed the possibility in his 1936 article.

Wikiquote has quotations related to Abba Lerner .
This page is based on this Wikipedia article
Text is available under the CC BY-SA 4.0 license; additional terms may apply.
Images, videos and audio are available under their respective licenses.