Last updated March 29, 2020
This article is about a former Malaysian politician. For former Burmese politician, see U Razak.
In this Malay name, the name Hussein is a patronymic, not a family name, and the person should be referred to by the given name, Abdul Razak. The Arabic-derived word "bin" or "binti"/"binte", if used, means 'son of' or 'daughter of', respectively.

Tun Razak was the Prime Minister responsible in setting up Barisan Nasional , which is the ruling coalition of political parties that held power in Malaysia till 10 May 2018, with Barisan Nasional losing the 14th Malaysia General Election under his son Najib Razak, taking over from its predecessor, the Alliance. He is also renowned for launching the Malaysian New Economic Policy (MNEP).

After joining the Malay Administrative Service in 1939, he was awarded a scholarship to study at Raffles College in Singapore in 1940. His studies at the college ceased with the onset of the Second World War. During the war he helped organise the Wataniah resistance movement in Pahang. [2]

After World War II, Abdul Razak left for Britain in 1947 to study law. In 1950 he received a law degree and qualified as barrister at Lincoln's Inn in London. During his student days in England, Abdul Razak was a member of the British Labour Party and a prominent student leader of the Malay Association of Great Britain. He also formed the Malayan Forum.

After his studies was interrupted in 1942 because of World War II, Abdul Razak returned to Kuantan, Pahang. He then meets his former colleague from the Malay Administrative Service, Yeop Mahidin and express his interest to join the Malay Regiment (now Royal Malay Regiment). Mahidin, who also the founder of Askar Wataniah Pahang ('Pahang State Territorial Army'; precursor of Rejimen Askar Wataniah ) recruited Razak into his new guerrilla forces. After finishing his training under Mahidin, Razak was instructed by Mahidin to join the Japanese Malayan Civil Service as an agent and informant. [3] [4]

After finishing his Japanese Military Training, Razak, as an aristocrat and son of a respected Malay leader in Pahang, were posted to his home-state Pahang as an assistant to District Officer and at the same time as a bridge for the Japan to gain trust of local Pahang Malays. Using his privileges as an aristocrat, Razak starts making networking with the Japanese Imperial Forces in the same time maintaining his connection with Yeop Mahidin. His role as an informant inside the Japanese Administration is known only to a few of Wataniah members including Mahidin. Because of this, Razak was labelled as a traitor by the rest of the Wataniah Pahang. [3] [4] [5]

At first, the Malays were not fully trusted by the British to fight the Japanese because of few incidents and better treatments by the Japanese Administration towards the Malays if compared to other races. After gaining sufficient trust, the Askar Wataniah Pahang with its 200 members was absorbed into the Special Operations Executive (SOE) and made to Force 136 Pahang. [3] [4] [5]

The Force 136 Pahang's missions always meet with success made the Japanese Administration began to suspect there is informants inside theirs administration. Force 136 Pahang quickly set up an extraction mission to recover theirs agent, Razak, who is unknown to many of its members. [3] [4]

After he had been successfully extracted, Razak continued his work with Force 136 and was promoted to the rank of Captain. Among notable missions, Razak was involved in the rescue of Sultan Abu Bakar of Pahang from MPAJA. [3] [4]

Upon his return from the United Kingdom, in 1950, Tun Razak joined the Malayan Civil Service. [1] Owing to his political calibre, he became the youth chief for United Malays National Organisation (UMNO). Two years later, he worked as the Assistant State Secretary of Pahang and in February 1955, at just 33 years of age, became Pahang's Chief Minister.

Razak stood in and won a seat in Malaya's first general elections in July 1955 and was appointed as the Education Minister. He was instrumental in the drafting of the Razak Report which formed the basis of the Malayan education system. Tun Razak was also a key member of the February 1956 mission to London to seek the independence of Malaya from the British. [1]

After the general elections in 1959, he became the Minister of Rural Development in addition to holding the portfolios of Deputy Prime Minister and Minister of Defence, which he held from 1957. [1] His achievements include formulating the development policy known as the Red Book.

At the time of Separation of Singapore from the Federation of Malaysia in 1965, Tun Razak realised that UMNO needed more young leaders in the party. Faced with, amongst other things Lee Kuan Yew's considerable rhetorical skills, Razak wanted young Malay leaders – grounded in their own faith and culture – who would be able to speak and if necessary debate both in the Malay language and English language.

Razak understood that power resided in the Malay community and that for this power to be wielded effectively, the elite among the Malays had to be an elite determined by ability, aptitude and commitment to the nation as a whole. Class, birth and money were secondary in his calculations.

As a consequence of this initiative, the then young leaders of mixed heritage in UMNO, such as Mahathir Mohamad, were drafted into higher echelons of the political establishment.

In 1967 he was awarded the Ramon Magsaysay Award for community leadership.

After the 13 May Incident in 1969, Tunku Abdul Rahman Putra received many criticisms from various parties for his inability to deal with racial issues. This led to his resignation as prime minister. Tun Abdul Razak then imposed a State of Emergency, ruling by decree as the National Operations Council until 1970. [1] In September 1970, Tunku Abdul Rahman was succeeded by Tun Abdul Razak as the Prime Minister of Malaysia.

Tun Razak set up the Barisan Nasional or National Front on 1 January 1973 to replace the ruling Alliance Party. He increased the membership of its parties and coalitions in an effort to establish "Ketahanan Nasional" (National Strength) through political stability.

Tun Razak is also renowned for launching the Malaysian New Economic Policy (MNEP) in 1971. He and the "second generation" of Malay politicians saw the need to tackle vigorously the economic and social disparities which fuelled racial antagonisms and violence. The MNEP set two basics goals – to reduce and eventually eradicate poverty, and to reduce and eventually eradicate identification of economic function with race.

Abdul Razak died in office on 14 January 1976 [1] while seeking medical treatment in London. He was posthumously granted the soubriquet Bapa Pembangunan ('Father of Development'). He was laid to rest in Heroes Mausoleum (Malay : Makam Pahlawan) near Masjid Negara, Kuala Lumpur.

Things named after him

Several things were named after him, including: 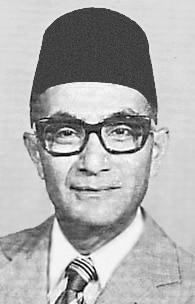 Tun Hussein bin Dato' Onn, was the third Prime Minister of Malaysia, serving in this role from 1976 to 1981. Moreover, he was the Member of Parliament for Sri Gading from 1974 to 1981, representing Barisan Nasional and UMNO. He was granted the soubriquet "Bapa Perpaduan".

Sultan Haji Ahmad Shah Al-Musta’in Billah ibni Almarhum Sultan Abu Bakar Ri’ayatuddin Al-Mu’azzam Shah was the fifth modern Sultan of Pahang, and also served as the seventh Yang di-Pertuan Agong of Malaysia from 26 April 1979 to 25 April 1984. His abdication as Sultan was decided by the Royal Council at an extraordinary meeting on 11 January 2019. A special amendment was passed on the state constitution that gave the body more power for this decision, citing the Sultan's incapability to rule due to his failing health. The abdication announced the next day which was retroactively effective on the day of the Royal Council meeting, paving the way to his son, Abdullah to succeed him as Sultan the immediately, and subsequently be elected as the next Yang di-Pertuan Agong later the same month.

Tun Dr. Ismail bin Dato' Abdul Rahman was a Malaysian politician from the United Malays National Organisation (UMNO). He held several Malaysian ministerial posts and was appointed as the second Deputy Prime Minister in 1970 by then prime minister Tun Abdul Razak. Three years later, Ismail died in office due to a heart attack. Ismail has been called "the man who saved Malaysia" for his actions as Minister of Home Affairs after the May 13 Incident of racial rioting in 1969.

Tun Abdul Ghafar bin Baba was a Malaysian politician from Malacca who was Deputy Prime Minister of Malaysia from 1986 to 1993.

The Rejimen Askar Wataniah is the military reserve force of the Malaysian Army. An equivalent formation in the British Army would be the Territorial Army.

Mohamed Noah bin Omar was a Malaysian politician. He was one of the leading figures during the founding of the United Malays National Organisation (UMNO) and became the first Speaker of the Dewan Rakyat.

This article lists important figures and events in Malayan and Malaysian public affairs during the year 1963, together with births and deaths of significant Malaysians. The Federation of Malaya merged with Singapore, North Borneo, and Sarawak to form the Federation of Malaysia on 16 September.

This article lists important figures and events in Malaysian public affairs during the year 1973, together with births and deaths of notable Malaysians.

This article lists important figures and events in Malaysian public affairs during the year 2006, together with births and deaths of notable Malaysians. 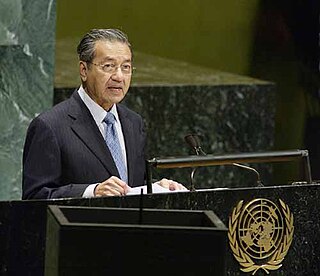 This article lists important figures and events in Malaysian public affairs during the year 1981, together with births and deaths of notable Malaysians. 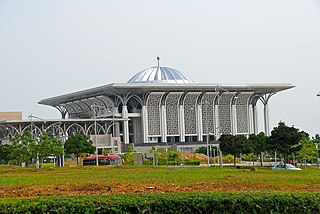 This article lists important figures and events in Malaysian public affairs during the year 2010, together with the deaths of notable Malaysians. Malaysia Day, 16 September was celebrated as a national holiday for the first time.

2011 in Malaysia is the 54th anniversary of Malaysia's independence.

The Malaysian Matriculation Programme is a one or two-year pre-university preparatory programme offered by the Ministry of Education, Malaysia. Starting 2005, the selection process for the programme is done through a race-based quota system, where 90% of the places are reserved for bumiputeras students while the remaining 10% are open for non-bumiputeras. 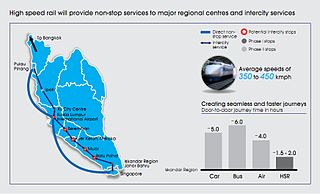 2013 was the 56th anniversary of Malaysia's independence.

The following is an alphabetical list of articles related to Selangor.

The 2019 Malaysia FA Cup is the 30th season of the Malaysia FA Cup, a knockout competition for Malaysia's state football association and clubs. The winners will be assured a place for the 2020 AFC Champions League preliminary round 2.