The Museum Abteiberg is a municipal museum for contemporary art in the German city Mönchengladbach.

Since the 1970s, the museum has been known for its experimental and avant-garde exhibitions, starting with director Johannes Cladders (1967-1985), and also its museum architecture, designed by Austrian architect Hans Hollein - a highpoint of postmodern design.

Directors of the Museum

Buildings of the Museum

On the collection of the museum

About the architecture of the museum

Museum Ludwig, located in Cologne, Germany, houses a collection of modern art. It includes works from Pop Art, Abstract and Surrealism, and has one of the largest Picasso collections in Europe. It holds many works by Andy Warhol and Roy Lichtenstein.

Hilmar Friedrich Wilhelm Bleyl, known as Fritz Bleyl, was a German artist of the Expressionist school, and one of the four founders of artist group Die Brücke. He designed graphics for the group including, for their first show, a poster, which was banned by the police. He left the group after only two years, when he married, to look after his family, and did not exhibit publicly thereafter.

The Arbeitsrat für Kunst was a union of architects, painters, sculptors and art writers, who were based in Berlin from 1918 to 1921. It developed as a response to the Workers and Soldiers councils and was dedicated to the goal of bringing the current developments and tendencies in architecture and art to a broader population.

Georg Nees was a German academic who was a pioneer of computer art and generative graphics. He studied mathematics, physics and philosophy in Erlangen and Stuttgart and was scientific advisor at the SEMIOSIS, International Journal of semiotics and aesthetics. In 1977, he was appointed Honorary Professor of Applied computer science at the University of Erlangen Nees is one of the "3N" computer pioneers, an abbreviation that has become acknowledged for Frieder Nake, Georg Nees and A. Michael Noll, whose computer graphics were created with digital computers.

The Dresden City Art Gallery is the municipal art collection of Dresden, Germany, housed in the city's Landhaus. It was formed by the 19th and 20th century artworks of the Stadtmuseum Dresden, split off from the Museum and given a separate display in 2000. In 2002, Dr Gisbert Porstmann became the founding director of the Dresden City Art Gallery, which officially opened in 2005.

Wilhelm Peter Hubert Fick, called Willy Fick, was a German graphic artist born in Cologne. He belonged to the Dada movement, and in 1919 became a founding member of the artist circle called Stupid, together with Heinrich Hoerle, Angelika Hoerle (1899–1923), who was the sister of Willy Fick and the wife of Heinrich Hoerle, Anton Räderscheidt, his wife Marta Hegemann, and Franz Wilhelm Seiwert. Fick was a Cologne dadaist from 1916 until 1923 and a scholarship student of Jan Thorn-Prikker at the Cologne School of Applied Arts /Kölner Werkschulen from 1928 until 1931. Duesseldorf art agent Johanna Ey represented his Weimar period works. Many works were destroyed by bombing in World War II but preserved in archival photographs in the Rheinisches Bildarchiv / Rhineland Picture Archive. Fick painted and cartooned until his death in Canada in 1967. 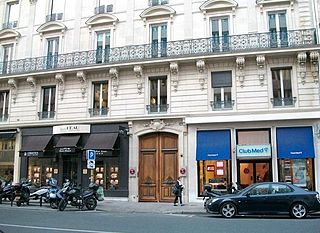 The Exposition Internationale du Surréalisme was an exhibition by surrealist artists that took place from January 17 to February 24, 1938, in the generously equipped Galérie Beaux-Arts, run by Georges Wildenstein, at 140, Rue du Faubourg Saint-Honoré in Paris. It was organised by the French writer André Breton, the surrealists' brain and theorist, and Paul Éluard, the best known poet of the movement. The catalogue listed, along with the above, Marcel Duchamp as generator and arbitrator, Salvador Dalí and Max Ernst as technical advisers, Man Ray as head lighting technician and Wolfgang Paalen as responsible for the design the entrance and main hall with "water and foliage". The exhibition was staged in three sections, showing paintings and objects as well as unusually decorated rooms and mannequins which had been redesigned in various ways. With this holistic presentation of surrealist art work the movement wrote exhibition history.

Wiebke Siem is a German mixed media artist of German and Polish heritage, winner of the prestigious Goslarer Kaiserring in 2014 as "one of the most innovative and original artists who has never compromised in their art and whose sculptures have a tremendous aura and presence because they mix the familiar and the unfamiliar, the known and the unknown".

The Thüringer Symphoniker Saalfeld-Rudolstadt is a symphony orchestra based at Rudolstadt in Thuringia.

Goethe Plaque of the City of Frankfurt is an award conferred by Frankfurt, Hesse, Germany and named after Johann Wolfgang von Goethe. The plaque was originally designed by sculptor Harold Winter. The plaque is awarded at irregular intervals to important poets, writers, artists, scientists and other personalities of the cultural life.

Curt Glaser was a German Jewish art historian, art critic and collector who was persecuted by the Nazis.

Greta Saur (Sauer) was a German painter who lived and worked in Paris. She was an abstract painter, specifically in the style of lyrical abstraction of the "Nouvelle Ecole de Paris".

The Kunstsammlungen Zwickau – Max Pechstein Museum is a department of the Städtisches Museum Zwickau founded in 1925, which was inaugurated on 23 April 1914 as the King Albert Museum