Yusuf was the son of Abd al-Mu'min, the first caliph of the Almohad dynasty. His mother was Safiyya bint Abi Imran, a masmuda woman, the daughter of Abu Imran Musa ibn Sulayman Al-kafif, a companion of Ibn tumart from Tinmel. [3] [4] Like a number of Almohad rulers, Yusuf favored the Zahirite or literalist school of Muslim jurisprudence and was a religious scholar in his own right. He was said to have memorized Sahih Bukhari and Sahih Muslim, two collections of Muhammad's statements considered canonical in Sunni Islam, by heart, and was a patron of the theologians of his era. [5] Respected men of letters such as Ibn Rushd and Ibn Tufayl were entertained at his court. [6] Yusuf favored Cordoban polymath Ibn Maḍāʾ as his chief judge; during the Almohad reforms, the two oversaw the banning of any religious material written by non-Zahirites. [7] Yusuf's son al-Mansur would eventually take the reforms even further, actually burning non-Zahirite books instead of merely banning them. [8]

In 1170 he invaded Iberia, conquering al-Andalus and ravaging Valencia and Catalonia. The following year he established himself in Seville. [9] He ordered the construction of numerous buildings, such as the Alcazar, the Buhaira palace and the fortress of Alcalá de Guadaíra.

Abu Ya'qub Yusuf was wounded at the Siege of Santarém (1184), in which he died on the road to Seville, near Évora. [10] His body was sent from Seville to Tinmel where he was buried. [1]

The Almohad Caliphate was a North African Berber Muslim empire founded in the 12th century. At its height, it controlled much of the Iberian Peninsula and North Africa.

Abū Yūsuf Yaʿqūb ibn Yūsuf ibn Abd al-Muʾmin al-Manṣūr, commonly known as Jacob Almanzor or Moulay Yacoub, was the third Almohad Caliph. Succeeding his father, al-Mansur reigned from 1184 to 1199. His reign was distinguished by the flourishing of trade, architecture, philosophy and the sciences, as well as by victorious military campaigns in which he was successful in repelling the tide of the Reconquista in the Iberian Peninsula. 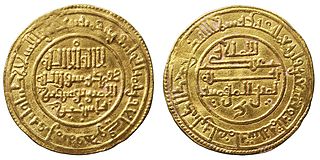 Yusuf ibn Tashfin, also Tashafin, Teshufin, was leader of the Berber Almoravid empire. He co-founded the city of Marrakesh and led the Muslim forces in the Battle of Sagrajas. Ibn Tashfin came to al-Andalus from Africa to help the Muslims fight against Alfonso VI, eventually achieving victory and promoting an Islamic system in the region. He was married to Zaynab an-Nafzawiyyah, whom he reportedly trusted politically.

Battle of Alarcos, was a battle between the Almohads led by Abu Yusuf Ya'qub al-Mansur and King Alfonso VIII of Castile. It resulted in the defeat of the Castilian forces and their subsequent retreat to Toledo, whereas the Almohads reconquered Trujillo, Montánchez, and Talavera.

‘Iyad ibn Musa (1083–1149), born in Ceuta, then belonging to the Almoravid dynasty, was the scholar of Maliki fiqh and great imam of that city and, later, a qadi in the Emirate of Granada.

Abu al-Abbas Ahmad bin Abd al-Rahman bin Muhammad bin Sa'id bin Harith bin Asim al-Lakhmi al-Qurtubi, better known as Ibn Maḍāʾ was an Arab Muslim polymath from Córdoba in Islamic Spain. Ibn Mada was notable for having challenged the traditional formation of Arabic grammar and of the common understanding of linguistic governance among Arab grammarians, performing an overhaul first suggested by Al-Jahiz two-hundred years prior. He is considered the first linguist in history to address the subject of dependency in the grammatical sense in which it is understood today, and was instrumental during the Almohad reforms as chief judge of the Almohad Caliphate.

Abu al-Abbas Ahmad ibn Ja'far al-Khazraji al-Sabti, better known as Sidi Bel Abbas, was a Moroccan Muslim saint. He is the patron saint of Marrakesh in the Islamic tradition and also one of the "Seven Saints" of the city. His festival was founded by al-Hasan al-Yusi at the instigation of Moulay Ismael.

Yakub or Yaqub is a male given name. It is the Arabic version of Jacob and James. The Arabic form Ya'qūb/Ya'kūb may be direct from the Hebrew or indirectly through Syriac. The name was in use in pre-Islamic Arabia and is a common given name in Arab, Turkish, and Muslim societies. It is also used as a surname. It is common in Polish, Czech and Slovak languages, where it is transliterated as Jakub.

ʻAbd al-Salām ibn Mashīsh al-ʻAlamī was a Moroccan Sufi saint who lived during the reign of the Almohad Caliphate.

Almohad doctrine or Almohadism was the ideology underpinning the Almohad movement, founded by Ibn Tumart, which created the Almohad Empire during the 12th to 13th centuries. The reformist ideology and policies of the Almohads involved a series of attempted radical changes to Islamic religious and social doctrine under their rule. These policies affected large parts of the Maghreb and altered the existing religious climate in al-Andalus for many decades. They marked a major departure from the social policies and attitudes of earlier Muslim governments in the region, including the preceding Almoravid dynasty which had followed its own reformist agenda. The religious fundamentalism of the Almohad Caliphate lead to emigration of Jews and Christians from southern Iberia to the Christian north and North Africa, specifically Egypt.

Ahmad Shawqi Daif was an Arabic literary critic and historian. He is considered one of the most influential Arab intellectuals in the 20th century.

The Ẓāhirī madhhab or al-Ẓāhirīyyah is a school of Islamic jurisprudence founded by Dawud al-Zahiri in the ninth century, characterised by reliance on the outward (ẓāhir) meaning of expressions in the Qur'an and hadith, as well as rejection of analogical deduction (qiyās). After a limited success and decline in the Middle East, the Ẓāhirī school flourished in the Caliphate of Córdoba, particularly under the leadership of ibn Hazm, whose book Al-Muhalla is considered to be adiwalu al fiqhi dhahiri. It is variously said to have "survived for about 500 years in various forms" before being "merged with the Ḥanbalī school", but also to have been revived in the mid-20th century in parts of the Muslim world.

Abu Zayyan (I) Muhammad ibn Abi Said Uthman ibn Yaghmurasan, known as Abu Zayyan I, was the third Zayyanid Sultan of the Kingdom of Tlemcen. He succeeded his father Abu Said Uthman I on June 6, 1304.