The Academia Antártica ("Antarctic Academy") was a society of writers, poets and intellectuals—mostly of the criollo caste—that assembled in Lima, Peru, in the 16th and 17th Centuries. Their objective was to author a body of literature that matched or surpassed that of Europe's and would prove that literariness indeed thrived in Spain's remotest colonies. [1] Members of this collective together published several anthologies of original writings and translations, the most famous of which are the Primera parte del Parnaso Antártico de obras amatorias (Antarctic Parnassus, Part One: Poems of Romance) and the Segunda parte del Parnaso Antártico de divinos poemas (Antarctic Parnassus, Part Two: Poems of the Divine). [lower-alpha 1] These are dated 1608 and 1617, respectively. [2]

In the late 16th Century, Lima, Peru, was a vibrant cultural center characterized by a widespread appreciation for literature. [3] Even in "mills, mines and haciendas", not to mention in the homes of the aristocracy, classical Greek and Roman texts were circulated heavily. [4] These included the writings of Aristotle, Herodotus, Petrarch, Cicero and Ovid. [5] Indeed, one of the Academia's most distinguishing features is its members' imitations of—and relentless allusions to—classical canonical texts. [6]

The literary community in Lima was keenly attentive to cultural trends in Europe. [7] It is likely that certain Limeño writers felt compelled to form the Academia Antártica in the last decades of the 16th Century because similar societies had sprung up in Seville around that same time. [8] Because no records documenting the society's gatherings or membership roster remain, little else is known for certain about the Academia. [9] Most of the information we have about its mission and affiliates comes from only three sources: (1) a sonnet composed by Gaspar de Villaroel that appears in the Arauco domado (1596) and is dedicated to the society; (2) the lyric poem "Discurso en loor de la poesía", which is attributed to the enigmatic Clarinda and praises many of the Academia's members; and (3) a sonnet named "Academia" that was written by Pedro de Oña. [10]

Scholars debate the organization and membership of the Academia Antártica—at least one critic has even suggested that it was actually just a branch of the University of San Marcos; [6] however, there is little disagreement about the society's mission to spread the word that in Lima world-caliber literary geniuses thrived. [6] Under the scrutiny of recent post-colonial theorists, the society's name has been interpreted as a deliberately hybrid intended to unite literary customs ("Academia") and spaces where they existed without recognition ("Antártica"). [9] The original poetry associated with the Academia, in particular Clarinda's "Discurso en loor de la poesía" ("Discourse in Praise of Poetry"), seems to confirm that its members resented Europe's reluctance to acknowledge as talented the poets who lived and wrote in the American colonies. [9]

To modern readers, the Academia's writing may seem more European in style and theme than American. This may be due to the collective's emphasis on the translation and imitation of classical works, the adherence to then-popular Petrarchan tropes, and the general absence of references to indigenous peoples and folklore. Nevertheless, the Academia represents an important step toward the achievement of a Peruvian national literature and its recognition by European intellectuals. [11] This recognition may have come from Spain's most influential author himself, Miguel de Cervantes, who in his Canto a Calíope (1583) celebrates the literature generated in Spain's American colonies, though he does not mention the Academia Antártica by name. [6]

The most influential of the Academia Antártica's works, the Primer parte del Parnaso Antártico de obras amotorias (Antarctic Parnassus, Part One: Poems of Romance) was printed in Seville in 1603. [12] Its centerpiece is the new Spanish-language translation of Ovid's Heroides , penned by Diego Mexía de Fernangil, a Spaniard who traveled extensively in Mexico and Peru and was a fundamental member of the Academia. [13] The volume also contains Mexía's "El autor a sus amigos" ("From the Author to His Friends"), a narrative of his travels through the Spanish Empire. [13]

The publication's cover features an emblem and motto that more or less summarize the Academia's objective (see the facsimile to the right). The motto reads: "Si Marte llevó a ocaso las dos colunas; Apolo llevó a Antártico las Musas y al Parnaso" ("If Mars bore the two columns [marking the boundary of known world] off to the West, Apollo carried off the Muses to Parnassus and the Antarctic."). [14] The Antarctic was, in the time of Spanish colonization, a nickname for Peru—the place Mexía says the gods now favor with poetry. [13]

Preceding Mexía's translation is a collection of lyric poems written by fellow members of the Academia Antártica and in praise of the author's work. The most notable of these is Clarinda's "Discurso en loor de la poesía" ("Discourse in Praise of Poetry"), which also invokes figures from Greek and Roman mythology to lionize the literary genius of colonial Peruvian writers. Due in part to 20th-Century feminist and post-colonial analyses, Clarinda's "Discurso" has surpassed Mexía's translation in respect and canonization and has become the Academia's "most celebrated" product. [6]

The two afore-mentioned publications, and the lost third volume, are the publications most often associated with the Academia Antártica as a collective. However, many of the society's members published other works independently and collectively that also reflect the Academia's influences. These include Carlos de Balboa's Miscelánea Antártica (1586) and Diego Dávalos de Figueroa's Miscelánea Austral (1602). [15]

This list is adopted from the one presented in Sonia Rose's essay, and the categorization is hers; however, the Spanish-language Wikipedia article includes additional names that could not be verified.

Authors known only by reference:

Antonio Alfonso Cisneros Campoy was a Peruvian poet, journalist and academic. He was born in Lima on 27 December 1942 and died there of lung cancer on 6 October 2012, aged 69.

Antonio Cornejo-Polar was a Peruvian-born academic, teacher, literature and cultural critic, known particularly for his theorization of the concept of "heterogeneity."

Pedro de Oña (1570–1643) is considered the first known poet born in Chile, and is best remembered for his verse epic poem Primera parte de Arauco domado. Born in Angol, he was the son of a military captain, Gregorio de Oña, who had perished during the conquest of Chile by Spain. Pedro de Oña grew up amid this ongoing conflict; he was born in what was then a small military post, in a territory largely controlled by Chile's indigenous peoples. 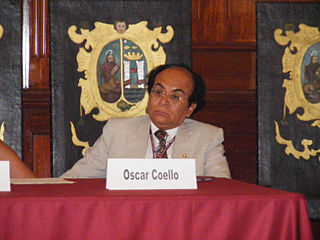 Oscar Coello, is a Peruvian poet, professor and literary critic. He holds the chairs of American literature, and rhythm at the National University of San Marcos in Lima.

José de la Riva-Agüero y Osma, 6th Marquess of Montealegre de Aulestia and 5th of Casa-Dávila was a Peruvian historian, writer and politician who served as Prime Minister of Peru, Minister of Justice and Mayor of Lima.

Clarinda was the pen name used by an anonymous Peruvian poet, generally assumed to be a woman, who wrote in the early 17th Century. The only work attributed to her is the long poem Discourse in Praise of Poetry, which was printed in Seville in 1608. She is one of very few female, Spanish-speaking colonial-period poets whose work has not been lost. Thus, she is often read in partnership with Mexico's Sor Juana Inés de la Cruz and fellow Peruvian "Amarilis", whose identity is also uncertain.

José Antonio Mazzotti is a Peruvian poet, scholar, and literary activist. He is Professor of Latin American Literature and King Felipe VI of Spain Professor of Spanish Culture and Civilization in the Department of Romance Studies at Tufts University, President of the International Association of Peruvianists since 1996, and Director of the Revista de Crítica Literaria Latinoamericana since 2010. He is considered an expert in Latin American colonial literature, especially in El Inca Garcilaso de la Vega and the formation of criollo cultures, a critic of Latin American contemporary poetry, and a prominent member of the Peruvian 1980s literary generation. He received the José Lezama Lima special poetry prize from Casa de las Américas, Cuba, in 2018, for his collection El zorro y la luna. Poemas reunidos, 1981-2016.

Mohsen Emadi is an Iranian poet, translator and filmmaker.

Sister María Ignacia, OSC, born Bertilda Samper Acosta was a Colombian Poor Clare nun, poet and writer. She was the daughter of José María Samper Agudelo and Soledad Acosta Kemble, both renowned writers and journalists of their time in Colombia.

Niall Binns is a British poet who lives in Spain and writes in Spanish. 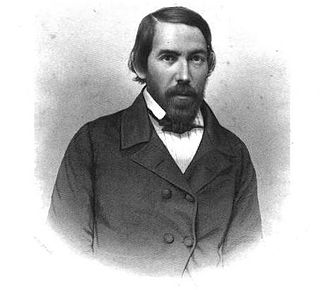 José Jacinto Milanés y Fuentes, a self-educated and from humble origins, was a renowned poet, linguist and writer who has been acclaimed as one of the best exponents of Cuban literature with the publication of his magnum opus El Conde Alarcos (1838). Milanés is also considered the best playwright of Cuba. Some of his other works include El poeta en la Corte, Por el puente o por el río, and A buena hambre no hay pan duro.

Aurelio González Ovies is a Spanish writer and poet from Asturias. He has a Ph.D in Classical Philology and he is a Professor of Latin Philology at the University of Oviedo. In words of the writer Victor Alperi: 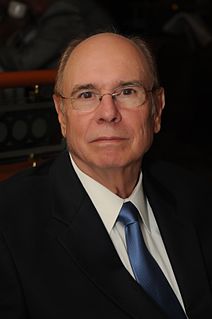 Vilma Reyes Díaz is a Puerto Rican poet, storyteller and educator. She has served as a teacher of Spanish language and has chaired the International Poetry Festival in Puerto Rico since 2010. She has been an influence on young Puerto Ricans in literary creation by offering free workshops for children and youth poetry and has published several books as a result of that work.

The Parnaso Español: colección de poesías escogidas de los más célebres poetas castellanos, or simply Parnaso Español, is an anthology edited by Juan José López de Sedano. It was published in nine volumes, between 1768 and 1778. The first five volumes were printed by Joaquín Ibarra by request of Antonio de Sancha, who printed the remaining volumes in his newly inaugurated press.

Isabel Ángela Prieto González Bango, better known as Isabel Prieto de Landázuri, was a Spanish poet and dramatist, considered "one of the first women to enter the literary canon of Mexico in the 19th century," since this country was where she created most of her literary legacy.