Acarology (from Ancient Greek ἀκαρί /ἄκαρι, akari, a type of mite; and -λογία , -logia) is the study of mites and ticks, [1] the animals in the order Acarina. It is a subfield of arachnology, a subdiscipline of the field of zoology. A zoologist specializing in acarology is called an acarologist. Acarologists may also be parasitologists because many members of Acarina are parasitic. Many acarologists are studying around the world both professionally and as amateurs. [2] The discipline is a developing science and long-awaited research has been provided for it in more recent history. [2]

The leading scientific journals for acarology include: 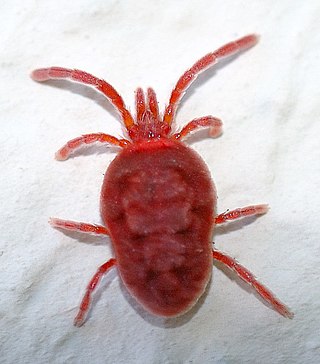 Mites are small arachnids. Mites span two large orders of arachnids, the Acariformes and the Parasitiformes, which were historically grouped together in the subclass Acari, but genetic analysis does not show clear evidence of a close relationship.

Varroa is a genus of parasitic mesostigmatan mites associated with honey bees, placed in its own family, Varroidae. The genus was named for Marcus Terentius Varro, a Roman scholar and beekeeper. The condition of a honeybee colony being infested with Varroa mites is called varroosis.

Zicman Feider (1903–1979) was a Jewish Romanian acarologist, a remarkable researcher and a gifted academic, whose work continues to influence by many generations of biologists, some of whom studied zoology under his supervision. His name as a researcher is forever associated with the enigmatic group of Acari a.k.a. Acarina, for which he arduously worked to perfect their taxonomy. Alone or in collaboration with his numerous disciples, he described and created 1 phalanx and 2 sub-phalanxes, 16 families and 8 subfamilies, 40 genera, 4 subgenera, and 145 species new to science. One could only compare professor Feider's work with that of Aristide Caradgea, who studied micro-Lepidoptera, attracting all the world researchers of that group to come in a pilgrimage to his modest place in Grumazesti, Neamț, Romania. Similarly, Feider's strenuous line of work encompassed Acari collections from all over Europe, St. Helen Island, North Korea, Nepal, Mongolia, India, Vietnam, Brazil, Venezuela, and Chile, making his lab in the Alexandru Ioan Cuza University, of Iași, Romania, a Mecca of the world's acarologists. 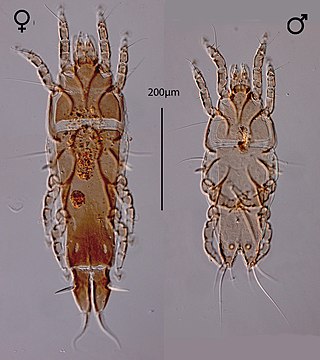 The Proctophyllodidae are a family of the Acarina (mite) order Astigmata. They contain many feather mites. The Alloptidae and Trouessartiidae were in earlier times included here as subfamilies.

Harry Hoogstraal was an American entomologist and parasitologist. He was described as "the greatest authority on ticks and tickborne diseases who ever lived." The American Society of Tropical Medicine and Hygiene's Harry Hoogstraal Medal for Outstanding Achievement in Medical Entomology honors his contributions to science. 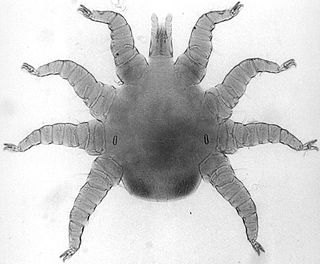 Rhinonyssidae is a family of mites in the order Mesostigmata. There are about 16 genera and at least 460 described species in Rhinonyssidae.

The Systematic & Applied Acarology Society is an international society dedicated to promoting the development of the scientific discipline of acarology and facilitating collaboration among acarologists around the world. Founded in 1996, the society publishes three serial publications: the Acarology Bulletin, a newsletter of the society; Systematic & Applied Acarology, a refereed research journal; and Systematic and Applied Acarology Special Publications, a rapid publication for short papers and monographic works which was merged with the journal in 2012. It also occasionally issues books of special interest to members, and maintains an online acarological e-reprint library for acarologists around the world.

Ana Esther Hoffmann Mendizábal, also known as Anita Hoffmann, was a Mexican researcher, educator, academic, and biologist specializing in acarology and parasitology. She was a pioneer in the study of arachnids and acari in Mexico. She founded the Instituto Politécnico Nacional's Laboratory of Acrology in 1965, the first in Latin America, and another at the Faculty of Sciences of the National Autonomous University of Mexico in 1977. 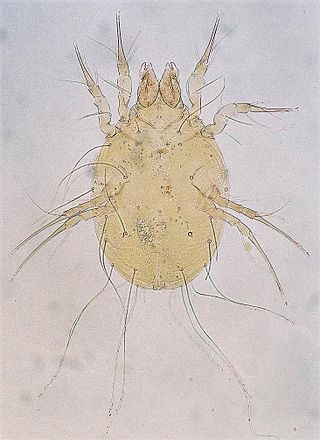 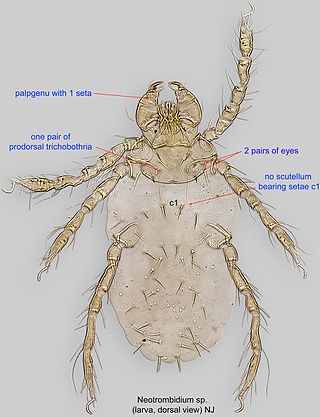 Neotrombidiidae is a family of velvet mites and chiggers in the order Trombidiformes. There are at least four genera in Neotrombidiidae.

Penthaleus major, known generally as the winter grain mite or blue oat mite, is a species of earth mite in the family Penthaleidae.

Dr. Brouria Feldman-Muhsam was a 20th-century Israeli medical entomologist and parasitologist known for her pioneering work with mites and ticks. After earning her Teaching Certificate at Levinsky College of Education in Tel-Aviv in 1935, Feldman-Muhsam enrolled in the University of Geneva in Switzerland and completed her Licence ès Sciences in biology there in 1937, qualifying her for doctoral studies. She returned to Mandate Palestine in 1937 and earned her Doctor of Philosophy degree in Medical Entomology at the Hebrew University of Jerusalem, graduating in 1942.

Magdalena Kathrina Petronella Smith Meyer was a South African acarologist who was regarded as a world authority on plant-feeding mites of agricultural importance and was known as the "mother of red-spider mites of the world". She described more than 700 new species and 25 new genera, mostly of mites of agricultural importance. Meyer was involved in the promotion of biological control of mites using predatory mites, spiders and insects. 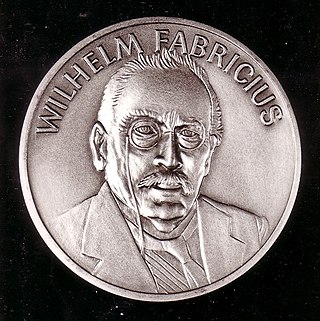 Wolfgang Siegfried Karg (1927–2016) was an East German entomologist who specialised in mites (Acari). 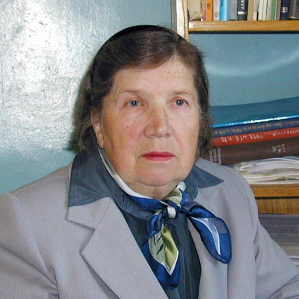 Natalia Aleksandrovna Filippova was a world authority on the taxonomy of mites and especially ticks. Her monographs on the identification, morphology, development, distribution and behaviour of the family Argasidae and the sub-families of Ixodinae and Amblyomminae are standard works on these important vectors of disease.

Mercedes Delfinado is an acarologist from the Philippines, who was a recipient of a 1962 Guggenheim Fellowship. She is a speciliast in bee mites, and published widely on insects of south-east Asia. For over twenty years she was a Chief Editor for the International Journal of Acarology. Multiple species were named in her honour.