Acciona, S.A. (Spanish pronunciation:  [akˈθjona] ) is a Spanish conglomerate group dedicated to the development and management of infrastructure (construction, water, industrial and services) and renewable energy.

The company was founded in 1997 through the merger of Entrecanales y Tavora and Cubiertas y MZOV. The company's headquarters is in Alcobendas, Community of Madrid, Spain. The company's U.S. operations are headquartered in Chicago, Illinois.

The Company employs 30,000 professionals, and it is to be found in 30 countries on five continents. The Company is IBEX 35-listed and an industry benchmark.

The group is organised as follows: [4]

Acciona obtained the distinctive RobecoSAM Silver Class 2015 in the Electric Utilities sector under the Sustainability Yearbook 2015 [5] for its best practices in sustainability. It has also been included in the CDP Climate Leadership Index 2014 Performance index, which lists the 187 world companies that have received the highest rating for its performance in the fight against climate change. [6]

As part of a Public Private Partnership with the New South Wales State Government, Acciona was responsible for delivering the infrastructure for the Sydney CBD and South East Light Rail project which was completed in April 2020. [15] Acciona is suing the government seeking $1.1 billion in additional funding, claiming the government minimized the amount of subterranean utility works that would be required. [16]

Bouygues S.A. is an industrial group headquartered in the 8th arrondissement of Paris, France. Bouygues is listed on Euronext Paris exchange and is a blue chip in the CAC 40 stock market index. The company was founded in 1952 by Francis Bouygues and since 1989 has been led by his son Martin Bouygues. 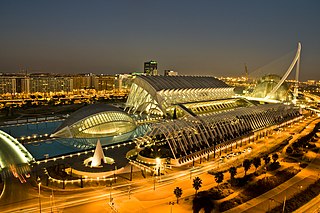 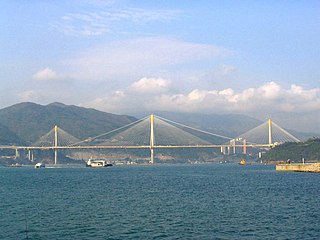 Ting Kau Bridge is a 1,177-metre (3,862 ft) long cable-stayed bridge in Hong Kong that spans from the northwest of Tsing Yi Island and Tuen Mun Road. It is near the Tsing Ma Bridge which also serves as a major connector between the Hong Kong International Airport on Lantau Island and the rest of Hong Kong. It was completed on May 5, 1998. The bridge is toll-free. 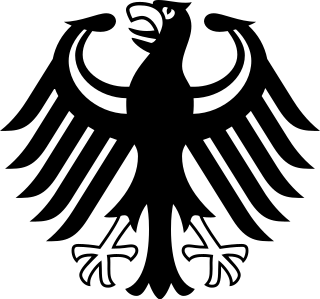 Vinci, corporately styled VINCI, is a French concessions and construction company founded in 1899 as Société Générale d'Enterprises. Its head office is in Rueil-Malmaison, in the western suburbs of Paris. Vinci is listed on Euronext's Paris stock exchange and is a member of the Euro Stoxx 50 index. 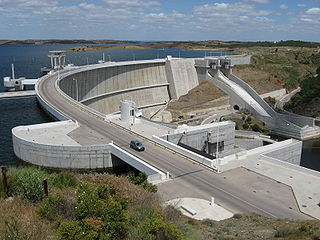 The Alqueva Dam is an arch dam and the centrepiece of the Alqueva Multipurpose Project. It impounds the River Guadiana, on the border of Beja and Évora Districts in south of Portugal. The dam takes its name from the town of Alqueva to its right bank. It creates a large reservoir with an inter-annual regulation capacity from which water may be distributed throughout the region. The dam was completed in 2002 and its reservoir reached the full level, for the first time, in 2010. The 518.4-megawatt (695,200 hp) power station was commissioned in two stages, stage I in 2004 and stage II in 2013. The Alqueva Dam constitutes one of the largest dams and artificial lakes in Western Europe.

Gare do Oriente, or alternately, the Lisbon Oriente Station is one of the main Portuguese intermodal transport hubs, and is situated in the civil parish of Parque das Nações, municipality of Lisbon.

Endesa, S.A. is the largest electric utility company in Spain. The firm, a majority-owned subsidiary of the Italian utility company Enel, has 10 million customers in Spain, with domestic annual generation of over 97,600 GWh from nuclear, fossil-fueled, hydroelectric, and renewable resource power plants. Internationally, it serves another 10 million customers and provides over 80,100 GWh annually. Total customers numbered 22.2 million as of December 31, 2004. It also markets energy in Europe. The company has additional interests in Spanish natural gas and telecommunications companies.

Ferrovial, S.A., previously Grupo Ferrovial, is a Spanish multinational company involved in the design, construction, financing, operation (DBFO) and maintenance of transport infrastructure and urban services. It is a publicly traded company and is part of the IBEX 35 capitalization-weighted stock market index. The company is headquartered in Madrid. Ferrovial operates through four divisions in over 5 countries. Its Highway division finances and operates toll roads including 407 ETR, North Tarrant Express, LBJ Express, Euroscut Azores and Ausol I. The Airport sector has developed and produced airports in Heathrow, Glasgow, Aberdeen and Southampton. Its Construction business designs and constructs public and private works such as roads, highways, airports and buildings. The company's Services sector oversees the maintenance and conservation of infrastructure, facilities and buildings, the collection and treatment of waste, and other types of public services. 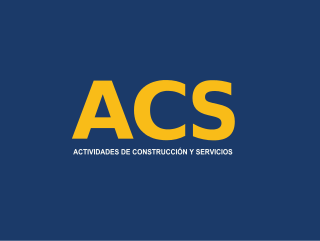 ACS, Actividades de Construcción y Servicios, S.A. is a Spanish company dedicated to civil and engineering construction, all types services and telecommunications. It is one of the leading construction companies in the world, with projects in many countries around the world. The company was founded in 1997 through the merger of OCP Construcciones, S.A. and Ginés Navarro Construcciones, S.A.. The group has a global presence, including countries like Germany, India, Brazil, Chile, Morocco and Australia. The headquarters are in Madrid and the chairman is Florentino Pérez. Listed on the Bolsa de Madrid, the company's shares form part of the IBEX 35 stock market index.

Spie Batignolles is a French construction company based in Neuilly-sur-Seine. The company provides building and infrastructure construction in France, Germany, the United Kingdom, Spain, Portugal and Switzerland.

Fomento de Construcciones y Contratas, S.A., or FCC, is a leading Spanish construction company based in Barcelona. It is publicly traded and is part of the IBEX 35. Until November 2014 over 50% of the shares were owned by a company controlled by the daughter of its founder, Esther Koplowitz and others, when George Soros bought around 25 percent of her rights to acquire shares.

Strasbourg-Ville is the main railway station in the city of Strasbourg, Bas-Rhin, France. It is the eastern terminus of the Paris-Est–Strasbourg-Ville railway. The current core building, an example of historicist architecture of the Wilhelminian period, replaced a previous station inaugurated in 1852, later turned into a covered market and ultimately demolished.
With over 20 million passengers in 2018, Strasbourg-Ville is one of the busiest railway stations in France, second only to Lyon-Part-Dieu outside of the Île-de-France.

Philipp Holzmann AG was a German construction company based in Frankfurt am Main.

Montsecosuchus is an extinct genus of atoposaurid crocodylomorphs. It is the replacement generic name for Alligatorium depereti, which was described in 1915 from the Montsec Lithographic Limestone quarry of Spain. Fossils found from this locality are from the Early Cretaceous, being Upper Berriasian-Lower Valanginian in age, belonging to the La Pedrera de Rúbies Formation While many publications concerning atoposaurids after 1915 have included mentions of A. depereti, none has offered a redescription or revision of the species, though some recognized that great differences existed between it and other members of the genus. In these publications, the skull of A. depereti was shorter in relation to body length than any other species of Alligatorium, and this may have been evidence for the genetic distinction of the species, although no replacement name was proposed. However, better preparation of the holotype specimen MGB 512, a nearly complete articulated skeleton embedded in a limestone matrix now housed in the Museu de Ciències Naturals de Barcelona, allowed for a revision of the species in 1990 in which the name Montsecosuchus was first used.

Francisco García Paramés is a Spanish Fund manager. In 1989 he incorporated Bestinver Asset Management, from Acciona.

The Federal Chancellery in Berlin is the official seat and residence of the Chancellor of Germany as well as their executive office, the German Chancellery. As part of the move of the German Federal Government from Bonn to Berlin, the office moved into the new building planned by the architects Axel Schultes and Charlotte Frank. The building, which is the largest government headquarter in the world, is part of the ″Federal Belt″ called assembly in the Spreebogen, Willy-Brandt-Straße 1, 10557 Berlin. 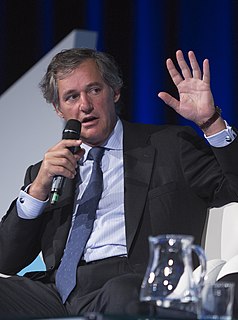 José Manuel Entrecanales Domecq is a Spanish businessman and former banker. In 2004, he succeeded his late father as chairman of Acciona. In 2019, Forbes ranked him the 85th richest person in Spain, estimating his personal wealth at US$362 million, although his family fortune is estimated at around US$3.6 billion.