Acrobatics (from Ancient Greek ἀκροβατέω, akrobateo, "walk on tiptoe, strut" [1] ) is the performance of human feats of balance, agility, and motor coordination. Acrobatic skills are used in performing arts, sporting events, and martial arts. Extensive use of acrobatic skills are most often performed in acro dance, circus, and gymnastics, and to a lesser extent in other athletic activities including ballet, slacklining and diving. Although acrobatics is most commonly associated with human body performance, the term is used to describe other types of performance, such as aerobatics.

Acrobatic traditions are found in many cultures, and there is evidence that the earliest such traditions occurred thousands of years ago. For example, Minoan art from c. 2000 BC contains depictions of acrobatic feats on the backs of bulls. Ancient Greeks practiced acrobatics, [2] and the noble court displays of the European Middle Ages would often include acrobatic performances that included juggling [ citation needed ].

Though the term initially applied to tightrope walking,[ citation needed ] in the 19th century, a form of performance art including circus acts began to use the term as well. In the late 19th century, tumbling and other acrobatic and gymnastic activities became competitive sport in Europe.

Acrobatics has often served as a subject for fine art. Examples of this are paintings such as Acrobats at the Cirque Fernando (Francisca and Angelina Wartenberg) by Impressionist Pierre-Auguste Renoir, which depicts two German acrobatic sisters, Pablo Picasso's 1905 Acrobat and Young Harlequin , and Acrobats in a Paris suburb by Viktor Vasnetsov.

Acrobalance is a floor based acrobatic art that involves balances, lifts and creating shapes performed in pairs or groups.

Acro dance is a style of dance that combines classical dance technique with precision acrobatic elements.

Aerial is acrobatics performed in the air on a suspended apparatus. [5]

A trapeze is a short horizontal bar hung by ropes or metal straps from a support. Trapeze acts may be static, spinning (rigged from a single point), swinging or flying, and may be performed solo, double, triple or as a group act. [6]

Corde lisse is a skill or act that involves acrobatics on a vertically hanging rope. The name is French for "smooth rope".

Cradle (also known as aerial cradle or casting cradle) is a type of aerial circus skill in which a performer hangs by their knees from a large rectangular frame and swings, tosses, and catches another performer

Aerial silks is a type of aerial skill in which one or more artists perform aerial acrobatics while hanging from a long length of fabric suspended from a frame or ceiling.

Aerial hoop (also known as the lyra, aerial ring or cerceau/cerceaux') is a circular steel apparatus (resembling a hula hoop) suspended from the ceiling or a frame, on which artists may perform aerial acrobatics. It can be used static, spinning, or swinging.

Tightrope walking, also called funambulism, is the skill of walking along a thin wire or rope. Its earliest performance has been traced to Ancient Greece. [7] It is commonly associated with the circus. Other skills similar to tightrope walking include slack rope walking and slacklining.

Tumbling is an acrobatic skill involving rolls, twists, somersaults and other rotational activities using the whole body. Its origin can be traced to ancient China, Ancient Greece and ancient Egypt. [8] Tumbling continued in medieval times and then in circuses and theatre before becoming a competitive sport. 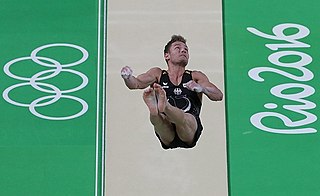 Contortion is a performance art in which performers called contortionists showcase their skills of extreme physical flexibility. Contortion acts often accompany acrobatics, circus acts, street performers and other live performing arts. Contortion acts are typically performed in front of a live audience. An act will showcase one or more artists performing a choreographed set of moves or poses, often to music, which require extreme flexibility. The physical flexibility required to perform such acts greatly exceeds that of the general population. It is the dramatic feats of seemingly inhuman flexibility that captivate audiences. 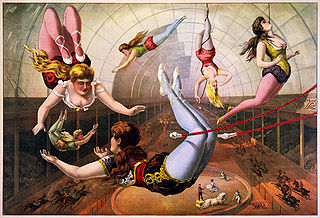 A trapeze is a short horizontal bar hung by ropes or metal straps from a support. It is an aerial apparatus commonly found in circus performances. Trapeze acts may be static, spinning, swinging or flying, and may be performed solo, double, triple or as a group act.

Chinese variety art refers to a wide range of acrobatic acts, balancing acts and other demonstrations of physical skill traditionally performed by a troupe in China. Many of these acts have a long history in China and are still performed today.

Quidam was the ninth stage show produced by Cirque du Soleil. It premiered in April 1996 and has been watched by millions of spectators around the world. Quidam originated as a big-top show in Montreal and was converted into an arena format beginning with its 2010 tour in North America. It then changed back to the Big Top for a 3-month run in Seoul, South Korea before returning to an arena show for its tour to Oceania. The show performed for the final time in Christchurch, New Zealand on February 26, 2016.

Saltimbanco was a touring show by Cirque du Soleil. Saltimbanco ran from 1992 to 2006 in its original form, performed under a large circus tent called the Grand Chapiteau; its last performance in that form was in Rio de Janeiro, Brazil, on December 10, 2006. A new adaptation of the show started touring North America on July 31, 2007, with its first stop in London, Ontario, Canada. The new version was staged in arenas with fewer performances in each city it visited. The new version closed at the end of 2012. 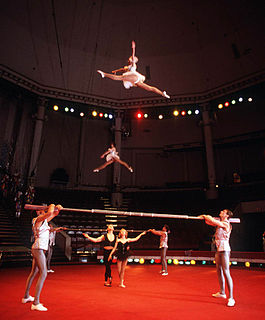 The Russian bar is a circus act which combines the gymnastic skills of the balance beam, the rebound tempo skills of trampoline, and the swing handstand skills of the uneven bars and the parallel bars. The bar itself is a flexible vaulting pole around 4 to 4.5 metres long, typically made of fiberglass; three vaulting poles may also be fastened together to create a flexible beam. The act involves two bases balancing the bar on their shoulders, and one flyer standing on the bar, with the flyer bouncing and performing aerial tricks and landing on the bar. 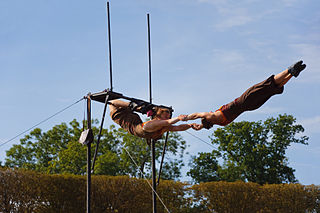 The cradle is a type of aerial circus act in which a performer hangs by his or her knees from a large rectangular frame and swings, tosses, and catches another performer. The aerialist being swung is referred to as a flyer, while the one doing the tossing and catching is referred to as a catcher or caster. The flyer usually starts and ends standing on the frame above the catcher. The flyer swings holding on to the catcher's hands, performs releases at the top of the swing, and is re-caught in mid-air.

The aerial hoop is a circular steel apparatus suspended from the ceiling, on which circus artists may perform aerial acrobatics. It can be used static, spinning, or swinging. Tricks that can be performed include the Candlestick, Bird's Nest and Crescent Moon

Tuuli Pauliina Räsänen is a circus performer and actress from Finland. Her career jump-started when she was invited to perform as the first Fennoscandian soloist with Cirque du Soleil. She was awarded a five-year grant from Finland's Central Commission of Arts to pursuit artistic work. She has succeeded in establishing her career in the international market and at the moment performs with Komische Oper Berlin. 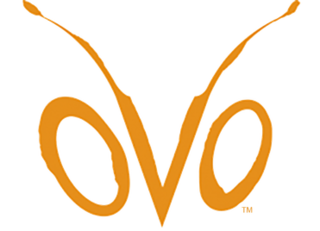 Ovo is a touring circus production by Cirque du Soleil that premiered in Montréal, Canada, in 2009. Ovo's creator and director, Deborah Colker, took inspiration from the world of insects. The idea for Ovo was not to be about the acts, nor dancing, nor insects, but about movement. The movement of life permeates the entire show with creatures flying, leaping, bounding, and crawling. Composer Berna Ceppas brought additional life to Ovo with a score inspired by the music of Brazil. Ovo means "egg" in Portuguese and represents the underlying thread through the show. Graphically, inside the logo of Ovo, is an insect. The two O's represent the eyes and the V forms the nose and antennas. 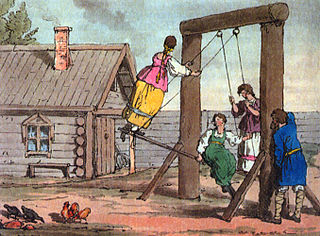 A Russian swing is a large, floor-mounted swing which is sometimes used in circus performances to make impressive high acrobatic jumps. 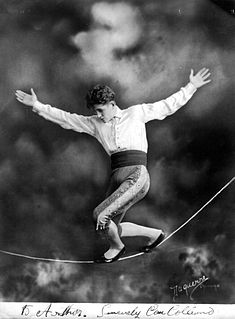 Slackwire is an acrobatic circus act that involves the balancing skills of moving along a flexible, thin wire suspended in the air, connected to two anchor points. Slackwire is not to be confused with slacklining. 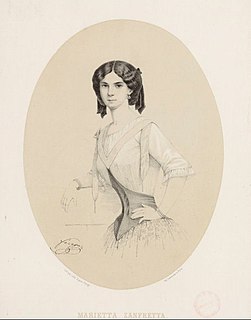 Marietta Zanfretta was an Italian tightrope dancer who found success in the United States. One of the greatest female tight-rope dancers in the world, she was known for performing en pointe on the tightrope, a rare feat.