The Action of 14 February 1795 was a minor naval engagement of the French Revolutionary Wars fought in the Gulf of Roses between a ship of the line of Juan de Lángara’s fleet and a French squadron of a frigate and a corvette. For orders of Lángara, the Spanish Ship of the Line Reina María Luisa of 112 guns, chased the French frigate, named Iphigenie , more than one day, forcing finally her to strike her colors. The corvette, which separated three days before in a storm, was supposed to be lost. [2] 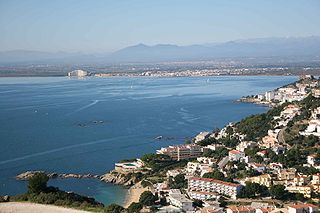 The Gulf of Roses is the most northeastern bay on the Catalan coast of Spain. 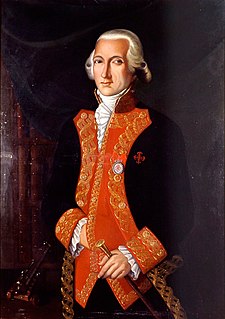 Several days later, on 30 March, when the Montañés of 74 guns was carrying the prize, she was attacked by a strong French squadron of eight ships of the line and two frigates which initially waved the Spanish flag. [3] Thanks to her superior speed, she was able to reach the port of Sant Feliu de Guíxols, and after a hard fight in which she fired 1,100 cannonballs, [4] the attacking forces were rejected with the only loss aboard the Montañés of three men killed and few wounded. [4] The French withdrew to Menorca.

The Montañés was a 74 gun third-rate Spanish ship of the line. The name ship of her class, she was built in the Ferrol shipyards and paid for by the people of Cantabria. She was built following José Romero y Fernández de Landa's system as part of the San Ildefonso class, though her were amended by Retamosa to refine her buoyancy. She was launched in May 1794 and entered service the following year. With 2400 copper plates on her hull, she was much faster than other ships of the same era, reaching 14 knots downwind and 10 knots upwind.

Sant Feliu de Guíxols is a municipality in the comarca of the Baix Empordà in Catalonia, Spain. It is situated on the Costa Brava and is an important port and tourist centre. The district abuts to the north, the upmarket s'Agaró resort built round the Sant Pol Beach. In addition to tourism and the port the cork industry is a traditionally local industry. The town contains a large monastery which now houses the town museum and is a protected historico-artistic monument. The C-253 road runs north along the coast to Platja d'Aro and Palamós, while the C-65 road runs inland from the town. The GI-682 provides a dramatic cliff top drive to Tossa de Mar to the south.

Menorca or Minorca is one of the Balearic Islands located in the Mediterranean Sea belonging to Spain. Its name derives from its size, contrasting it with nearby Majorca. 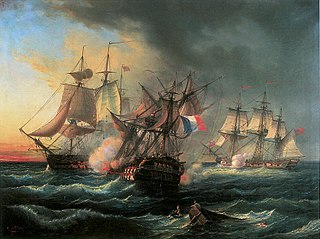 HMS Indefatigable was one of the Ardent class 64-gun third-rate ships-of-the-line designed by Sir Thomas Slade in 1761 for the Royal Navy. She was built as a ship-of-the-line, but most of her active service took place after her conversion to a 44-gun razee frigate. She had a long career under several distinguished commanders, serving throughout the French Revolutionary Wars and the Napoleonic Wars. She took some 27 prizes, alone or in company, and the Admiralty authorised the issue of four clasps to the Naval General Service Medal in 1847 to any surviving members of her crews from the respective actions. She was broken up in 1816.

Belle Poule was a French frigate of the Dédaigneuse class, which Léon-Michel Guignace built. She is most famous for her duel with the British frigate HMS Arethusa on 17 June 1778, which began the French involvement in the American War of Independence. 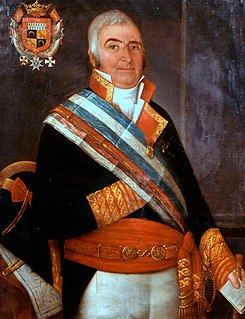 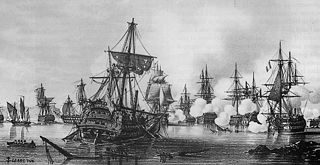 HMS Hannibal was a 74-gun third-rate ship of the line of the Royal Navy, launched on 15 April 1786, named after the Carthaginian general Hannibal Barca. She is best known for having taken part in the Algeciras Campaign, and for having run aground during the First Battle of Algeciras on 5 July 1801, which resulted in her capture. She then served in the French Navy until she was broken up in 1824. 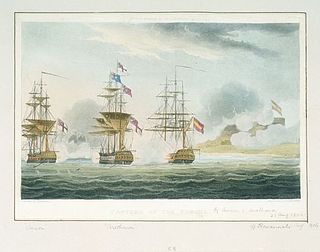 Minerve was a 40-gun Minerve-class frigate of the French Navy. The British captured her twice and the French recaptured her once. She therefore served under four names before being broken up in 1814: 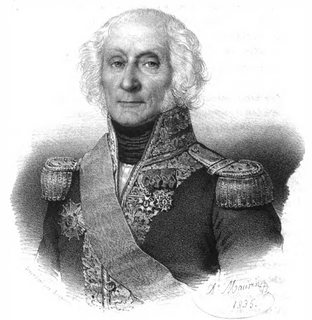 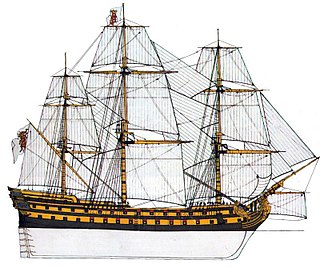 Fénix was an 80-gun ship-of-the-line of the Spanish Navy, launched in 1749. In 1759, she was sent to bring the new king, Carlos III, from Naples to Barcelona. When Spain entered the American Revolutionary War in June 1779, Fénix set sail for the English Channel where she was to join a Franco-Spanish fleet of more than 60 ships-of-the-line under Lieutenant General Luis de Córdova y Córdova. The Armada of 1779 was an invasion force of 40,000 troops with orders to capture the British naval base at Portsmouth. 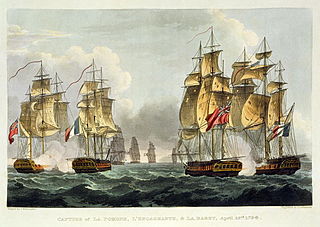 The Action of 19 December 1796 was a minor naval engagement of the French Revolutionary Wars, fought in the last stages of the Mediterranean campaign between two British Royal Navy frigates and two Spanish Navy frigates off the coast of Murcia. The British squadron was the last remaining British naval force in the Mediterranean, sent to transport the British garrison of Elba to safety under the command of Commodore Horatio Nelson. The Spanish under Commodore Don Jacobo Stuart were the vanguard of a much larger squadron. One Spanish frigate was captured and another damaged before Spanish reinforcements drove the British off and recaptured the lost ship.

Neptuno was an 80-gun Montañes-class ship of the line of the Spanish Navy. She was built in 1795 and took part in the French Revolutionary and Napoleonic Wars. She fought with the Franco-Spanish fleet in the battle of Trafalgar, and was wrecked in its aftermath.

The Action of 13 October 1796 was a minor naval engagement of the French Revolutionary Wars, fought off the Mediterranean coast of Spain near Cartagena between the British Royal Navy 32-gun frigate HMS Terpsichore under Captain Richard Bowen and the Spanish Navy 34-gun frigate Mahonesa under Captain Tomás de Ayalde. The action was the first battle of the Anglo-Spanish War, coming just eight days after the Spanish declaration of war. In a battle lasting an hour and forty minutes, Mahonesa was captured.

Robert Mann was an officer of the Royal Navy. He served during the American War of Independence and the French Revolutionary Wars, eventually rising to the rank of admiral of the red.

HMSEmerald was a 36-gun Amazon-class frigate that Sir William Rule designed in 1794 for the Royal Navy. The Admiralty ordered her construction towards the end of May 1794 and work began the following month at Northfleet dockyard. She was completed on 12 October 1795 and joined Admiral John Jervis's fleet in the Mediterranean. 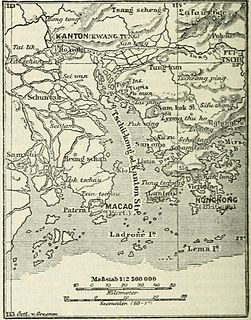 The Macau Incident was an inconclusive encounter between a powerful squadron of French and Spanish warships and a British Royal Navy escort squadron in the Wanshan Archipelago off Macau on 27 January 1799. The incident took place in the context of the East Indies campaign of the French Revolutionary Wars, the allied squadron attempting to disrupt a valuable British merchant convoy due to sail from Qing Dynasty China. This was the second such attempt in three years; at the Bali Strait Incident of 1797 a French frigate squadron had declined to engage six East Indiamen on their way to China. By early 1799 the French squadron had dispersed, with two remaining ships deployed to the Spanish Philippines. There the frigates had united with the Spanish Manila squadron and sailed to attack the British China convoy gathering at Macau. 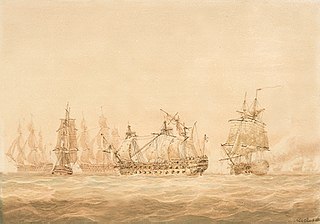 The Battle of the Levant Convoy was a naval engagement of the French Revolutionary Wars fought on 7 October 1795. During the battle, a powerful French squadron surprised a valuable British convoy from the Levant off Cape St Vincent on the coast of Portugal. The convoy was weakly defended, and although the small escort squadron tried to drive the French back, they were outmatched. In the ensuing action one of the British ships of the line and almost the entire convoy was overrun and captured. The French commander, Commodore Joseph de Richery, then retired to the neutral Spanish port of Cádiz, where he came under blockade.

Richery's expedition was a French naval operation during 1795 and 1796 as part of the French Revolutionary Wars. The operation was led by Commodore Joseph de Richery and comprised two separate cruises; the first was an operation off Cádiz in Southern Spain in which Richery attacked and defeated a large British merchant convoy with a weak escort, taking many prizes. Forced to anchor at Cádiz, the French squadron was subsequently blockaded in the port for almost a year. Richery was enabled to escape in August 1796 by a Spanish fleet, and went on to attack British fisheries off Newfoundland and Labrador before returning to France having inflicted severe damage to British Atlantic trade.