The action of 24 February 1780 was a minor naval battle that took place off the island of Madeira during the American Revolutionary war. [1] A French convoy was intercepted and pursued by a British Royal Navy squadron ending with the French 64-gun ship Protée being captured along with three transports. [2]

In early 1780, the Royal Navy under Admiral George Rodney had defeated a Spanish fleet and subsequently relieved Gibraltar under siege by Spanish and French forces. Rodney then sailed for the West Indies in February, detaching part of the fleet for service in the English Channel. [3]

On 16 February 1780, a French convoy with troops and ammunition bound for India departed Lorient escorted by the 64-gun ship of the line Protée with Ajax, Éléphant and Charmante. [2] Protée, under Captain Du Chilleau de La Roche, was the flagship of the convoy. [4]

On 23 February, off the island of Madeira, the convoy met Rodney's fleet; Duchilleau ordered Ajax to double back with most of the convoy, while he would lure the British by continuing on the same bearing with Charmante and the smallest ships of the convoy. The British fleet chased Protée while Ajax escaped with the convoy; seeing the ships under his protection out of harm's way around 1am, Duchilleau tried to effect his own escape, but Protée caught the wind, breaking her tops and mizzen, allowing HMS Resolution, under Lord Robert Manners, to catch on around 2am, soon joined by the 74-gun HMS Bedford and HMS Marlborough. [1]

Hopelessly outnumbered and out-gunned, Protée struck while Charmante returned to Lorient, arriving there on 3 March. [5] Three merchantmen were also captured.

Court-martialled for the loss of his ship, Du Chilleau was honourably acquitted. [4]

For the British the booty was substantial, as well as the three transports, Protée was carrying £60,000 worth of silver with the prize money subsequently shared.

Protée was commissioned in the Royal Navy as the third rate HMS Prothee.

Protée was an Artésien-class 64-gun ship of the line of the French Navy, launched in 1772.

The Battle of Les Sables-d'Olonne was a minor naval battle fought on 23 February 1809 off the town of Les Sables-d'Olonne on the Biscay Coast of France between a French Navy squadron of three frigates and a larger British squadron of ships of the line. The French squadron had sailed from the port of Lorient on 23 February in an effort to link up with a fleet from Brest under Jean-Baptiste Willaumez, but missed the rendezvous and was pursued by a British blockade squadron under Rear-Admiral Robert Stopford. The French commander, Commodore Pierre Roch Jurien, anchored his squadron under the batteries which protected the town of Les Sables-d'Olonne in the hope of dissuading an attack.

The action of 8 January 1780 was a naval encounter off Cape Finisterre between a British Royal Naval fleet under Admiral Sir George Rodney, and a fleet of Spanish merchants sailing in convoy with seven warships of the Caracas Company, under the command of Commodore Don Juan Augustin de Yardi. During the action the entire Spanish convoy was captured. Rodney's fleet was en route to relieve Gibraltar, and this action took place several days before Rodney's engagement and defeat of a Spanish fleet at the Battle of Cape St. Vincent.

HMS Montreal was a 32-gun Niger-class fifth-rate frigate of the Royal Navy. She was launched in 1761 and served in the Seven Years' War and the American War of Independence. The French captured her in 1779 and she then served with them under the name Montréal. An Anglo-Spanish force destroyed her during the occupation of Toulon early in the French Revolutionary Wars.

Etna was a French naval Etna-class ship-sloop launched in 1795 that the Royal Navy captured in November 1796. She was taken into service as HMS Aetna and renamed to HMS Cormorant the next year. She captured several merchant vessels and privateers before she was wrecked in 1800 off the coast of Egypt. 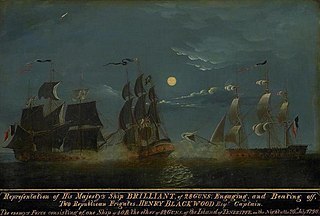 Vertu was a 40-gun French frigate designed by engineer Segondat. She served in Sercey's squadron in the Indian Ocean, and in Saint-Domingue. She was captured by the Royal Navy at the end of the Blockade of Saint-Domingue when the island surrendered to the British. After her capture the Navy sailed her to Britain but never commissioned her, and finally sold her in 1810. 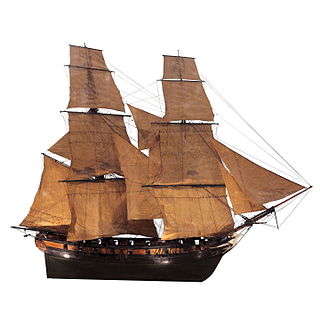 The French brig Néarque was an Abeille-class brig launched at Lorient in 1804. She made a voyage to the Caribbean in 1805. After the frigate HMS Niobe captured her in March 1806, the Royal Navy took her into Plymouth, but apparently laid her up in ordinary. She then disappears from the records until her sale in 1814.

The action of 13 August 1780 was a minor naval battle fought off the Old Head of Kinsale in which the 64-gun French "private man of war" (privateer) Comte d'Artois fought two British Royal Navy ships, Bienfaisant and Charon, during the American Revolutionary War.

Réolaise was a 20-gun ship-corvette of the French Navy. Originally a British merchantman, she was built in England, and captured by the French and taken into naval service in 1793. She served as a convoy escort until she ran aground in combat in 1800 at Port Navalo; her crew scuttled her by fire.

Charmante was a 32-gun of the French Navy, lead ship of her class.

René Joseph Bouvet de Précourt was a French Navy officer. He was captain of the 64-gun Ajax in Suffren's squadron in the Indian Ocean during the War of American Independence, and fought at the Battle of Sadras on 17 February 1782.

Charles de Mengaud de La Haye was a French Navy officer. He served in the War of American Independence.