Adıyaman Province (Turkish : Adıyaman ili, Kurdish : Parêzgeha Semsûrê‎ [2] ) is a province in the Southeastern Anatolia Region of Turkey. The capital is Adıyaman. The province is considered part of Turkish Kurdistan and has a Kurdish majority. [3]

Adıyaman Province was part of the province of Malatya until 1954, when it was made into a province as a reward for voting for the winning Democratic Party in the 1954 general election. [4] The province consists of the districts Adıyaman (center district), Besni, Çelikhan, Gerger, Gölbaşı, Kâhta, Samsat, Sincik and Tut.

Armenian existence in Adıyaman dates back to the 4th century, where they were known as 'fire worshippers'. Armenians lived in the area when Arab Muslims captured the area in 639. The Arabs considered the city as part of Armenia and experienced immigration from Byzantine Armenia due to Byzantine oppression in 713. The city came under Seljuk rule after the Battle of Manzikert in 1071 and the local Armenians established principalities in the area. One of these principalities was founded by Philaretos Brachamios who tried to protect the land between the Seljuk and the Byzantine. The Armenians had good relations with the European Crusader states, but the Crusader County of Edessa would advance against the Armenians in Adıyaman. Political leaders in Adıyaman were also victims of assassinations by Edessa. Wife of Kogh Vasil founded an army to protect the area from Edessa as well, but Edessa ultimately captured the area. Close relations between the Armenians and the Crusader states, however, continued until Nur ad-Din captured the area in 1150. The area came under the rule of Timurtash of the Artuqids for his support for Nur ad-Din and later the Seljuks from the beginning of the 13th century. The locals failed at removing the rulership of Kilij Arslan II during the late 12th century. In the subsequent period, the area was fought over between the Mamluk Sultanate and the Armenian Kingdom of Cilicia, changing hands between the two. [5]

Ottoman Sultan Selim I captured the area during the Ottoman–Mamluk War in 1516-1517. In the first defter of the area in 1519, it was mentioned that the Kurdish Reşwan tribe populated the area. Documents from 1524 and 1536 also contain records of the Reshwan tribe being present. The tribe was engaged in agriculture after having had a nomadic lifestyle. [6]

Evliya Çelebi visited the city in the 17th century and described the agricultural life. [7]

At the beginning of the 19th century, most Armenians lived near the castle of Adıyaman city and mostly made their living through shop keeping and trading. In the villages, they were involved in agriculture and animal husbandry. The local Armenians welcomed American missionaries approaching them during the 19th century at first, but prevented them from converted them later on. Some of the Gregorian Armenians did however convert to Protestantism and the missionaries ultimately divided the local Armenian community. Ainsworth visited the town of Adıyaman in the 1842 and mentioned that the town contained 800 Muslim households and 300 Armenian households and that it had several mosques but no churches. After his visit to the town, he visited the Kurdish village of Kerkunah in the outskirts and afterwards Kâhta, where he mentioned that a Kurdish rebellion was taking place. [8] Most of the rural areas spoke Kurdish in 1882, while Turkish was prevalent in Adıyaman town. [9]

Armenian nationalism increased among the Armenians by the end of the century and most of the Armenian population fell victim to the Armenian genocide in 1915. There are, however, still some Armenians around Kâhta. [5]

The area was part of Mamuret-ul-Aziz Vilayet as Behisni, Hasanmansur and Kahta districts. These three districts had a total population of 99,439 in 1914 of which 93.4% was Muslim and 6.6% Christian. [10]

The majority of the population is Hanafi Kurdish, [3] [24] with a significant Kurdish Alevi population. [25] One estimate from 2014 places the Alevi population at 11%. [26] The province is generally more pious than other Kurdish areas in Turkey [27] and has been a hotspot for radicalization and Islamism in recent years (see Dokumacılar). [28] Historian Şahidin Şimşek argued that Hanafi adherents in the province had been manipulated by the state to believe that Kurdish nationalism equated to Alevism. Another theory points at the poverty in the province. [29]

The western districts of Besni, Gölbaşı and Tut are populated by both Kurds and Turkmens. [33]

Bingöl is a city in Eastern Turkey. It is surrounded by mountains and numerous glacier lakes, hence the name. Lately, the town has become a popular tourist destination. According to 2017 estimates, it has a population of over 111,000.

Tunceli is a majority Kurdish city in Turkey. It is the capital of Tunceli Province, located in the middle of Eastern Anatolia Region. The city was the site of the infamous Dersim massacre.

The Zazas are a people in eastern Turkey who speak the Zaza language. Their heartland consists of Tunceli and Bingöl provinces and parts of Elazığ, Erzincan and Diyarbakır provinces. Zazas generally consider themselves Kurds, and are often described as Zaza Kurds. 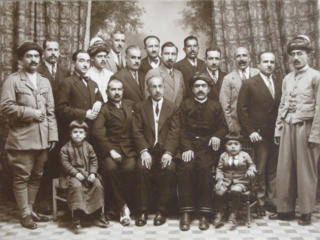 Xoybûn or Khoyboun was a nationalist organisation of Kurds that is known for leading the Ararat rebellion, commanded by Ihsan Nuri. Many Armenians joined the movement as well. 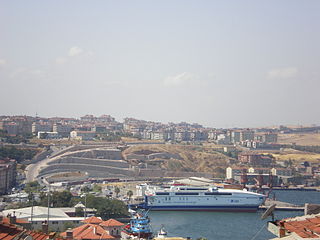 Bandırma is a city in northwestern Turkey with 158,857 inhabitants as of 2020 on the Sea of Marmara. Bandırma is a district of Balıkesir Province. Bandırma is located in the south of the Marmara Sea, in the bay with the same name, and is an important port city. It is approximately two hours away from Istanbul, Izmir and Bursa.

Kâhta is a city and district in Adıyaman Province of Turkey. The city is populated by Kurds from the Reşwan tribe.

Crimean Tatars in Turkey refers to citizens and denizens of Turkey who are, or descend from, the Tatars of Crimea.

İzmit is a district and the capital of Kocaeli province, Turkey. It is located at the Gulf of İzmit in the Sea of Marmara, about 100 km (62 mi) east of Istanbul, on the northwestern part of Anatolia. The city center has a population of 300,611. The population of the province is 1,459,772. Unlike other provinces in Turkey, apart from Istanbul, the whole province is included within the municipality of the metropolitan center.

The Abkhazians in Turkey refers to citizens and denizens of Turkey who are, or descend from, ethnic Abkhazians who originate from Abkhazia.

The Pomaks in Turkey refers to an ethnic group, who are predominantly Muslim and speak their own dialect of Bulgarian. They mostly live in Eastern Thrace, though some are also present in Anatolia.

Bağlar is one of Diyarbakır's central districts in Turkey. In the local elections of March 2019, Zeyyat Ceylan was elected as a Mayor with 70,34% of the votes. But on 11 April the Supreme Election Board decided not to deliver him the right to serve as Mayor due to having been dismissed from public office before. The Mayorship was instead delivered to Hüseyin Beyoğlu from the Justice and Development Party (AKP) who polled second with 25,46%.

Çaykent is a village in the Çayırlı district of the Erzincan Province, located in the Eastern Anatolia Region of Turkey. It lies on the right bank of the Karasu river, which is one of the two sources of Euphrates.