Adelaïde Henriette "Ada" den Haan (born 14 May 1941) is a retired Dutch breaststroke swimmer. She dominated the 200m breaststroke event in the 1950s, setting four world records in 1956-1957, one under the old rules and three under the new rules that disallowed long underwater swimming. However, she could not participate in the 1956 Summer Olympics that were boycotted by the Netherlands in protest of the suppression of the Hungarian Revolution by the Soviet Union. She won two European gold medals in 1958, but by 1959 her world record was broken and her dominance faded away. At the 1960 Summer Olympics she was part of the Dutch medley team that broke the Olympic record in the preliminaries; however, they finished fourth in the final. She was also fourth in the individual 200 m breastroke event. She married Martien Swinkels, the coach of the Dutch swimming star Marcel Wouda. [2]

Kristine Lora Quance, also known by her married name Kristine Julian, is an American former competition swimmer who specialized in breaststroke and medley events. Quance competed at the international level in the 1990s, and swam at the 1996 Summer Olympics in Atlanta, Georgia, winning a gold medal in the 4×100-meter medley relay. She is a 10-time United States national champion; and twice won the Kiphuth Award for highest individual point scorer at an individual national championship.

Silke Hörner is a German former breaststroke swimmer, a leading member of the 1980s East German swimming team. She won two Olympic gold medals, in the 200 m breaststroke and 4×100 m medley relay at the 1988 Summer Olympics in Seoul, and set four individual world records. She was named by Swimming World Magazine as European Swimmer of the Year in 1985 and 1987, but her achievements are regarded with suspicion due to the state-run systematic doping program run by East Germany. In 1991, former East German swimming coach Michael Regner claimed that in the 1980s he had been instructed to distribute anabolic steroids to team swimmers, including Hörner.

Klena ("Klenie") Geertje Bimolt is a former breaststroke swimmer from the Netherlands, who won the silver medal in the 4 × 100 medley relay at the 1964 Summer Olympics. She did so together with her team mates Corrie Winkel, Ada Kok and Erica Terpstra. The same year, she helped the Dutch team to set the world record in the same event. Bimolt also competed at the 1968 Summer Olympics in the 4 × 100 medley relay, but finished seventh. She won two silver medals at the 1962 European Aquatics Championships 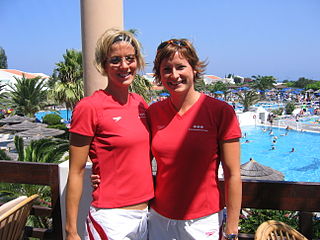 Willemijntje den Ouden was a competitive swimmer from the Netherlands, who held the 100-meter freestyle world record for nearly 23 years, from 1933 to 1956.

Petronella "Nel" van Vliet was a breaststroke swimmer from the Netherlands. She won gold medals in the 200 m breaststroke at the 1947 European Aquatics Championships and 1948 Summer Olympics. In 1973, she was inducted to the International Swimming Hall of Fame.

Galina Nikolayevna Prozumenshchikova was a Soviet breaststroke swimmer who also competed in medley relays. She won five Olympic medals in 1964, 1968 and 1972 and five European Championships medals in 1966 and 1970. Her first Olympic medal, the gold in 200 m breaststroke in 1964, was the first Olympic gold in swimming for the Soviet Union. From 1964 to 1966, she set five world records: four in 200 m and one in 100 m breaststroke events. Between 1963 and 1972, she won 15 national titles and set 27 national records.

Nađa Higl is a Serbian swimmer. She was World Champion in 200 m breaststroke.

Margretta "Gretta" Kok is a retired Dutch breaststroke swimmer who participated in the 1960 and 1964 Summer Olympics. In 1960, she was fifths in the 200m breaststroke event, whereas in 1964 she did not reach the final. In 1966, she won a gold medal in the 4 × 100 m medley relay at the European Aquatics Championships. Her younger sister, Ada Kok, was also an Olympic swimmer and part of the same team that won the medley gold in 1966.

Helena Elisabeth "Lenie" de Nijs is a retired Dutch swimmer. In July-August 1955 she broke three freestyle world records over 1500 m, 880 yd and 1760 yd distances. She then changed to backstroke, winning three national titles over 100 m (1956–1958) and setting world records in the 200 m backstroke (1957) and 4×100 m medley relay events ; she set her last record while winning the European title in Budapest, together with Ada den Haan, Cocky Gastelaars and Atie Voorbij. She qualified for the 1956 Summer Olympics, but could not participate due to the boycott of those games by the Netherlands.

İlkay Dikmen is a Turkish female swimmer competing in the breaststroke events. The 166 cm tall sportswoman at 60 kg (130 lb) is a member of Fenerbahçe Swimming in Istanbul.

Rie Kaneto is a Japanese competitive swimmer who specializes in breaststroke events. She won the gold medal in the 200 meter breaststroke at the 2016 Summer Olympics.