Adelaide Helen Grant Sinclair, OC OBE (January 16, 1900 – November 20, 1982) was a Canadian public servant. She was the second Chairman of the UNICEF Executive Board from 1951 to 1952, and from 1957 to 1967, she was the deputy executive director for programs of UNICEF, and one of the highest ranking women at the United Nations.

In 1930 she married Donald Black Sinclair, a Toronto lawyer, who died in 1938. The couple had no children.

From 1946 to 1957, she was the executive assistant to the Deputy Minister of National Health and Welfare and Canadian representative to UNICEF. From 1957 until her retirement in 1967, she was the Deputy Director of UNICEF.

In 1967, she was made an Officer of the Order of Canada. She received an honorary degree from the University of British Columbia in 1968.

Helen Battles Sawyer Hogg was an American-Canadian astronomer who pioneered research into globular clusters and variable stars. She was the first female president of several astronomical organizations and a notable woman of science in a time when many universities would not award scientific degrees to women. Her scientific advocacy and journalism included astronomy columns in the Toronto Star and the Journal of the Royal Astronomical Society of Canada. She was considered a "great scientist and a gracious person" over a career of sixty years.

Pauline Mills McGibbon served as the 22nd Lieutenant Governor of Ontario from 1974 to 1980. In addition to being the first woman to occupy that position, she was also the first woman to serve as a viceregal representative in Canadian history.

Sylvia Ostry, was a high-ranking Canadian economist and public servant. She was educated at McGill University and the University of Cambridge. 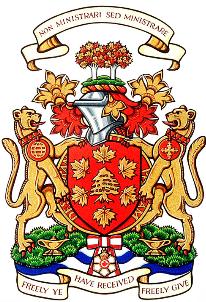 Douglass Residential College, part of Rutgers University-New Brunswick, is an undergraduate, non degree granting higher education program of Rutgers University-New Brunswick that is specifically for women. It succeeded the liberal arts degree-grantingDouglass College after it was merged with the other undergraduate liberal arts colleges at Rutgers-New Brunswick to form the School of Arts and Sciences in 2007. Female students enrolled at any of the academic undergraduate schools at Rutgers–New Brunswick, including, e.g., the School of Arts and Sciences, School of Engineering, School of Environmental and Biological Sciences, School of Pharmacy, Mason Gross School of the Arts, may now also enroll in Douglass Residential College, which offers special enrichment and career preparation experiences, special projects,and educational and service travel, and at which they must satisfy additional requirements specific to the college. Douglass seeks to provide the benefits of a close-knit small community of women students and offers programs specially designed to help women students to identify their unique abilities and develop confidence. These programs include, for example, a strong emphasis on opportunities to participate in service/learning trips in foreign countries, support for and expansion of racial and cultural diversity, and a wide range of training and enrichment activities offered by a career and leadership development center known as the "BOLD" Center.

Richard Leigh Cruess, is a Canadian orthopaedic surgeon and academic.

Micheline Beauchemin, was a Canadian textile artist and weaver.

Captain Stephen Wentworth Roskill, was a senior career officer of the Royal Navy, serving during the Second World War and, after his enforced medical retirement, served as the official historian of the Royal Navy from 1949 to 1960. He is now chiefly remembered as a prodigious author of books on British maritime history.

Hugh Ian Macdonald, OC, KLJ is a Canadian economist, civil servant, and was President of York University from 1974 to 1984.

Madeleine Alberta Fritz was a Canadian palaeontologist. She was a professor at the University of Toronto, where she taught vertebrate studies in the department of Geology. Fritz's writing on the fossil Bryozoa along with her research on the stratigraphy of Toronto and the surrounding areas were major contributions to the geological field.

Joseph W. Willard was a Canadian politician, economist and civil servant in the public health field. He served as Chairman of UNICEF from 1966 to 1968, and as Deputy Minister of Welfare in the Department of National Health and Welfare from 1960.

Air Commodore Helen Ferguson Renton, was a Scottish Royal Air force officer. From 1980 to 1986, she served as Director of the Women's Royal Air Force.

Commandant Dame Edith Margaret Drummond, was a senior British naval officer who served as Director of the Women's Royal Naval Service (WRNS) from 1964 to 1967.

Gail Cook-Bennett is a Canadian economist and corporate advisor. She has served on the Boards of Manulife Financial. and Canada Pension Plan Investment Board. She is a Member of the Order of Canada and has been recognized as one of Canada's Most Powerful Women Top 100.