Last updated April 14, 2021
For his son, who was also a general, see Adna R. Chaffee Jr.
2nd Chief of Staff of the United States Army

Adna Romanza Chaffee (April 14, 1842 – November 1, 1914) was a lieutenant general in the United States Army. Chaffee took part in the American Civil War and Indian Wars, played a key role in the Spanish–American War, and fought in the Boxer Rebellion in China. He was the Chief of Staff of the United States Army from 1904 to 1906, overseeing far-reaching transformation of organization and doctrine in the army. [1]

Chaffee was born in Orwell, Ohio. When the American Civil War broke out in July 1861, Chaffee enlisted in the Union Army as a private in the U.S. 6th Cavalry Regiment. In 1862, Chaffee was promoted to sergeant and took part in the Peninsular Campaign and the Battle of Antietam. In September of that year he was made the first sergeant of Company K. He was commissioned as a second lieutenant in May 1863. His 6th Cavalry, on detached service from General John Buford's 1st Union Cavalry Division, though outnumbered attacked a Confederate Cavalry regiment at Fairfield, Pennsylvania, just outside Gettysburg on July 3, 1863 (source, Wittenberg, Eric: Gettysburg: Forgotten Cavalry Actions). In the ensuing action he was wounded and briefly held a prisoner of the Confederates. He served with the 6th Cavalry for the remainder of the war, being twice wounded. In February 1865, he was promoted to first lieutenant. For his "gallant and meritorious" actions in the Battle of Dinwiddie Court House he was brevetted captain.

After the war, Chaffee became a member of the Military Order of the Loyal Legion of the United States.

Chaffee decided to remain with the army after the war. He was posted to the western frontier, and was promoted to captain of Regulars in October 1867. For the next thirty years he served in the Indian Wars, fighting the Central Plains and Southwestern tribes. In 1868, he was brevetted major for his actions at Paint Creek, Texas. In the following years he engaged the Indians many times, most notably at Red River, Texas, in 1874, and Big Dry Wash, Arizona, in 1882, for which he was brevetted lieutenant colonel.

With the outbreak of the Spanish–American War in 1898, Chaffee was assigned a brigade and was promoted to brigadier general of volunteers in May of that year, and in July after the victory at El Caney, to major general of volunteers. From late 1898 to May 1900, he served as the chief of staff to the military governor of Cuba, General Leonard Wood, being promoted to colonel of regulars in May 1899. He was a member of Society of the Army of Santiago, a military society for officers who had served in Cuba.

In June 1900, the Boxer Rebellion broke out in China. Colonel Chaffee was sent to China in July as the commander of the U.S. Army's China Relief Expedition. The Expedition was a part of the international force sent to rescue Western citizens and put down the rebellion. Chaffee participated in the Gaselee Expedition and subsequently the Battle of Peking, in which the legations were relieved. In 1900-1901 American forces were included in the Allied occupation of Peking (Beijing). As American commander Chaffee began public health, relief, and police operations in cooperation with Chinese officials. Chaffee concluded that Asiatics respected only the superior power. Reassigned to the Philippines he applied the lessons there, combining benevolence and public health measures with force and cooperation with local officials. [2]

Chaffee was one of the founders of the Military Order of the Dragon, a military society for officers who had served in China during the Boxer Rebellion. He served as the society's president from its founding in 1900 until his death.

General Chaffee was invested with the Grand Cross of the Legion of Honor by the president of France.

In his retirement, he moved to Los Angeles, where he was appointed president of the Board of Public Works for the city of Los Angeles.

Chaffee was married twice; in September 1867 he married Kate Haynie Reynolds, a young widow who died two and a half years later.

In 1875, he married Annie Frances Rockwell. Their son Adna R. Chaffee Jr. also became a general and was one of the fathers of the U.S. Army's armored forces, having a light tank, the M24 Chaffee, named in his honor.

The city of Chaffee, Missouri, was named in his honor when founded in 1905. 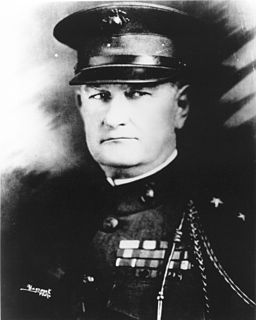 Wendell Cushing Neville was a major general of the United States Marine Corps. He was a Medal of Honor recipient and 14th Commandant of the Marine Corps between 1929 and 1930. 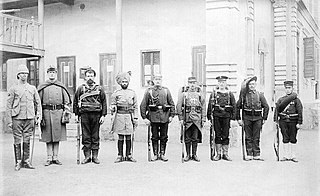 The China Relief Expedition was an expedition in China undertaken by the United States Armed Forces to rescue United States citizens, European nationals, and other foreign nationals during the latter years of the Boxer Rebellion, which lasted from 1898 to 1901. The China Relief Expedition was part of a multi-national military effort known as the Eight-Nation Alliance to which the United States contributed troops between 1900 and 1901. Towards the close of the expedition, the focus shifted from rescuing non-combatants to suppressing the rebellion. By 1902, at least in the city of Peking, the Boxer Rebellion had been effectively controlled.

Adna Romanza Chaffee Jr. was an officer in the United States Army, called the "Father of the Armored Force" for his role in developing the U.S. Army's tank forces.

Wesley Merritt was an American major general who served in the cavalry of the United States Army during the American Civil War, American Indian Wars, Spanish–American War, and the Philippine–American War. Following the latter war, he became the first American Military Governor of the Philippines.

Littleton Tazewell "Tony" Waller was a career officer in the United States Marine Corps, who served in the Spanish–American War, the Caribbean and Asia. He was court martialled and acquitted for actions during the Philippine–American War where he led an ill-fated expedition across the island of Samar. He retired from the Marines holding the rank of major general.

The Military Order of the Loyal Legion of the United States (MOLLUS), or simply as the Loyal Legion is a United States patriotic order, organized April 15, 1865, by officers of the Army, Navy, or Marine Corps of the United States who "had aided in maintaining the honor, integrity, and Supremacy Clause of the national movement" during the American Civil War. It was formed by loyal Union military officers in response to rumors from Washington of a conspiracy to destroy the Federal government by assassination of its leaders, in the immediate aftermath of the assassination of President Abraham Lincoln. They stated their purpose as the cherishing of the memories and associations of the war waged in defense of the unity and indivisibility of the Republic; the strengthening of the ties of fraternal fellowship and sympathy formed by companionship in arms; the relief of the widows and children of dead companions of the order; and the advancement of the general welfare of the soldiers and sailors of the United States. As the original officers died off, the veterans organization became an hereditary society. The modern organization is composed of men who are descendants of these officers, and other men who share the ideals of the Order, who collectively are considered "Companions". A female auxiliary, Dames of the Loyal Legion of the United States (DOLLUS), was formed in 1899 and accepted as an affiliate in 1915.

The Eight-Nation Alliance was a multinational military coalition that invaded North China in 1900 to relieve the foreign legations in Beijing besieged by the popular Boxer militia determined to expunge foreign influence and government troops determined to defend China. The Allied forces consisted of approximately 45,000 troops from the eight nations of Germany, Japan, Russia, Britain, France, the United States, Italy and Austria-Hungary. Neither the Chinese nor the foreign allies issued a formal declaration of war, and no treaty or formal agreement bound the Alliance together. Western historians revised history to define the first phase of hostilities as starting in August 1900 and "more or less a civil war", despite the fact that the Battle of the Taku Forts (1900), which took place in June, was what pushed the Qing government to support the Boxers. With the success of the invasion, the later stages developed into a punitive expedition that pillaged Beijing and North China for over a year. The fighting ended with the signing of the Boxer Protocol. 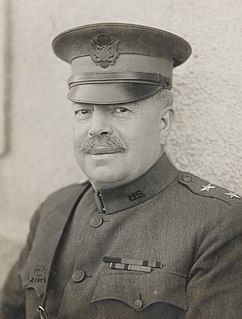 Joseph Theodore Dickman was a United States Army officer who saw service in five wars, rising to the rank of major general. 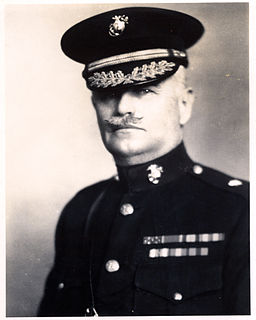 John Twiggs Myers was a United States Marine Corps general who was most famous for his service as the American Legation Guard in Peking during the Boxer Rebellion.

Kenner Garrard was a brigadier general in the Union Army during the American Civil War. A member of one of Ohio's most prominent military families, he performed well at the Battle of Gettysburg, and then led a cavalry division in the army of Major General William T. Sherman during the Atlanta Campaign. He developed a reputation for personal bravery and was cited for gallantry at the Battle of Nashville as an infantry division commander. 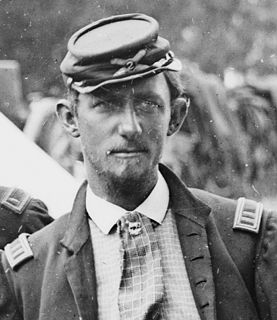 Alexander Cummings McWhorter Pennington Jr., was an artillery officer and brigadier general in the United States Army and a veteran of both the American Civil War and Spanish–American War.

Charles Austin Coolidge, Jr. was a United States Army soldier who served in the American Civil War, the American West, Spanish–American War, and in Asia before retiring in 1903 as a brigadier general.

The Military Order of the Dragon was an exclusive fraternal order founded in 1900 by members of the China Relief Expedition, a U.S. military force that participated in the Boxer Rebellion in Imperial China.

Lieutenant General Sir George Lloyd Reilly Richardson was an officer in the British Indian Army from 1866 to 1909. He served across South East Asia, becoming a veteran of the Second Anglo-Afghan War and Boxer Rebellion, and later as commander of the Ulster Volunteer Force in Ireland.

Major-General Sir Hamilton St Clair Bower was a British Indian Army officer who wrote about his travels through Chinese Turkestan and Tibet.

Julian Robert Lindsey was a United States Army cavalry officer in the late 19th and early 20th centuries. He served in the China Relief Expedition, the Pancho Villa Expedition and commanded a US army brigade as a Brigadier General in World War I.