Adolf III of the Marck

Adolph was the second son of Count Adolph II of the Marck and Margaret of Cleves.

On 16 November 1357 Pope Innocent VI appointed him the Bishop of Münster. In 1362 he signed a contract with his uncle Bishop Engelbert III of the Marck of Liège whereby he would inherit Cleves in the likely event Count John of Cleves died childless. On 13 June 1363 he was appointed the Archbishop of Cologne against the favourite John of Virneburg, but by the end of the year had resigned from the position to focus on the County of Cleves, despite the fact that his short tenure was scandalous and ridden with controversy. 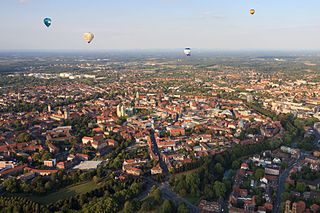 Münster is an independent city in North Rhine-Westphalia, Germany. It is in the northern part of the state and is considered to be the cultural centre of the Westphalia region. It is also capital of the local government region Münsterland. Münster was the location of the Anabaptist rebellion during the Protestant Reformation and the site of the signing of the Treaty of Westphalia ending the Thirty Years' War in 1648. Today it is known as the bicycle capital of Germany.

In 1368 he succeeded his uncle John of Cleves and could maintain his rule there through the support of Liège. In 1369 he married Margaret of Jülich, daughter of Gerhard VI of Jülich, Count of Berg and Ravensberg and had fourteen children, at least five of whom did not survive infancy.

After his brother Engelbert III of the Marck died without heirs in 1391, Adolph inherited the Marck too. However, he gave Marck to his son Dietrich in 1393.

Adolph died in 1394 and was succeeded in Cleves by another of his sons, Adolph.

Cleves and Marck were reunited again 4 years later, when Dietrich died and was succeeded by Adolph IV.