Adolphe Joseph Thomas Monticelli (October 14, 1824 – June 29, 1886) was a French painter of the generation preceding the Impressionists.

Monticelli was born in Marseille in humble circumstances. He attended the École Municipale de Dessin in Marseille from 1842 to 1846, and continued his artistic training in Paris, where he studied under Paul Delaroche at the École des Beaux-Arts. In Paris he made copies after the Old Masters in the Louvre, and admired the oil sketches of Eugène Delacroix. [1] In 1855 he met Narcisse Diaz, a member of the Barbizon school, and the two often painted together in the Fontainebleau Forest. Monticelli frequently adopted Diaz's practice of introducing nudes or elegantly costumed figures into his landscapes. [1]

He developed a highly individual Romantic style of painting, in which richly colored, dappled, textured and glazed surfaces produce a scintillating effect. He painted courtly subjects inspired by Antoine Watteau; he also painted still lifes, portraits, and Orientalist subjects that owe much to the example of Delacroix.

After 1870, Monticelli returned to Marseille, where he would live in poverty despite a prolific output, selling his paintings for small sums. An unworldly man, he dedicated himself singlemindedly to his art.

The young Paul Cézanne befriended Monticelli in the 1860s, and the influence of the older painter's work can be seen in Cézanne's work of that decade. Between 1878 and 1884 the two artists often painted landscapes together, once spending a month roaming the Aix countryside. Although Monticelli experimented briefly around 1870 with a treatment of light reflecting the discoveries of the Impressionists, he found the objectivity of this approach uncongenial.

Confronted with criticism of his style of painting Monticelli himself remarked, "I paint for thirty years from now". [2] His work reached its greatest spontaneity in the decade before his death in 1886.

More than a century after his death, Monticelli's art is still subject to controversy.

In its painterly freedom Monticelli's work prefigures that of Vincent van Gogh, who greatly admired his work after seeing it in Paris when he arrived there in 1886. Van Gogh immediately adopted a brighter palette and a bolder attack, and later remarked, "I sometimes think I am really continuing that man." [3] In 1890, Van Gogh and his brother Theo were instrumental in publishing the first book about Monticelli. [1]

Monticelli's reputation grew after his death. Among his collectors was Oscar Wilde who, after going to prison in 1895, wrote of his bankruptcy in a letter to Lord Alfred Douglas, "De Profundis": "That all my charming things were to be sold: my Burne-Jones drawings: my Whistler drawings: my Monticelli: my Simeon Solomons: my china: my Library..."

Others have expressed disregard of Monticelli's work. In a statement published in 2005 in The Guardian, Sir Timothy Clifford, director general of the National Galleries of Scotland, Edinburgh, even chose Monticelli's A Garden Fete as the worst painting in Britain, and commented, "We have been bequested eight paintings by Monticelli, each one more hideous than the last. In my 21 years here, none has been hung because I think Monticelli produces screamingly awful art. I call this one a Fete Worse Than Death." [4] [5]

A monument honoring Monticelli, designed in 1909 by the sculptor Auguste Carli, is installed in the Palais Longchamp Marseille.

From April 25 till September 27, 2015, an exhibition entitled "Van Gogh and Co. Criss-crossing the collection" [7] at the Kröller-Müller Museum in Otterlo, The Netherlands, displayed paintings by Van Gogh and his predecessors, contemporaries and followers, among them François Bonvin, Charley Toorop, Henri Fantin-Latour, Jean-Baptiste Corot, Paul Cézanne, Bart van der Leck and Adolphe Monticelli. 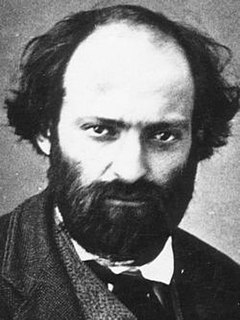 Paul Cézanne was a French artist and Post-Impressionist painter whose work laid the foundations of the transition from the 19th-century conception of artistic endeavor to a new and radically different world of art in the 20th century.

Vincent Willem van Gogh was a Dutch post-impressionist painter who posthumously became one of the most famous and influential figures in the history of Western art. In a decade, he created about 2,100 artworks, including around 860 oil paintings, most of which date from the last two years of his life. They include landscapes, still lifes, portraits and self-portraits, and are characterised by bold colours and dramatic, impulsive and expressive brushwork that contributed to the foundations of modern art. He was not commercially successful, and his suicide at thirty-seven came after years of depression and poverty. 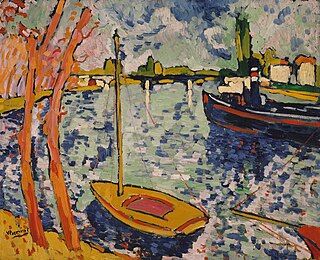 Maurice de Vlaminck was a French painter. Along with André Derain and Henri Matisse he is considered one of the principal figures in the Fauve movement, a group of modern artists who from 1904 to 1908 were united in their use of intense colour. Vlaminck was one of the Fauves at the controversial Salon d'Automne exhibition of 1905. 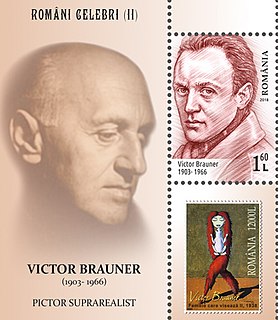 Victor Brauner was a Romanian sculptor and painter of surrealistic images. 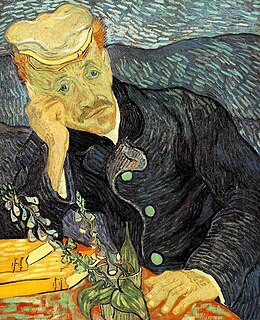 Portrait of Dr. Gachet is one of the most revered paintings by the Dutch artist Vincent van Gogh. It depicts Dr. Paul Gachet, a homeopathic doctor and artist with whom van Gogh resided following a spell in an asylum at Saint-Rémy-de-Provence. Gachet took care of Van Gogh during the final months of his life. There are two authenticated versions of the portrait, both painted in June 1890 at Auvers-sur-Oise. Both show Gachet sitting at a table and leaning his head on his right arm, but they are easily differentiated in color and style. There is also an etching.

L'Estaque is a village in southern France, just west of Marseille. Administratively, it belongs to the commune of Marseille. 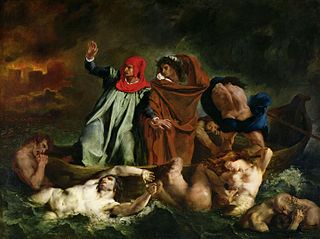 The Barque of Dante, also Dante and Virgil in Hell, is the first major painting by the French artist Eugène Delacroix, and is a work signalling the shift in the character of narrative painting, from Neo-Classicism towards Romanticism. The painting loosely depicts events narrated in canto eight of Dante's Inferno; a leaden, smoky mist and the blazing City of the Dead form the backdrop against which the poet Dante fearfully endures his crossing of the River Styx. As his barque ploughs through waters heaving with tormented souls, Dante is steadied by Virgil, the learned poet of Classical antiquity. 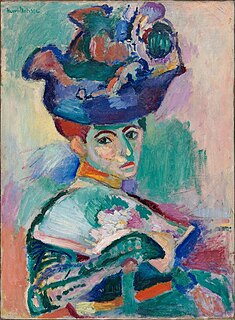 Fauvism /ˈfoʊvɪzm̩/ is the style of les Fauves, a group of early 20th-century modern artists whose works emphasized painterly qualities and strong color over the representational or realistic values retained by Impressionism. While Fauvism as a style began around 1904 and continued beyond 1910, the movement as such lasted only a few years, 1905–1908, and had three exhibitions. The leaders of the movement were André Derain and Henri Matisse.

Poppy Flowers is a painting by Vincent van Gogh with an estimated value of US$50 million to $55 million; it was stolen from Cairo's Mohamed Mahmoud Khalil Museum twice; first in 1977, then again in August 2010 and has yet to be found. 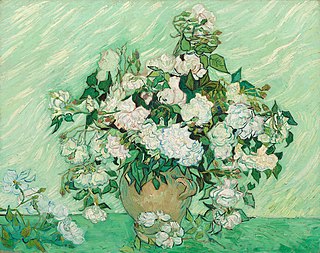 Still Life: Vase with Pink Roses was painted in 1890 by Vincent van Gogh in Saint-Rémy. At the time the work was painted Van Gogh was readying himself to leave the Saint-Rémy asylum for the quiet town of Auvers-sur-Oise outside of Paris. This and the similarly-dated Pink Roses reflect the optimism Van Gogh felt at that time about his future, both in his choice of flowers as a subject and the colors used. The painting is owned by the National Gallery of Art of Washington, D.C.

Farmhouse in Provence, also known as Entrance Gate to a Farm with Haystacks, is an oil-on-canvas painting produced in 1888 by Dutch painter Vincent van Gogh in Arles, Provence, at the height of his career. Partially due to having been inspired by painter Adolphe Monticelli, Van Gogh sought the Provence region of France to further expand his painting skill and experience. Van Gogh used several pairs of complementary colors in the Farmhouse in Provence, the color contrast bringing an intensity to his work. The painting is owned by the National Gallery of Art in Washington, D.C. 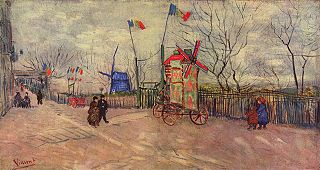 The Montmartre paintings are a group of works that Vincent van Gogh made in 1886 and 1887 of the Paris district of Montmartre while living there, at 54 Rue Lepic, with his brother Theo. Rather than capture urban settings in Paris, van Gogh preferred pastoral scenes, such as Montmartre and Asnières in the northwest suburbs. Of the two years in Paris, the work from 1886 often has the dark, somber tones of his early works from the Netherlands and Brussels. By the spring of 1887, van Gogh embraced use of color and light and created his own brushstroke techniques based upon Impressionism and Pointillism. The works in the series provide examples of his work during that period of time and the progression he made as an artist. 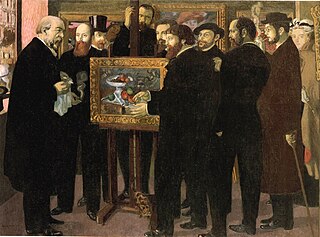 Houses at Auvers is an oil painting by Vincent van Gogh. It was created towards the end of May or beginning of June 1890, shortly after he had moved to Auvers-sur-Oise, a small town northwest of Paris, France.

Capitale & Victor ORLY is a French gallery established by the cultural association Capitale in Marseille, France in 2005. The gallery presents works of international contemporary artists. The gallery is managed by Guennadi Grebniov. 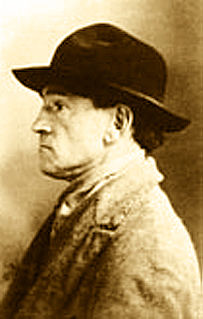 Louis Mathieu Verdilhan was a French artist known especially for his paintings of the Old Port of Marseille.