Aerofan was founded in 1992 operating just one Cessna 152 for private pilot courses. Between 2002 and 2007 the flying school experienced several years of solid growth, largely due to its high percentage of non-Spanish students. During these years Aerofan FTO was one of the leading pilot schools in Spain focused on international flight training.

In 2009 owner Fernando González launched IMD Airways. For a period of two years IMD operated an MD87 in wet-lease operations. Since the launching of IMD, Aerofan FTO saw no further expansion or growth. Since 2011 Aerofan has seen a significant fleet reduction and now operates only three aircraft. Its other aircraft have all been sold, or scrapped.

IMD Airways operations have ceased. Aerofan however continues to operate.

The Aerofan fleet includes the following aircraft (as of 11 January 2012) : 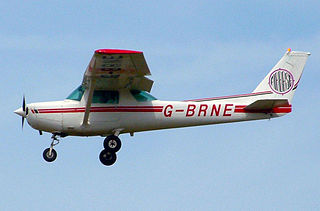 The Cessna 152 is an American two-seat, fixed-tricycle-gear, general aviation airplane, used primarily for flight training and personal use. It was based on the earlier Cessna 150 incorporating a number of minor design changes and a slightly more powerful engine with a longer time between overhaul.

A flying club or aero club is a not-for-profit, member-run organization that provides its members with affordable access to aircraft.

The Hong Kong Aviation Club was established in 1982 upon the amalgamation of the Hong Kong Flying Club, the Aero Club of Hong Kong and the Far East Flying & Technical School. 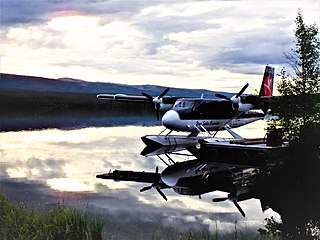 The John D. Odegard School of Aerospace Sciences is a multidisciplinary college within the University of North Dakota (UND) in Grand Forks, North Dakota. The school was formed in 1968. The majority of the school's fleet of over 120 aircraft is based at nearby Grand Forks International Airport and is the largest fleet of civilian flight training aircraft in North America. UND Aerospace also operates flight training centers in Crookston, Minnesota, and Phoenix, Arizona. Today, the school has many aerospace-related programs including commercial aviation, Unmanned aircraft systems operations, air traffic control, airport management, Space Studies, Computer Science, Atmospheric Sciences, and Earth System Science & Policy. Currently, the school has over 500 faculty and 1,900 students making it the second largest of UND's degree-granting colleges. The present dean of the school is Dr. Paul Lindseth.

The Moncton Flight College (MFC) is a pilot training school based at the Greater Moncton International Airport (CYQM) in Dieppe, New Brunswick, Canada. They have a second location at the Fredericton International Airport (YFC) in Lincoln, NB. In a year, MFC has the capacity to train 450 students between the Moncton and Fredericton Campus. Currently the Moncton Campus offers domestic and international programs with a 260-student capacity and a staff of 55. The Fredericton campus is primarily for Chinese student training with some modular based flight training and has a capacity of 190 students and employs 70 people. Both of the campuses have on-site kitchens and residences. MFC is the largest private flight school in Canada. It is also one of six, out of 150 schools in Canada, to be given integrated status. The college has trained over 20,000 pilots from approximately 70 countries since 1929. MFC has an approved FTU, ATO and AMO from Transport Canada and also has CAAC (China) approval.

Newtownards Airport is a local airfield in Newtownards, County Down, Northern Ireland. It is located 8.5 NM east of Belfast. This airport not only offers light aircraft flights but offers Helicopter flights which are operated by HeliPower. This airport also has an onsite restaurant called Cloud Nine.

Jat Airways AVIO taxi was a taxi airline company in Serbia with bases at Belgrade Nikola Tesla Airport and Vršac Airport. It was one of the three air taxi companies after Prince Aviation and Air Pink. Jat Airways AVIO Taxi was a subsidiary of the national air carrier of Serbia, Jat Airways. 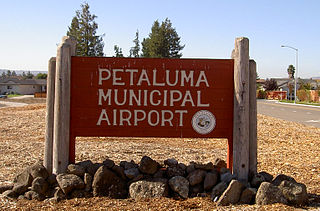 Westward Airways is an airline based at Land's End Airport, near St Just and Penzance in Cornwall, England, UK. Until February 2009 it operated sight seeing flights in the local area, also running the former Lands End Flying School and is the operator of Land's End Airport. After a review of the operations, it was decided to close the Lands End Flying School as of Saturday 31 January 2009, after which point Westward Airways also terminated the operation of sightseeing flights. Whilst the two Cessna 152s will be disposed of, the remaining pair of Cessna 172s are to be transferred to Westward Airway's sister company; the Isles of Scilly Skybus, who will then resuming sightseeing flights under their own AOC.

Weston Airport, also called Dublin Weston Airport, is a historic publicly licensed general aviation (GA) Irish airport serving Dublin and its environs since the early 1930s. It is located between Leixlip, County Kildare, and Lucan, Dublin 8 NM west of Dublin. Its traffic is primarily private and commercial flight training as well as business/executive. It is the leading General Aviation airport in Ireland and the only GA airport in the greater Dublin region, and is home to one of Ireland's two approved training organisations for ab-initio professional pilot training.

The Airways flying club was formed in 1948 under the name of the Airways Aero Club, by employees of British European Airways (BEA) and British Overseas Airways Corporation (BOAC). The club is operated by Airways Aero Associations Ltd, and flies out of Wycombe Air Park.

The North American Institute of Aviation (NAIA) was a private, FAA Part-141 flight school located in Conway, South Carolina, in the United States. Founded on July 7, 1972 in Hammonton, New Jersey, then later moved to South Carolina in 1978, NAIA specialized in flight and aircraft maintenance training. It has also had a campus in Las Cruces, New Mexico. The school had close connections to North European Aviation Resources (NEAR) of Vigra, Norway, and was for a period of time the ab-initio school of Scandinavian Airlines. The school subsequently commanded an excellent reputation in Northern Europe. NAIA boasted an international student population and graduates work for airlines worldwide. The school concentrated its efforts on FAA Part-141 operations and their European JAR-FCL approved program in cooperation with NEAR, which maintained a representative at the school. NAIA operated out of the Conway-Horry County Airport where it was also the fixed-base operator (FBO).

Air Hamburg Luftverkehrsgesellschaft mbH is a German airline based in Hamburg. It offers charter international flights with business jets.

Air Republiq Airlines is an airline in the Philippines running unscheduled flights to the northern Philippines.

Hawa Air was a charter airline that operated from Deurne, Belgium, in the 1970s and 1980s. The airline flew international services on jet aircraft, but included a flight school, courier service, overnight delivery service and an aircraft maintenance facility.

The Haryana Institute of Civil Aviation (HICA) is a Government of Haryana undertaking that operates 3 flying clubs in the state of Haryana to impart pilot training.

Madras Flying Club is an aviation academy in Tiruchi, India. It offers courses on pilot training, aircraft maintenance, and cabin crew management, among others. It is one of the oldest aviation academies in the country.