After the Rain (film)

After the Rain (雨あがる, Ame agaru) is a 1999 Japanese and French film. The story is based on the last script written by Akira Kurosawa and is directed by his former assistant director of 28 years, Takashi Koizumi. It was awarded a Japanese Academy Award in 1999. It was chosen as Best Film at the Japan Academy Prize ceremony. [2]

A group of travelers are stranded in a small country inn when the local river floods. As the bad weather continues, tensions rise amongst the travelers trapped at the inn. A traveling rōnin (masterless samurai), Ihei Misawa takes it upon himself to cheer everyone up by arranging a splendid feast. Unfortunately he has no money and in order to pay for the feast he visits the local dojos and challenges the masters there for payment, termed in the film as prize fighting. Later, after breaking up a duel between two young retainers of the local clan, the daimyō Shigeaki was impressed by Misawa's skill and temperament, Lord Shigeaki offers Misawa employment as a sword master. Misawa has a tense interaction with the lord and his retainers, revealing his prowess at their expense.

The film also shows the tender relationship he has with his wife, Tayo, and provides insights into the way of life of a rōnin's wife. 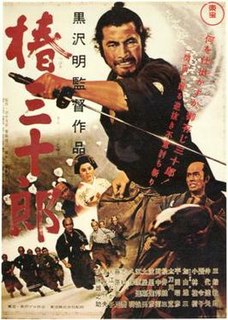 Takashi Koizumi is a Japanese film director. After graduating from Waseda University, he served as an assistant director for Akira Kurosawa for many years. He has received four nominations and four wins. 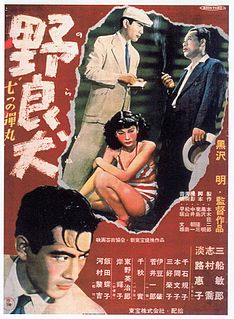 Stray Dog is a 1949 Japanese crime drama film noir directed by Akira Kurosawa and starring Toshiro Mifune and Takashi Shimura. It was Kurosawa's second film of 1949 produced by Film Art Association and released by Shintoho. It is also received as a detective movie that explores the mood of Japan during its painful postwar recovery. The film is considered a precursor to the contemporary police procedural and buddy cop film genres.

Akira Terao is a Japanese musician, singer and movie actor. As of 2012, he is the only male actor to have received both the Japan Record Award and the Japan Academy Award for Outstanding Performance by an Actor in a Leading Role. 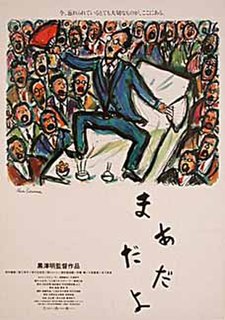 Scandal is a 1950 film written and directed by Akira Kurosawa. The film stars Toshirō Mifune, Takashi Shimura and Shirley Yamaguchi.

Half a Confession is a 2004 Japanese film directed by Kiyoshi Sasabe. It was chosen as Best Film at the Japan Academy Prize ceremony.

Events in the year 1985 in Japan which correspond to Shōwa 60 (昭和60年) in the Japanese calendar.

The Story of Osaka Castle is a 1961 color Japanese film directed by Hiroshi Inagaki based on historical events taking place in Japan during the beginning of the 17th century. It was also known as Daredevil in the Castle and The Tale of Osaka Castle in the UK.

A Samurai Chronicle is a 2014 Japanese film directed by Takashi Koizumi.

The 23rd Japan Record Awards ceremony was held on 31 December 1981 at the Imperial Theatre, Tokyo, and was broadcast live in Japan through the TBS Television network. The broadcast ran from 19:00 (JST) to 20:54 (JST). Keizō Takahashi hosted the ceremony for the thirteenth time.