Last updated October 13, 2021
For other uses, see Agen (disambiguation).
For the Agen meteorite of 1814, see Meteorite falls.
Prefecture and commune in Nouvelle-Aquitaine, France

The commune of Agen (French:  [aʒɛ̃] , locally  [aˈʒɛŋ] ; Occitan:  [aˈdʒen] ) is the prefecture of the Lot-et-Garonne department in Nouvelle-Aquitaine, southwestern France. It lies on the river Garonne 135 kilometres (84 miles) southeast of Bordeaux.

The city of Agen lies in the southwestern department of Lot-et-Garonne in the Aquitaine region. The city centre lies on the east bank of the river Garonne close to the Canal de Garonne, approximately halfway between Bordeaux (132 km, 82 mi) and Toulouse (107 km, 66 mi).

Agen features an oceanic climate (Cfb), in the Köppen climate classification. Winters are mild and feature cool to cold temperatures while summers are mild and warm. Rainfall is spread equally throughout the year； however, most sunshine hours are from March–September.

From Occitan Agen (1197), itself from Latin Aginnum (3rd century Itinéraire d'Antonin), from a Celtic root agin- meaning "rock or height". [7]

The town has a higher level of unemployment than the national average. Major employers include the pharmaceutical factory UPSA.

The old centre of town contains a number of medieval buildings.

The twelfth century Agen Cathedral, dedicated to Saint Caprasius, is one of the few large churches in France with a double nave, a regional trait also found in the Church of the Jacobins in nearby Toulouse.

The Saint Hilaire church, dedicated to the theme of the Holy Trinity which the Saint in question did a lot to defend, is notable for its unusual statues in front of the Church – Moses on the right, and St Peter on the left.

The Fine Arts museum, Musée des Beaux Arts contains artefacts, furniture and sculptures from prehistoric times onwards. The art gallery contains several hundred works, including several by Goya, and others by Bonnard and Seurat. The collection also contains a large number of works by artists who lived locally. The museum is made up of twenty or so rooms. [10]

The Canal des Deux Mers, which joins the Mediterranean with the Atlantic, crosses the river Garonne at Agen via the town's famous canal bridge.

Louis Arthur Ducos du Hauron (1837 – 1920), a pioneer of colour photography lived and worked in Agen. He developed practical processes for colour photography on the three-colour principle, using both additive and subtractive methods. [11] [12] [13] In 1868 he patented his ideas (French Patent No. 83061) and in 1869 he published them in Les couleurs en photographie, solution du problème.

The most widely reproduced of his surviving colour photographs is the View of Agen, an 1877 landscape, printed by the subtractive assembly method which he pioneered. Several different photographs of the view from his attic window, one dated 1874, also survive.

There are two cinemas, one a commercial multiscreened affair, the other an arts cinema run by a voluntary organization. The latter organizes film festivals every year.

Rugby is extremely popular in the town, and the local team, SU Agen, is enthusiastically supported. The town also serves as the base for the Team Lot-et-Garonne cycling team.

Agen is connected, by the A62 autoroute, to both Toulouse and Bordeaux.

The Agen Airport is serviced by Airlinair service to Paris Orly 6 days a week. It is also used for business and leisure flying.

Agen stands on the voie verte cycle path between the Mediterranean and close to Bordeaux.

Agen is the seat of a Roman Catholic diocese that comprises the Département of Lot and Garonne. It is a suffragan of the archdiocese of Bordeaux.

As place of birth

Agen is the "capital of the prune", a local product consumed as a sweet, either stuffed with prune purée or in pastries, or as a dessert, e.g., prunes soaked in Armagnac, a type of brandy. On the last weekend of August, a prune festival comprises rock concerts, circus performances and prune tastings.

The first Jews settled in the town in the twelfth century AD. They were expelled from the town in 1306. A number of Jews returned to the town in 1315, and a "Rue des Juifs" is documented ever since this period. In 1968, about 600 Jews lived in the town, though most of them had emigrated from North Africa.[ citation needed ] A Jewish synagogue still exists in the town. [16] 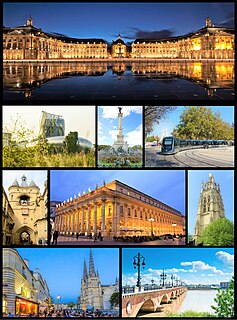 Bordeaux is a port city on the river Garonne in the Gironde department, Southwestern France. 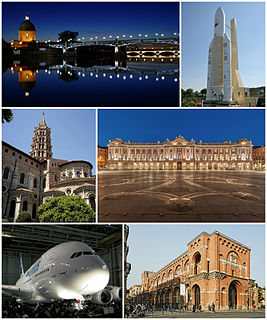 Toulouse is the prefecture of the French department of Haute-Garonne and of the larger region of Occitanie. The city is on the banks of the River Garonne, 150 kilometres from the Mediterranean Sea, 230 km (143 mi) from the Atlantic Ocean and 680 km (420 mi) from Paris. It is the fourth-largest commune in France, with 479,553 inhabitants within its municipal boundaries, after Paris, Marseille and Lyon, ahead of Nice; it has a population of 1,360,829 within its wider metropolitan area.

Aquitaine, archaic Guyenne or Guienne, is an historical region of southwestern France and a former administrative region of the country. Since 1 January 2016 it has been part of the region of Nouvelle-Aquitaine. It is situated in the far southwest corner of Metropolitan France, along the Atlantic Ocean and the Pyrenees mountain range on the border with Spain. It is composed of the five departments of Dordogne, Lot-et-Garonne, Pyrénées-Atlantiques, Landes and Gironde. In the Middle Ages, Aquitaine was a kingdom and a duchy, whose boundaries fluctuated considerably. 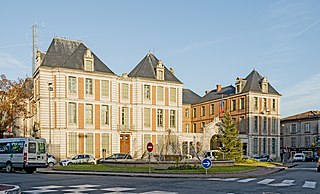 Tarn-et-Garonne is a department Southwestern France. It is traversed by the rivers Tarn and Garonne, from which it takes its name. This area was originally part of the former provinces of Quercy and Languedoc. The department was created in 1808 by Napoleon, with territory being taken from the departments of Lot, Haute-Garonne, Lot-et-Garonne, Gers and Aveyron.

The following is a list of the 319 communes of the French department of Lot-et-Garonne. 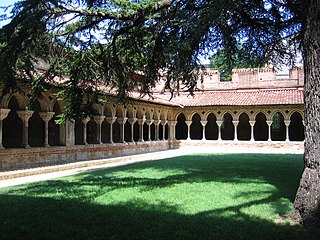 Moissac is a commune in the Tarn-et-Garonne department in the Occitanie region in southern France. The town is situated at the confluence of the rivers Garonne and Tarn at the Canal de Garonne. Route nationale N113 was constructed through the town and between Valence-d'Agen and Castelsarrasin. 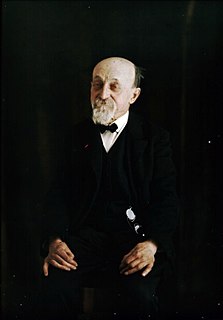 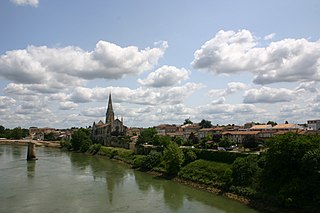 Langon is a commune in the Gironde department in Nouvelle-Aquitaine in southwestern France. Langon serves as the seat of its district, canton and subprefecture. Its inhabitants are called Langonnais. 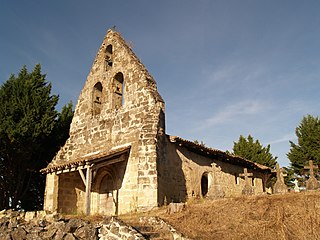 Montastruc is a commune in the Lot-et-Garonne department in south-western France. 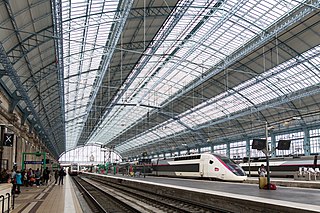 Bordeaux-Saint-Jean or formerly Bordeaux-Midi is the main railway station in the French city of Bordeaux. It is the southern terminus of the Paris–Bordeaux railway, and the western terminus of the Chemins de fer du Midi main line from Toulouse. 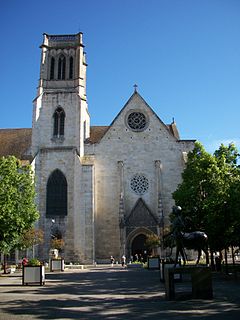 Agen Cathedral is a Roman Catholic cathedral located in Agen, Lot-et-Garonne, Aquitaine, France. It is dedicated to Saint Caprasius. It was built in the 12th century as a collegiate church and is a UNESCO World Heritage Site.

Valence, also known as Valence-d'Agen, is a commune in the Tarn-et-Garonne department in the Occitanie region in southern France.

Lamagistère is a commune in the Tarn-et-Garonne department in the Occitanie region in southern France. Inhabitants of the district are known as les Magistériens. 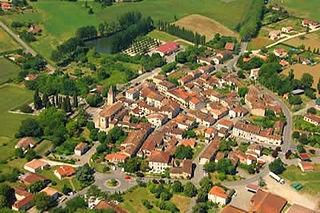 Francescas is a commune in the Lot-et-Garonne department in south-western France. While its inhabitants number less than eight hundred, it is neither isolated, nor without commerce. It has a bakery, grocery, butcher, gas station/news agent, bank, pharmacy, post office, hairdresser, tailor, small bar/hotel, restaurant, small regional museum, and gendarmerie.

Lafox is a commune in the Lot-et-Garonne department in south-western France.

Romestaing is a commune in the Lot-et-Garonne département in south-western France.

Saint-Jean-de-Thurac is a commune in the Lot-et-Garonne department in south-western France. It lies to the west of the town of Agen. The departmental road D813 which routes westward from Agen to Toulouse passes through the commune. There are no commercial premises in this commune and the district derives its name from a thirteenth-century Catholic church which lies just off the D813. Beside the church is an elementary school and the Mairie, or town hall, building.

The railway from Bordeaux to Sète is an important French 476-kilometre long railway line, that connects the southwestern port city Bordeaux to the southern port Sète via Toulouse and Narbonne. The railway was opened in several stages between 1855 and 1858.