The Aghlabids (Arabic : الأغالبة‎) were an Arab [6] dynasty of emirs from the Najdi tribe of Banu Tamim, [7] who ruled Ifriqiya and parts of Southern Italy, nominally on behalf of the Abbasid Caliph, for about a century, until overthrown by the new power of the Fatimids.

In 800, the Abbasid Caliph Harun al-Rashid appointed Ibrahim I ibn al-Aghlab, son of a Khurasanian Arab commander from the Banu Tamim tribe, [8] as hereditary Emir of Ifriqiya as a response to the anarchy that had reigned in that province following the fall of the Muhallabids. At that time there were perhaps 100,000 Arabs living in Ifriqiya, although the Berbers still constituted the great majority. [9]

Ibrahim was to control an area that encompassed eastern Algeria, Tunisia and Tripolitania. [10] Although independent in all but name, his dynasty never ceased to recognise Abbasid overlordship. The Aghlabids paid an annual tribute to the Abbasid Caliph and their suzerainty was referenced in the khutba at Friday prayers. [11]

After the pacification of the country Ibrahim ibn al-Aghlab established a residence at a new capital, al-Abbasiyya, which was founded outside Kairouan, partly to distance himself from the opposition of the Malikite jurists and theologians, who condemned what they saw as the luxurious life of the Aghlabids (not to mention the fact that the Aghlabids were mu'tazilites in theology, and Hanafis in fiqh-jurisprudence), and disliked the unequal treatment of the Muslim Berbers. Additionally, border defenses (ribat) were set up in Sousse and Monastir. The Aghlabids also built up the irrigation of the area and enhanced the public buildings and mosques of [10] al-'Abbāsiyya. It was recorded that 5,000 black Zanj slaves were used which were supplied via trans-Saharan trade. [12]

One unique feature of the Aghlabids is that despite the political differences and rivalry between Aghlabids, who served under the Abbasid Caliphate, and the Umayyad Emirate of Cordoba, the Muslims in Spain also sent a fleet under Asba' ibn Wakil to aid the Aghlabid conquest of Sicily (see Muslim conquest of Sicily). Ibn Kathir recorded that a joint force of 300 Umayyad and Aghlabid ships were present. [13] The Aghlabid garrison at Mineo managed to get into contact with the Andalusian Umayyads, who immediately agreed to the alliance, provided that Asbagh was recognized as the overall commander, and, together with fresh troops from Ifriqiya, they marched on Mineo. Theodotus[ who? ] retreated to Enna and the siege of Mineo was broken in July or August 830. [14] [15] [16] The combined Ifriqiyan and Andalusian army then torched Mineo and laid siege to another town, possibly Calloniana (modern Barrafranca). However, a plague broke out in their camp, causing the death of Asbagh and many others. The town fell later, in autumn, but the Arabs' numbers were depleted to the point where they were forced to abandon it and retreat west. Theodotus launched a pursuit and inflicted heavy casualties, and, thereafter, most of the Andalusians departed the island. However, Theodotus too was killed at this time, possibly in one of these skirmishes. [17] [18]

Under Ziyadat Allah I (817–838) came a revolt of Arab troops in 824, which was not quelled until 836 with the help of the Berbers. The conquest of Byzantine Sicily from 827 under Asad ibn al-Furat was an attempt to keep the unruly troops under control – it was only achieved slowly, and only in 902 was the last Byzantine outpost taken. Plundering raids into mainland Italy, which included the sack of Rome, Naples and Bari by Muhammad Abul Abbas of Sicily, [19] took place until well into the 10th century. Gradually the Aghlabids lost control of the Arab forces in Sicily and a new dynasty, the Kalbids, emerged there.

The Aghlabid kingdom reached its high point under Ahmad ibn Muhammad al-Aghlabi (856–863). Ifriqiya was a significant economic power thanks to its fertile agriculture, aided by the expansion of the Roman irrigation system. It became the focal point of trade between the Islamic world and Byzantium and Italy, especially the lucrative slave trade. Kairuan (Kairouan) became the most important centre of learning in the Maghreb, most notably in the fields of theology and law, and a gathering place for poets. The Aghlabid emirs also sponsored building projects, notably the rebuilding of the Mosque of Uqba and the kingdom developed an architectural style which combined Abbasid and Byzantine architecture. [20]

Decline of the Aghlabids

The decline of the dynasty began under Ibrahim II ibn Ahmad (875–902). An attack by the Tulunids of Egypt had to be repelled and a revolt of the Berbers put down with much loss of life. In addition, in 893 there began amongst the Kutama Berbers the movement of the Shia Fatimids to overthrow the Aghlabids. Abdullah al-Mahdi Billah captured the cities of Qairawan and Raqqada and took an oath of allegiance from the people. By 909, the Aghlabid Dynasty was overthrown and replaced with the Fatimids. [21]

Year 902 (CMII) was a common year starting on Friday of the Julian calendar.

The Fatimid Caliphate was an Ismaili Shia caliphate of the 10th to the 12th centuries CE. Spanning a large area of North Africa, it ranged from the Red Sea in the east to the Atlantic Ocean in the west. The Fatimids, a dynasty of Arab origin, trace their ancestry to the Prophet’s daughter Fatima and her husband ‘Ali b. Abi Talib, the first Shi‘ite imam. The Fatimids were acknowledged as the rightful imams by different Isma‘ili communities, but also in many other Muslim lands, including Persia and the adjacent regions. Originating during the Abbasid Caliphate, the Fatimids conquered Tunisia and established the city of "Al Mahdia". The Shiʿite dynasty ruled territories across the Mediterranean coast of Africa and ultimately made Egypt the center of the caliphate. At its height, the caliphate included – in addition to Egypt – varying areas of the Maghreb, Sudan, Sicily, the Levant, and the Hijaz. 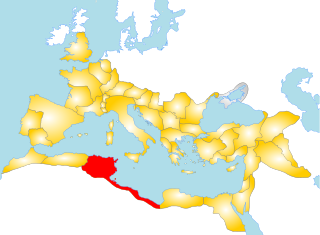 Ifriqiya, also known as el-Maghrib el-Adna, was the area during medieval history comprising the eastern part of the Constantinois, Tunis and Tripolitania — all part of what had previously been included in the Africa Province of the Roman Empire.

Banū Tamīm or Banī Tamīm is one of the tribes of Arabia, mainly present in Saudi Arabia, Qatar, Jordan, Iraq, a strongly presence in Algeria Iran as well as many other parts of the Arab world and a small community in South Asia. The word Tamim in Arabic means strong and solid. It can also mean perfect.

The Kutama was a Berber tribe in northern Algeria classified among the Berber confederation of the Bavares. The Kutama are attested much earlier, in the form Koidamousii by the Greek geographer Ptolemy. 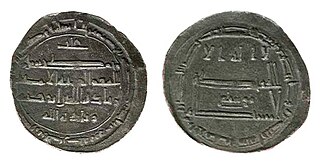 Abu Muhammad Ziyadat Allah I ibn Ibrahim ibn al-Aghlab was the Emir in Ifriqiya from 817 until his death in 838.

Ibrahim I ibn al-Aghlab was the first Emir of the Ifriqiya from Aghlabid family (800-812).

Abu Mudhar Ziyadat Allah III was the eleventh and last Emir of the Aghlabids in Ifriqiya (903–909).

Abu Ishaq Ibrahim II ibn Ahmad was the Emir of Ifriqiya. He ruled from 875 until his abdication in 902.

Al-Husayn ibn Ahmad ibn Muhammad ibn Zakariyya, better known as Abu Abdallah al-Shi'i, was an Isma'ili missionary (dāʿī) active in Yemen and North Africa, mainly among the Kutama Berbers. He was successful in converting and unifying a large part of the Kutama, leading them to the conquest of Ifriqiya in 902–909 and the overthrow of the Aghlabid dynasty. This allowed the establishment of the Fatimid Caliphate in Ifriqiya under the imam–caliph Abdullah al-Mahdi Billah, but the latter quickly fell out with Abu Abdallah, and had him executed on 28 February 911. 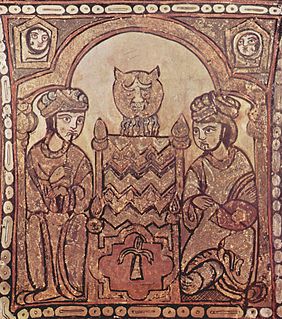 The history of Islam in Sicily and Southern Italy began with the first Arab settlement in Sicily, at Mazara, which was captured in 827. The subsequent rule of Sicily and Malta started in the 10th century. The Emirate of Sicily lasted from 831 until 1061, and controlled the whole island by 902. Though Sicily was the primary Muslim stronghold in Italy, some temporary footholds, the most substantial of which was the port city of Bari, were established on the mainland peninsula, especially in mainland Southern Italy, though Muslim raids, mainly those of Muhammad I ibn al-Aghlab, reached as far north as Naples, Rome and the northern region of Piedmont. The Muslim raids were part of a larger struggle for power in Italy and Europe, with Christian Byzantine, Frankish, Norman and local Italian forces also competing for control. Muslims were sometimes sought as allies by various Christian factions against other factions.

Abu'l-Abbas Muhammad I ibn al-Aghlab was the fifth emir of the Aghlabid dynasty, who ruled over Ifriqiya, Malta, and most of Sicily from 841 until his death. He also led the raid of Rome.

The History of early Islamic Tunisia opens with the arrival of the Arabs who brought their language and the religion of Islam, and its calendar. The Arab conquest followed strategy designed by the Umayyad Caliphate regarding its long-term conflict with the Byzantine Empire. The native Berbers eventually converted to Islam. They might have seen some similarities between themselves and the Arabs, in similar cognate culture, such as familiarity with a pastoral way of life. The first local Islamic ruling house, the Aghlabids, consisted primarily of rule by leading members of this Arab tribe. Fundamental elements of Islamic civilization were established. Although accepting Islam, many Berbers nonetheless resisted rule by the Arabs, establishing the Rustamid kingdom following the Kharijite revolt. Next in Ifriqiya (Tunisia) arose the Shia Fatimids, inspired by a few immigrants from the east yet consisting for the most part of Ifriqiya Berbers. The Fatimids later expanded their rule east, through conquest by Berber armies of Egypt, and established their caliphate there which came to include Syria and the Hejaz.

Muhammad ibn Muqatil ibn Hakim al-Akki was a provincial governor for the Abbasid Caliphate. Appointed to Ifriqiya in 797, he was the last Provincial governor of that province prior to the establishment of the Aghlabid Governor dynasty in 800.

The Sulaymanids were an Arab Muslim dynasty of Algeria, ruling from 814 to 922. Named after the founder Sulyaman I of Tlemcen, the great grandchild of Hasan ibn Ali, the Sulaymanids are brothers with the Idrisids dynasty of Morocco.

Abu Ibrahim Ahmad ibn Muhammad was the sixth Aghlabid emir of Ifriqiya, ruling from 856 to his death on 28 December 863. He succeeded his uncle, Muhammad I, and was succeeded by his brother, Ziyadat Allah II ibn Muhammad. His reign was peaceful, and mostly remembered for his public works.

Ahmad ibn Ziyadat Allah ibn Qurhub, commonly known simply as Ibn Qurhub, ruled Sicily in rebellion against the Fatimid Caliphate, from 913–916. He launched raids against the Byzantine Empire in southern Italy and against the shores of Fatimid Ifriqiya, but was deposed and handed over to the Fatimids, who executed him and his followers in July 916.

Al-Hasan ibn Ahmad ibn Abi Khinzir was a Fatimid military commander who served as the first Fatimid governor of Kairouan and of Sicily.