Agnes Mathilda Samuelson (April 14, 1887 –May 12, 1963) was an American educator and a state superintendent in public schools. She worked to provide equal education for all students in Iowa. She was posthumously inducted into the Iowa Women's Hall of Fame in 1976 and a Des Moines elementary school was named after her.

Samuelson was born on April 14, 1887 in Shenandoah, Iowa and her parents were Sven August Samuelson and Alvida (Johnson) Samuelson, who both immigrated from Sweden to the United States. She was the oldest of 7 children. Samuelson graduated from high school in 1904 with a dream to be a teacher because she had experience helping Swedish immigrants learn American customs and language. After completing an 11 month long course at the Western Normal College in Shenandoah in 1905, she started her teaching career in 1906 at a one-room schoolhouse in the country, two miles from Shenandoah. During the next two years, Samuelson taught at multiple schools in southwest Iowa, later becoming a principal and teacher at a high school in Silver City, Iowa. In 1908, her father died which made her become the main income earner in her family, making her more sensitive to the fact that male teachers received higher salaries. [1]

From 1911 to 1913, Samuelson continued her education at the University of Nebraska and later became superintendent of public schools in Yorktown, Iowa in 1913. In 1915, she successfully campaigned to become a Page County Superintendent of Schools. She provided rural schools with more new curricular education during that time, ensured that schoolbooks were available countywide, and helped advance teachers by starting summer schools and institutes. Samuelson became an extension professor of rural education in 1923 at the Iowa State Teachers College and continued to help rural children receive equal education while in that position. She attended the State University of Iowa, receiving a B. A. in 1925 and a M. A in 1928. [1]

In 1926, while Samuelson was a student and an extension professor, she ran for State Superintendent of Public Instruction and won the Republican nomination against May E. Francis. Samuelson was re-elected in 1930 and 1934. She held the position for 12 years. In 1935, she was elected as president of the National Education Association. After deciding not to run for another term as Superintendent of Public Instruction in 1938, Samuelson became the executive secretary of the Iowa State Teachers Association. She left the association in 1945 to travel to the headquarters of the National Education Association in Washington, D.C. so that she could become assistant editor of the organization's journal and to become the associate director of American Education Week. [1]

Samuelson retired in 1952 and moved back to Iowa to live in Des Moines. After her retirement, she wrote books and compiled a school manual and service for the Governor's Commission on Senior Citizens. [2]

Samuelson ensured that all Iowa children would receive equal education regardless of their property wealth in their home school district. A Des Moines elementary school was named Samuelson School in her honor. [4] [5] In 1976, Samuelson was posthumously inducted into the Iowa Women's Hall of Fame. [4]

John Ward Studebaker served as U.S. Commissioner of Education from 1934 to 1948. He was also Chairman of the U.S. Radio Education Committee. His was the longest tenure of any education commissioner, and he devoted much of his time to children's literacy and arithmetic.

Arabella Mansfield, born Belle Aurelia Babb, became the first female lawyer in the United States in 1869, admitted to the Iowa bar; she made her career as a college educator and administrator. Despite an Iowa state law restricting the bar exam to males, Mansfield had taken it and earned high scores. Shortly after her court challenge, Iowa amended its licensing statute and became the first state to accept women and minorities into its bar.

Sandy Garrett is a retired American Democratic politician from the U.S. state of Oklahoma. Garrett is the former Oklahoma Superintendent of Public Instruction.

Edna May Griffin was an American civil rights pioneer and human rights activist. Known as the "Rosa Parks of Iowa", her court battle against the Katz Drug Store in Des Moines in 1948, State of Iowa v. Katz, foreshadowed the civil rights movement and became a landmark case before the Iowa Supreme Court. 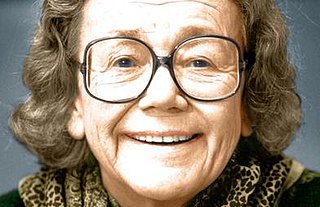 Elizabeth Morley Cowles Gale Ballantine, known as Morley Cowles Ballantine, was an American newspaper publisher, editor, philanthropist, and women's rights activist. Scion of an Iowan newspaper publishing family, she and her second husband, Arthur A. Ballantine, purchased two Durango, Colorado newspapers in 1952, which they merged into The Durango Herald by 1960. The couple also started the Ballantine Family Fund, which supported arts and education in Southwest Colorado. After her husband's death in 1975, Ballantine took over the chairmanship of the family-owned publishing company, continuing to produce a weekly column and editorials. She received many journalism awards and several honorary degrees. She was inducted into the Colorado Business Hall of Fame in 2002 and was posthumously inducted into the Colorado Women's Hall of Fame in 2014.

Celestia Josephine "Jessie" Field Shambaugh was an American educator and activist known as the "Mother of 4-H Clubs."

The National Rural Education Association (NREA) is a non-profit organization dedicated to promoting the interests of schools and educators in rural and sparsely-populated areas of the United States. The NREA is a membership organization that operates as a tax-exempt, non-profit entity. It is directed by an elected executive committee consisting of national representatives of rural school administrators, rural school teachers, state education agencies, educational service agencies, higher education, rural district school boards, and at-large constituencies. The NREA has approximately 8,000 voting and non-voting members from all 50 states.

Phebe W. Sudlow was a pioneer for women in the education field and was the first female superintendent of a public school in the United States. Sudlow also became the first female professor at the University of Iowa in 1878, despite having no formal college degree.

Agnes Ellen Harris was an American educator. She worked in education in Georgia, Florida, Texas, Washington, D.C. and Alabama, establishing Home Economics programs throughout the area. She was instrumental in founding "Tomato Clubs" in Florida, which were the precursor to the 4-H Youth Programs. She was one of the earliest practitioners of the field of Domestic Science and taught nutrition and health to women for fifty years. She was a charter member of the American Home Economics Association and served as a national officer in the 1920s. She was inducted into the Alabama Women's Hall of Fame in 1972.

Gwendolyn Wilson Fowler was an African-American pharmacist, the first black woman licensed in Iowa. She also became the first African-American woman from Iowa to serve in the United States Foreign Service, when she was posted to Vietnam in the 1950s. She was inducted into the Iowa Women's Hall of Fame in 1987.

Clara Conway was an American teacher and political activist. She founded the Clara Conway Institute for Girls in Memphis, Tennessee and was a founding member of the Nineteenth Century Club in 1890.

Lottie Estelle Granger was an American educator and school officer from the U.S. state of Ohio. She served as county superintendent of public schools of Page County, Iowa, and was the second woman elected president of the Iowa State Teachers' Association.

Evelyne Jobe Villines was an American disability rights advocate and political activist who had Poliomyelitis. Villines worked for both the state of Iowa and the federal government as an advocate. The Des Moines Register called her a "nationally known spokeswoman for the disabled" in 1992. 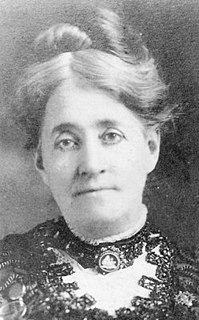 Cora Bussey Hillis was a child welfare advocate. Her work advanced children's health care, education, and the juvenile justice system in Iowa. She was admitted into the Iowa Women's Hall of Fame in 1976.

Farragut Community School District was a school district headquartered in Farragut, Iowa. Its territory included the communities of Farragut, Imogene, and Riverton. The district, from 2011 to 2016, also served secondary school students residing in Hamburg. The state of Iowa forced the district to close effective 2016.

Annie Nowlin Savery was an American suffragist and philanthropist based in Des Moines, Iowa. She is known as a pioneer feminist and activist for woman suffrage. She began taking part in the woman suffrage movement in the 1860s, and became a leader in the county and state, speaking widely and helping establish organizations to support it.

Anna Lalor Burdick ) was an Iowan educator and special agent for the U.S. Department of Education who advocated for vocational education for women. Her work is honored and continued by the Lalor Foundation and Burdick Career High School in Washington, D.C.

Mildred Hope Fisher Wood was an American teacher and a pioneer in special education. Wood was also an author and newspaper column writer. She received multiple honors.