Agorism is a social philosophy that advocates creating a society in which all relations between people are voluntary exchanges by means of counter-economics, engaging with aspects of peaceful revolution. It was first proposed by American libertarian philosopher Samuel Edward Konkin III (1947–2004) at two conferences, CounterCon I in October 1974 and CounterCon II in May 1975.

The term was coined by Samuel Edward Konkin III and comes from the word agora (Ancient Greek : ἀγορά), referring to an open place for assembly and market in a polis (Ancient Greek : πόλις; city-state). [1]

In the 1960–1970s, there was an abundance of political alienation in the United States, particularly for those in favor of libertarian ideologies. Whereas Murray Rothbard chose to create political alliances between the Old Right and the New Left, Robert LeFevre and his West Coast followers pursued a non-participatory form of civil disobedience. [2]

Ultimately, LeFevre's anti-collaboration methods lost favor and faded away. After the creation of the Libertarian Party in 1971, the debate shifted from anarchy vs. minarchism to partyarchy vs. agorism. [2]

The goal of agorism is the agora. The society of the open marketplace as near to untainted by theft, assault, and fraud as can be humanly attained is as close to a free society as can be achieved. And a free society is the only one in which each and every one of us can satisfy his or her subjective values without crushing others' values by violence and coercion.

Konkin characterized agorism as a form of left-libertarianism [4] [5] and generally that agorism is a strategic branch of left-wing market anarchism. [3] Although this term is non-standard usage, agorists identify as part of left-wing politics in the general sense and use the term left-libertarian as defined by Roderick T. Long, i.e. as "an integration, or I'd argue, a reintegration of libertarianism with concerns that are traditionally thought of as being concerns of the left. That includes concerns for worker empowerment, worry about plutocracy, concerns about feminism and various kinds of social equality". [6]

The concept of counter-economics is the most critical element of agorism. It can be described as such:

Agorism believes gradual withdrawal of state support through what Konkin described as "Profitable Civil Disobedience". [2] Starving the state of its revenue and purpose by transferring these responsibilities over to decentralized institutions is the most feasible way to achieve free markets according to agorism:

Rather than slowly amass votes until some critical mass would allow state retreat (if the new statists did not change sides to protect their new vested interests), one could commit civil disobedience profitably, dodging taxes and regulations, having lower costs and (potentially) greater efficiency than one's statist competitors – if any. [2]

Agorism does not support political engagement in the form of political party promotion as a means to transition to a free-market anarchism. The methods of the Libertarian Party are not compatible with agorist principles. Konkin referred to these attempts to fight for free markets through state approved channels of operation as "partyarchy":

As with voluntaryists, agorists typically oppose electoral voting and political reform and instead they stress the importance of alternative strategies outside political systems to achieve a free society. Agorists claim that such a society could be freed more readily by employing methods such as education, direct action, alternative currencies, entrepreneurship, self sufficiency, civil disobedience and counter-economics. [8]

Konkin claimed that while agorists see these three classes differently, anarcho-capitalists tend to conflate the first and second types while "Marxoids and cruder collectivists" conflate all three. [4]

The agorists prefer the term "free market" to "capitalism", mostly because it bears no ties to the implications the latter term has in history. The term "capitalism" originally referred to mercantilism, the use of public chartering and corporations to let the political class dominate and plunder important industries. It was first used by Louis Blanc in Organisation du Travail (1851), later in 1861 by anarchist Pierre Proudhon and notably making it popular in 1867 by Karl Marx in a more specific sense to refer to control of industry by the political class. It only later came to be conflated with actual free markets. The favoritism of the government towards determined corporations is seen by agorists as the characteristic that renders much more illegitimate the intervention of the state in various sectors. According to agorists, state-imposed restrictions in favor of certain companies distort the market, making the aforementioned businesses less responsible and less capable. The agorists claim that the debts of businesses cannot be cleared through a government's decree and that every manager has to be responsible for every act taken.

Konkin opposed the concept of intellectual property and wrote in an article entitled "Copywrongs" in support of such a thesis. [9] J. Neil Schulman criticized this thesis in "Informational Property: Logorights". [10] Whereas Konkin was opposed to the laws of the state in the cases of patents and copyright, seen as creators of monopolies and distortion, Schulman agreed with Konkin that the state could not be a foundation for any class of rightful property yet sought to demonstrate that exclusive ownership rights could apply to what he ultimately termed "Media Carried Property"—created objects that exist independent of the subjective human mind yet are not themselves made of atoms or molecules. [11]

Konkin's treatise New Libertarian Manifesto was published in 1980. [8] Previously, the philosophy had been presented in J. Neil Schulman's science fiction novel Alongside Night in 1979. Ayn Rand's example, presenting her ideas in the form of a work of fiction in Atlas Shrugged , had inspired Schulman to do likewise. Konkin's afterword to the novel, "How Far Alongside Night?", credited Schulman with integrating the "science of counter-economics" with Konkin's basic economic philosophy. [12]

The libertarian perspective on immigration is often regarded as one of the core concepts of libertarian theory and philosophy. Some libertarians assert that "[e]fforts by the government to manage the labor market are as apt to fail as similar efforts to protect domestic industries or orchestrate industrial policy. [...] If an immigrant seeks to engage in peaceful, voluntary transactions that do not threaten the freedom or security of the native-born, the government should not interfere".

Victor Koman is an American science fiction and fantasy writer and agorist. A three-time winner of the Prometheus Award, Koman is mainly popular in the libertarian community. He is the owner of the publishing house KoPubCo. His Ph.D. in Information Technology was conferred by Capella University in 2016. He also possesses a BSIS from University of Redlands (2001) and an MBA from Pepperdine University (2004).

A night-watchman state is a model of a state that is limited and minimal, whose only functions are to act as an enforcer of the non-aggression principle by providing its citizens with the military, the police and courts, thereby protecting them from aggression, theft, breach of contract, fraud and enforcing property laws. Its proponents are called minarchists.

Samuel Edward Konkin III, also known as SEK3, was an American libertarian philospher. As the author of the publication New Libertarian Manifesto, he was a proponent of a political philosophy which he named agorism.

Economic secession has been variously defined by sources. In its narrowest sense, it is abstention from the state’s economic system – for instance by replacing the use of government money with barter, Local Exchange Trading Systems, or commodity money. Wendell Berry may have coined the term "economic secession." He promoted his own version in his 1991 essay Conservation and Local Economy. John T. Kennedy used the term to refer to all human action that is forbidden by the State; he explains economic secession as tax avoidance or refusal to follow regulations as a method to reduce government control. 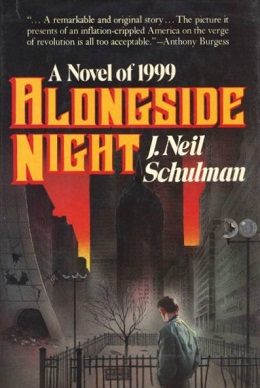 Alongside Night is a dystopian novel by science fiction writer J. Neil Schulman intended to articulate the principles of Agorism, a political philosophy created by Samuel Edward Konkin III, to whom Schulman dedicated the work. It was first published during 1979 by Crown Publishers, with subsequent paperback editions released by Ace Books during 1982, Avon Books during 1987, Pulpless.com during 1999, and Amazon Kindle during 2009.

Counter-economics is an economic theory and revolutionary method consisting of direct action carried out through the black market or the gray market. As a term, it was originally used by American libertarian activists and theorists Samuel Edward Konkin III and J. Neil Schulman. The former defined it as the study or practice "of all peaceful human action which is forbidden by the State".

LPRadicals is a caucus formed in 2006 within the United States Libertarian Party by Susan Hogarth and other party members who opposed removal of much of the material in the party platform during the 2006 national party convention. The caucus lists four points as "key strategic principles in furthering the work of the Libertarian Party toward, as our platform describes it, 'a world set free in our lifetime'." These are: Rights Are Utilitarian, Radical Abolitionism, Principled Populism, and No Particular Order. The caucus was active at the 2008 and 2010 Libertarian National Conventions. The radical caucus was revived and was extraordinarily active during the 2016 Libertarian National Convention.

This article is a list of major figures in the theory of libertarianism, a philosophy asserting that individuals have a right to be free. Originally coined by French anarchist and libertarian communist Joseph Déjacque as an alternative synonymous to anarchism, American classical liberals decided to appropriate the term in the 1950s for their philosophy which asserts that individuals have a right to acquire, keep and exchange their holdings and that the primary purpose of government is to protect these rights.

The following outline is provided as an overview of and topical guide to anarchism, generally defined as the political philosophy which holds the state to be undesirable, unnecessary and harmful, or alternatively as opposing authority and hierarchical organization in the conduct of human relations. Proponents of anarchism, known as anarchists, advocate stateless societies or non-hierarchical voluntary associations.

Libertarian anarchism may refer to:

New Libertarian Manifesto is a libertarian philosophical treatise by Samuel Edward Konkin III. It is the first explanation of agorism, a philosophy created by Konkin. Konkin proffers various arguments of how a free society would function as well as examples of existing gray and black markets. It contains criticisms of using political or violent means and advocates non-politics with non-voting as a strategy. Finally, Konkin describes the steps of using the black market to dismantle the state, a strategy known as counter-economics.

Anti-statism is any approach to social, economic or political philosophy that rejects statism. An anti-statist is one who opposes intervention by the state into personal, social and economic affairs. In anarchism, this is characterized by a complete rejection of all hierarchical rulership.