Eringen studied at the Technical University of Istanbul and graduated with a diploma degree in 1943 and then worked for the Turkish Aircraft Co. until 1944. In 1944/45, he was a trainee at the Glenn L. Martin Company and in 1945 was group leader at the Turkish Air League Company. He continued his studies at the Polytechnic Institute of Brooklyn in New York City where he received his doctorate in applied mechanics in 1948 [11] under the supervision of Nicholas J. Hoff. [12]

His work deals with continuum mechanics, electrodynamics of continua and material theories.

In 1981 he received an honorary doctorate from the University of Glasgow (D. Sc.). In 1973 he received the Distinguished Service Award and the 1976 as named in his honor A. C. Eringen Medal of the Society of Engineering Science, whose president he was in 1963 to 1973. [8]

L[eo] Stanley Crane was a railroad executive who served as CEO of Southern Railway. Trained as a chemical engineer, Crane was elected to the National Academy of Engineering in 1978. After retiring from Southern Railway, he worked for Conrail where he later endowed the L. Stanley Crane Chair of engineering in applied sciences at his alma mater, George Washington University.

Solid mechanics, also known as mechanics of solids, is the branch of continuum mechanics that studies the behavior of solid materials, especially their motion and deformation under the action of forces, temperature changes, phase changes, and other external or internal agents. 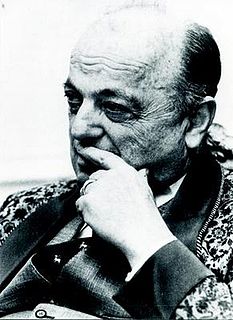 Attila Aşkar is a Turkish civil engineer, scientist and former president of the Koç University in Rumelifeneri, Istanbul, Turkey during 2001 and 2009.

Bernard Budiansky was a renowned scholar in the field of applied mechanics, and made seminal contributions to the mechanics of structures and mechanics of materials. He was a recipient of the Timoshenko Medal.

Warner Tjardus Koiter was an influential mechanical engineer and the Professor of Applied Mechanics at Delft University of Technology in the Netherlands from 1949 to 1979.

Paul Mansour Naghdi was a professor of mechanical engineering at University of California, Berkeley. 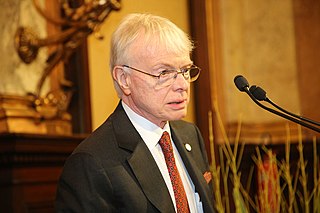 Thomas Joseph Robert Hughes is a Professor of Aerospace Engineering and Engineering Mechanics and currently holds the Computational and Applied Mathematics Chair III at the Oden Institute at The University of Texas at Austin. Hughes has been listed as an ISI Highly Cited Author in Engineering by the ISI Web of Knowledge, Thomson Scientific Company.

Mark Jay Ablowitz is a professor in the department of Applied Mathematics at the University of Colorado at Boulder, Colorado. He was born in New York City.

Morton E. Gurtin is a mechanical engineer who became a mathematician and mathematical physicist. He is an emeritus professor of mathematical sciences at Carnegie-Mellon University, where for many years he held an endowed chair as the Alumni Professor of Mathematical Science. His main work is in materials science, in the form of the mathematical, rational mechanics of non-linear continuum mechanics and thermodynamics, in the style of Clifford Truesdell and Walter Noll, a field also known under the combined name of continuum thermomechanics. He has published over 250 papers, many among them in Archive for Rational Mechanics and Analysis, as well as a number of books.

Erdoğan is a Turkish name meaning "who is born as a brave man, soldier or warrior", "brave, warrior hawk", or "fighter". Erdogan has about the same connotations as the name Eugene used by many European cultures. Notable people with the name include:

Gérard A. Maugin was a French engineering scientist. Maugin acquired his engineering degree in mechanical engineering in 1966 at the Ecole Nationale Supérieure d'Arts et Métiers (Ensam) and he continued his studies at the school of aeronautics Sup Aéro in Paris until 1968. In 1966 he worked for the French Ministry of Defence on ballistic missiles. In 1968 he received his (DEA) degree in hydrodynamics in Paris. In 1969, he earned his master's degree from Princeton University, where he graduated in 1971 (Ph.D.). He was a NASA International Fellow between 1968 and 1970. In 1971/72 he was an officer in the French Air Force. In 1975 he received his doctorate in mathematics at the University of Paris VI, where he also taught and directed a team at the Laboratoire de Mécanique Théorique conducting research since 1985 on Continuum mechanics and Theoretical Mechanics. After its name change to the Laboratoire de Modélisation en Mécanique (LMM), he headed this from 1998. From 1979 he was Director of Research at CNRS.

Johannes Ferdinand "Hans" Besseling was professor emeritus of Engineering Mechanics at the Delft University of Technology, worked in the field of the application of solid mechanics to the analysis of structures; constitutive equations for the mathematical description of material behaviour. His specialities are finite element methods, continuum thermodynamics, creep and plasticity of metals.

Martin Ostoja-Starzewski is a professor of mechanical science and engineering at the University of Illinois at Urbana-Champaign. He received his undergraduate education at Cracow University of Technology, followed by Master’s and Ph.D. degrees at McGill University. Ostoja-Starzewski's work focuses on the mechanics/physics of random and fractal media, having made seminal contributions in scaling to representative elementary volume in linear and nonlinear material systems, formulation of a universal elastic anisotropy index, elastodynamics, tensor random fields, and bridging continuum mechanics to spontaneous violations of the second law of thermodynamics. He has over 200 journal papers, 5 (co-)authored, co-edited books, and has given over 200 invited/keynote lectures and seminars.