He is the fourth and youngest son of the late ruler, Rashid bin Saeed Al Maktoum (1912-1990) and the youngest brother of the Vice President and Prime Minister of the United Arab Emirates, and Ruler of Dubai Mohammed bin Rashid Al Maktoum

Sheikh Ahmed graduated from the Royal Military Academy Sandhurst and joined the Central Military Command in Dubai and became its Commander in Chief, developing it into one of the leading military bases in the United Arab Emirates.

Sheikh Ahmed's business interests include the Dubai Real Estate Centre (DREC) established in 1991 with more than 3200 units across the residential, commercial, retail and industrial real estate segments in Dubai under its management and operation.

In 2019, Sheikh Ahmed consolidated his assets under A.R.M. Holding, one of the biggest investment companies in Dubai mandated with supporting the Emirate of Dubai's growth. The conglomerate holds in addition to Dubai Real Estate Centre, Huna and Hive Coliv and equity stakes in private and publicly listed companies in a variety of sectors globally including Education, F&B, Real Estate, Banking, Telecommunications and Hospitality.

Sheikh Ahmed founded in 1960 Al Wasl Sports Club, [1] which he also chairs, and one of the most popular football leagues in the UAE, Al Wasl Football Club. Both clubs are the recipients of numerous titles and have a sizeable following.

He is one of the main figures responsible for the creation and launch of Dubai International Marine Club and was its first Chairman in 1988. The Club is the first in the Middle East and Africa to be a member in UIM.

Sheikh Ahmed is an avid horseman and created the Jebel Ali Racecourse [2] to promote horse racing in the UAE and launched Al Adiyat and Dubai Horse Racing Centre in support of the industry. He and his team helped develop the handicapping system and other rules of racing.

He claimed his first win in 1982 when his first horse, Wassl, won the Irish 2000 Guineas and the Craven Stakes. [3] Other horses owned by Sheikh Ahmed have won the 1000 Guineas, Irish Oaks, Irish St Lager, Dewhurst Stakes, Gold Cup, Dubai Golden Shaheen, UAE 2000 Guineas, Italian Derby, Prince of Wales Stakes, Coral Eclipse Stakes Pretty Polly stakes and King George VI and Queen Elizabeth Stakes in Australia. Mtoto, Sheikh Ahmed's most celebrated stallion, won seven out of ten races throughout his racing career that lasted between 1985 and 1988, most notable of which were the King George VI and Queen Elizabeth Stakes in 1988. 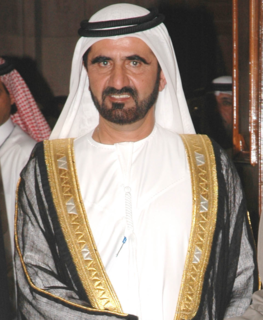 Sheikh Mohammed bin Rashid Al Maktoum is the Vice President and Prime Minister of the United Arab Emirates (UAE), and ruler of the Emirate of Dubai. Since his accession in 2006, after the death of his brother Sheikh Maktoum, he has undertaken reforms in the UAE's government, starting with the UAE Federal Government Strategy in April 2007.

Sheikh Rashid bin Saeed Al Maktoum was the vice-president and second prime minister of the United Arab Emirates and ruler of the Emirate of Dubai. He ruled the emirate for 32 years from 1958 until his death in 1990.

Sheikh Ahmed bin Saeed Al Maktoum is president of the Dubai Civil Aviation Authority, CEO and founder of the Emirates Group, chairman of Dubai World, and Noor Takaful insurance company. He is the current chancellor of the Middle East's first research-based postgraduate university The British University in Dubai, chairman of the Dubai Supreme Fiscal Committee, and second vice chairman of the Dubai Executive Council. A billionaire member of Dubai's ruling Al Maktoum family, he is believed to be one of the world's wealthiest royals. 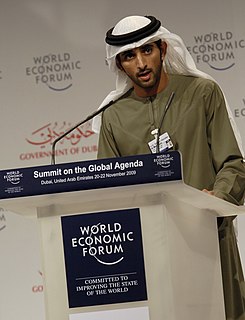 Sheikh Hamdan bin Mohammed bin Rashid Al Maktoum is the Crown Prince of Dubai, United Arab Emirates. He is popularly known as Fazza, the name under which he publishes his poetry, and which means "the one who helps" in Arabic. 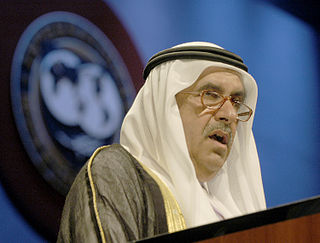 The House of Al Falasi is both a name of a tribe and a name of its Al Maktoum branch.

Mina Seyahi refers to an area in the city of Dubai, UAE. The literal meaning of the phrase "Al Mina Al Seyahi" is "Port of Travellers". The Mina Seyahi area covers a part of Jumeirah Beach and includes the Dubai International Marine Club (formed in 1986, including a 291-berth marina. 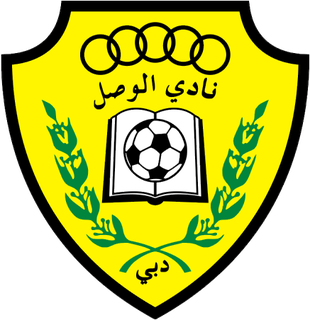 Al Wasl Football Club is an Emirati professional football club based in Dubai, that competes in the United Arab Emirates Football League. It is a part of the multi-sports club Al Wasl SC. Argentina-legend Diego Maradona was the manager of the club in 2011 and 2012. The club has a supporters group, named as the Ultras Junoon.

Ahmed Sultan Bin Sulayem is the Executive Chairman of DMCC, the free zone authority in Jumeirah Lakes Towers (JLT) and established in 2002 by the Government of Dubai to provide the physical, market and financial infrastructure required to establish the emirate as a hub for global commodities trade. He is the son of Sultan Ahmed bin Sulayem. As of September 2018, DMCC had over 15,000 registered members operating within its free zone including commodities, businesses as well as other sectors. In 2018, Bin Sulayem completed 17 years with DMCC.

Qadhi Saeed Almurooshid, born 16 January 1971, is an Emirati businessman and a former member of the Government of Dubai. He currently serves as a member of several Dubai boards and as chairman of Al Murooshid Investment LLC.

Shabab Al-Ahli Club is a United Arab Emirates professional association football club based in Dubai, that currently plays in the UAE Arabian Gulf League. Al-Ahli is one of the most successful clubs in the UAE.