The Aiguilles d’Arves (3,514 metres (11,529 ft)) is a mountain in the Arves massif in the French Alps. The mountain, comprising three separate peaks (in French Aiguille), is the highest point of the massif, and is located in the department of Savoie.

The summits that make up the Aiguilles d'Arves are described in the following table.

The central peak of the Aiguilles d’Arves was first climbed by the brothers Pierre Alexis and Benoît Nicolas Magnin, from nearby Saint-Michel-de-Maurienne, on 2 September 1839. As evidence they built a cairn and left two Sardinian coins under a rock on the summit. [2]

The southern summit was first climbed by the Swiss mountain guides Christian and Ulrich Almer and their American client, W. A. B. Coolidge from New York. During the 1870s and 1880s, Coolidge claimed a number of first ascents and worked extensively in the Dauphiné Alps. Earlier, the same party had climbed L’Auguille Centrale in 1874. On the summit, they found the cairn built by the Magnin brothers, but ascribed it to "a legendary chamois hunter". The day after their ascent of L’Aiguille Meridionale in 1878, Benoît Magnin informed them about his ascent 39 years prior. [2]

Mont Blanc ; both meaning "white mountain") is the second-highest mountain in Europe after Mount Elbrus. It is the highest mountain in the Alps, rising 4,808 m (15,774 ft) above sea level. It is the eleventh-most prominent peak in the world. The mountain stands in a range called the Graian Alps, between the regions of Aosta Valley, Italy, and Savoie and Haute-Savoie, France. The location of the summit is on the watershed line between the valleys of Ferret and Veny in Italy and the valleys of Montjoie, and Arve in France, on the border between the two countries. 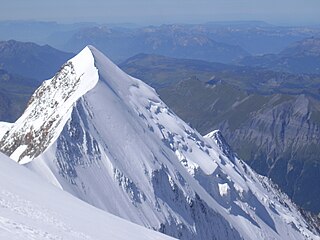 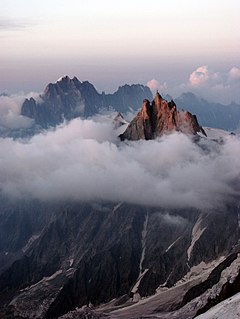 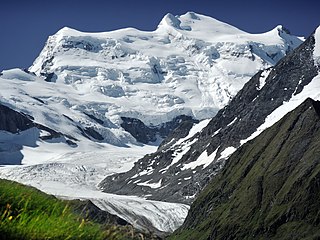 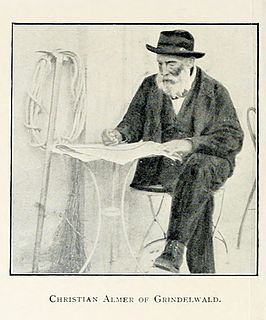 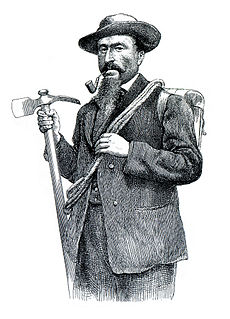 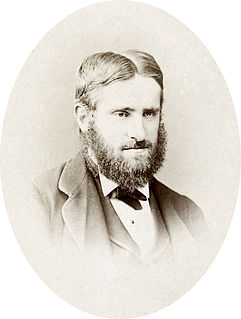 The Aiguille du Chardonnet is a mountain in the Mont Blanc massif in Haute-Savoie, France. It lies between the Glacier du Tour and the Argentière Glacier. The border with Switzerland runs just east of the summit. The East or Forbes Arete provides a popular and classic mountaineering route to the summit. 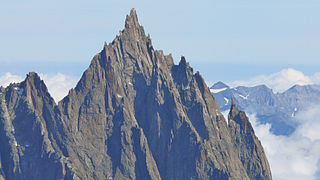 The Aiguille du Grépon, informally known as The Grepon, is a mountain in the Mont Blanc Massif in Haute-Savoie, France. The Grepon has a Southern and Northern peak, which are the highest points of a sharp granite ridge to the east of the Glacier des Nantillons above Chamonix and northeast of the Aiguille du Midi. A madonna statue is situated on the Southern peak.

The Aiguille de Rochefort is a mountain in the Mont Blanc massif in France and Italy. The peak lies on the Rochefort arête between the Dent du Géant and the Grandes Jorasses and is usually climbed during a traverse of the ridge.

Aiguille de Chambeyron (3,412m) is a mountain of the Cottian Alps and is the highest mountain of Alpes-de-Haute-Provence in southeast France. Together with its neighbour Brec de Chambeyron, it is the dominant peak of the upper Ubaye Valley. The mountain is located near the border with Italy, just west of the Main chain of the Alps. It is the culminating point of the Massif du Chambeyron and is also the highest peak in the Alps south of Monte Viso.