The airline was set up by Craig and Marion Emeny in 1984, and facilitates the transportation of both freight and people to and from mainland New Zealand. [5]

Craig Emeny first moved to the Chatham Islands as a pilot to operate services primarily between Chatham and Pitt Islands. At that time the lack of regularity in flights to mainland New Zealand saw him start his own airline and begin operations to mainland airports. [6] Air Chathams had the advantage of being based on the Chatham Islands and were able to avoid many of the weather related issues that other airlines had operating to the Chathams. As the freight and passenger market developed Air Chathams grew from operating small piston engine aircraft to large 50 seat two engine turbo-prop aircraft. [7]

In 2014 Air Chathams established a flight operations and maintenance base at Auckland International Airport. From this base the company provides maintenance services both internally and to third party airlines under contract. A fully owned subsidiary (Chathams Pacific) operated scheduled flights in Tonga until March 2013. The introduction of Chinese (PRC) aid financed aircraft and training facilities at the request of the Tongan government introduced competition to Chathams Pacific's routes. [8] Air Chathams' management decided not to compete with the new airline, Real Tonga, and ceased all Tongan operations. [9] With the Air New Zealand regional route cut backs, Air Chathams began serving the Auckland to Whakatāne route on 29 April 2015, [10] Auckland to Whanganui on 31 July 2016 [11] and Auckland to Kapiti Coast from 20 August 2018. [12]

In mid 2018, the airline announced that it was looking to re-establish flights between Auckland and Norfolk Island. [13] Air Chathams in April 2019 announced they will be taking over a fourth Air NZ route by starting a weekly service from Auckland to Norfolk Island on 6 September 2019. [14]

This is a list of destinations served by Air Chathams, excluding subsidiaries. [15]

This is a list of destinations formerly served by Chathams Pacific, a wholly owned subsidiary of Air Chathams that operated between 2007 and 2013.

As of January 2019, the Air Chathams fleet includes the following aircraft: [18]

The Convair 580s, Saabs and Metroliners are used across the company's operations as well as contract freight services and charter work. The Cessna 206 provides a non-regular service between Chatham Island and Pitt Island and is on standby for search and rescue or local flights around the Chatham Islands. [21] The airline's Aero Commander 690 has been wet-leased out for aerial mapping and survey duties, [22] while the DC-3 is often chartered out for scenic flights and tours in a retro NAC livery. [23] 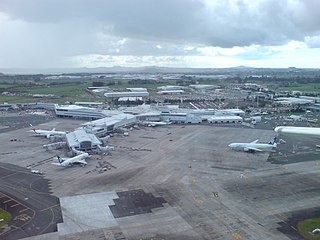 Auckland Airport is the largest and busiest airport in New Zealand, with over 21 million passengers in the year ended March 2019. The airport is located near Mangere, a residential suburb, and Airport Oaks, a service hub suburb 21 kilometres (13 mi) south of the Auckland city centre. It is both a domestic and international hub for Air New Zealand, and the New Zealand hub of Jetstar Airways.

New Zealand National Airways Corporation, popularly known as NAC, was the national domestic airline of New Zealand from 1947 until 1978 when it amalgamated with New Zealand's international airline, Air New Zealand. The airline was headquartered in Wellington. 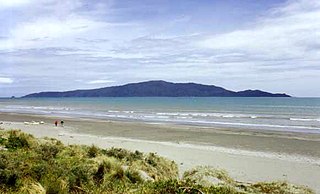 The Kapiti Coast is the name of the section of the coast of the south-western North Island of New Zealand that is north of Wellington and opposite Kapiti Island. It falls under the jurisdiction of the Wellington Regional Council. About 5/6 of it is considered suburbs of Wellington.

Paraparaumu is a town in the south-western North Island of New Zealand. It lies on the Kapiti Coast, 55 kilometres (34 mi) north of the nation's capital city, Wellington.

Whangarei Airport is a small airport 4 nautical miles to the south east of Whangarei city, in the suburb of Onerahi, on the east coast of Northland in the North Island of New Zealand. The airport has a single terminal with two gates.

Air Nelson was a regional airline based in Nelson, New Zealand. It was founded as an independent airline in 1979. Air New Zealand took a 50% shareholding in 1988 and 100% ownership in 1995. Air Nelson operated services on provincial routes under the Air New Zealand Link brand.

air2there was an airline based in New Zealand. It began service in 2004, and was based at Kapiti Coast Airport, 60 km north of Wellington. It operated scheduled services across Cook Strait. Charter services to other New Zealand destinations were also available. Aero-medical flights were conducted from Wellington Airport using twin turbo prop aircraft. As of November 2018, air2there has not flown since June, and applications to liquidate the airline have been filed. The airline's Cessna Grand Caravan is up for sale

Sounds Air is a New Zealand airline based at Picton. The airline was founded in 1986 by Cliff and Diane Marchant to provide low cost flights to the Marlborough Sounds. The airline has a maintenance facility at the Feilding aerodrome 9 miles northwest of Palmerston North as well as Omaka aerodrome with its Sounds Aero Maintenance division based there.

Kaitaia Airport is an airport located in Kaitaia, in the Northland Region of New Zealand. It is 320 km from Auckland. Barrier Air operates daily flights to and from Auckland Airport. 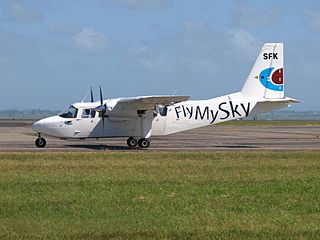 Kapiti Coast Airport, earlier called Paraparaumu Airport, is on the Kapiti Coast of New Zealand's North Island, between the Wellington dormitory suburbs of Paraparaumu Beach, Paraparaumu to the east, and Raumati Beach to the south. The Wharemauku Stream flows through part of the airport's land.

Island Air Charters is an air charter company based in Tauranga, New Zealand. The company is owned by Paul Ensor and offers charter services around the Bay of Plenty using Cessna light aircraft.

Kerikeri Airport, also known as Bay of Islands Airport, is an airport at Kerikeri, New Zealand. It is about a three-hour drive from Auckland and a 45-minute flight from Auckland Airport.

Whanganui Airport is the airport that serves Whanganui, New Zealand. It is located to the south of Whanganui River, approximately 4 km from the centre of Whanganui. The airport was opened in 1954, and services to the airport began in November that year. In September 2013, Air New Zealand announced that it would withdraw services from Whanganui to Wellington and Taupo in December 2013. Sounds Air briefly took over the Wellington route, however this was later terminated on 15 May 2015. The airport has a single terminal with just two gates. Air Chathams now operates to Wanganui from Auckland.

Whakatāne Airport is an airport serving the town of Whakatāne, New Zealand, the Eastern Bay of Plenty and the tourist attractions of Mount Tarawera and White Island.

Kiwi Regional Airlines was an airline based in Hamilton, New Zealand which operated domestic flights within New Zealand between October 2015 and July 2016. It was founded in 2014 by local businessman Ewan Wilson, who previously served as the CEO of Kiwi Travel International Airlines, and commenced operations on 27 October 2015. The airline owned and operated a single Saab 340A aircraft. The initial destinations served were Hamilton, Nelson, Dunedin and Queenstown, with flights to Queenstown being dropped in November 2015 and Tauranga being added to the network in February 2016.