Aitbaar (transl. Trust) is a 1985 Hindi film directed by Mukul Anand. It stars Raj Babbar, Dimple Kapadia, Suresh Oberoi, Danny Denzongpa, and Sharat Saxena. It was a remake of Alfred Hitchcock's 1954 thriller Dial M For Murder . It was further remade in Tamil in 1985 as Saavi and in Malayalam in 1989 as New Year .

The film's music is by Bappi Lahiri with lyrics by Hasan Kamaal and Farooq Kaiser, who gave "Kisi Nazar Ko Tera Intezar Aaj Bhi Hai", a memorable ghazal duet by Asha Bhosle and Bhupinder Singh. [1] The film was classified A by the censor board. [2]

The film opens with Jaideep meeting Vikramjit on a rainy night and inviting him to his house for drinks. During their conversation, Jaideep recounts how his wife, Neha, is having an affair with Sagar - the story is entirely a ruse to convince Vikramjit to help Jaideep in exacting revenge on his wife. On receiving refusal, Jaideep blackmails Vikramjit with a photo of him disposing off a dead body and his knowledge of various aliases maintained to peddle drugs. Vikramjit agrees for a sum of INR 1,00,000.

Jaideep reaches home and doctors the crime scene to frame Neha, who is shocked and vulnerable. The public prosecutor proves her guilt and she is sentenced to prison. However, inspector Baruah senses foul play and investigates for the truth to be revealed.

The truth being that Neha never had an affair with Sagar. Both of them were in a relationship before her marriage and reconnected after years, and became friends. Jaideep had married Neha for her wealth, and concocted the murder plan to frame Neha and gain unfettered access to her wealth.

When exposed, Jaideep kills himself and Neha is proven innocent.

Difference from the original

The film differs in some aspects Hitchcock's story - in the original story, when Tony Wendice realizes he has been found to be guilty, he accepts his crime gracefully whereas in the Hindi adaptation, Jaideep commits suicide.

The music for all the songs were composed by Bappi Lahiri.

Gardish is a 1993 Indian Bollywood action crime film written and directed by Priyadarshan, starring Jackie Shroff, Aishwarya, and Dimple Kapadia. It is a remake of the 1989 Malayalam film Kireedam. The film won two Filmfare Awards—Best Art Direction and Best Action (Thyagarajan), and was nominated for Best Actor (Shroff), Best Supporting Actor, and Best Supporting Actress (Dimple). It marks the debut of Actor Mukesh Rishi as an antagonist. Notably, this film also marks South Indian actress Aishwarya's Bollywood debut. The film was a critical and commercial success. 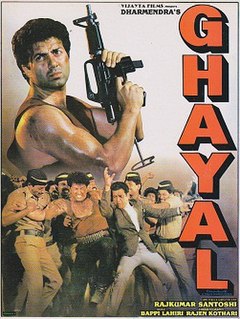 Mazdoor is a 1983 Hindi film. Produced by B. R. Chopra it is directed by his son Ravi Chopra. The film stars Dilip Kumar, Nanda, Raj Babbar, Suresh Oberoi, Rati Agnihotri, Padmini Kolhapure, Iftekhar, Madan Puri and Johnny Walker. The music of the film is by R. D. Burman. This was veteran actress Nanda's final appearance before her retirement from acting. 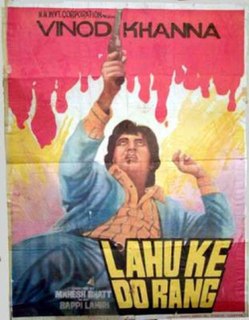 Lahu Ke Do Rang is a 1979 Hindi movie directed by Mahesh Bhatt. The film stars Vinod Khanna, Helen, Danny Denzongpa, Shabana Azmi, Ranjeet and Prema Narayan. The music and lyrics for the film are by Bappi Lahiri and Farooq Qaiser respectively. 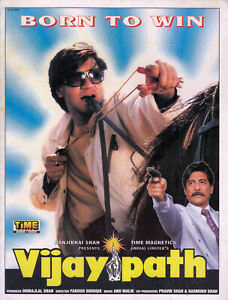 Vijaypath is a 1994 Indian Hindi action drama film starring Ajay Devgn, Tabu and Danny Denzongpa. Divya Bharti completed almost twenty percent shooting but because of her untimely death Tabu was recast as the female role. The film was one of the hits of 1994 in India mainly due to its soundtrack composed by Anu Malik, which became an instant superhit. 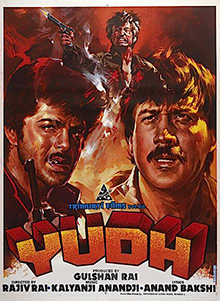 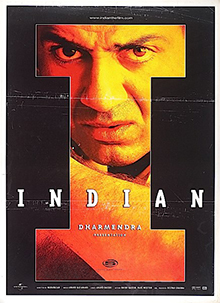 Indian is a 2001 Indian Hindi-language action thriller film directed by N. Maharajan and produced by Dharmendra. It stars Sunny Deol, and also features Shilpa Shetty, Danny Denzongpa, Raj Babbar, Mukesh Rishi and Rahul Dev in other roles. The film is a remake of the Tamil film Vallarasu and was released on 26 October 2001 with excellent box office reports, grossing a domestic nett of ₹18.0 million on its opening day. Made on a budget of ₹150 million, it was successful at the box office, earning over ₹540 million worldwide. The film tells the story of a strong, brave policeman who is falsely blamed for the mysterious murder of his father-in-law. It was the fourth highest-grossing Hindi film of the year in India with a nett gross of ₹280 million. 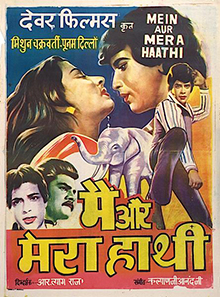 Insaaf is a 1987 Bollywood action film directed by Mukul Anand, starring Vinod Khanna, Dimple Kapadia and Suresh Oberoi. The film was remade in Tamil as Chinnappadass with Sathyaraj.

2001: Do Hazaar Ek is a Bollywood Mystery film. It was released in 1998 and stars Dimple Kapadia, Jackie Shroff, Rajat Bedi and Tabu.

Insaaf Ki Awaaz is a 1986 Bollywood action film directed by B. Gopal and produced by D. Rama Naidu under the banner of Suresh Productions. The film features Rekha, Anil Kapoor and Raj Babbar in pivotal roles. The music director of the film is Bappi Lahiri. The film was a remake of Telugu film Pratidhwani (1986), directed by B. Gopal. 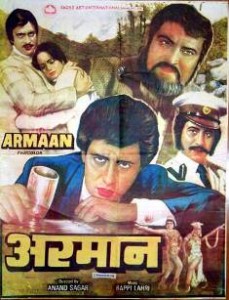 Kanoon Meri Mutthi Mein is a Hindi action drama film of Bollywood directed by K. Prasad and produced by Dara Maruti. This multi starer movie was released in 1984 under the banner of Maruti Films.