Last updated February 16, 2021
This article is about the city. For the eponymous Emirate, see Emirate of Ajman. For other uses, see Ajman (disambiguation).
City in Emirate of Ajman, United Arab Emirates

Al Bu Kharaiban Nuaimi rule in Ajman started in 1816, when Sheikh Rashid bin Humaid Al Nuaimi and fifty of his followers took the coastal settlement of Ajman from members of the Al Bu Shamis Nuaimi tribe in a short conflict. [2] It wasn't until 1816 or 1817, however, that the Ajman fort finally fell to Rashid's followers and his rule was endorsed by the powerful Sheikh of neighbouring Sharjah and Ras Al Khaimah, Sheikh Sultan bin Saqr Al Qasimi. [3]

On 8 January 1820, following the sack of Ras Al Khaimah by a British force led by Sir W.G. Keir, Sultan bin Saqr signed the General Maritime Treaty with the United Kingdom on 4 February 1820, followed on 15 March by Rashid bin Humaid [4] at Falaya Fort.

An 1822 British maritime survey noted that Ajman had one of the best backwaters on the coast and was a small town with a single fortified building, the ruler's house. In common with many other coastal towns on what became the Trucial Coast, the population was mobile depending on the season – there were as many as 1,400 to 1,700 men of the 'Mahamee' tribe living there during the pearl hunting season (April–September), many of whom would migrate to Al Buraimi in the date season. The survey notes that Ajman's ruler Rashid bin Ahmed considered his dominion independent of Emirate of Sharjah, but that Sharjah did not maintain that view even though it had no power over Ajman. [5] The survey noted that the inhabitants of Ajman were 'mostly strict Wahhabis' and recorded the presence of the ruined village of Fasht down the shore from Ajman town, which is today the Fisht suburb of Sharjah city.

In 1831, the Sheikh of Ajman accepted a subsidy from the Imam of Muscat to join with Sultan bin Saqr of Sharjah against Sohar, but following Sultan's defeat declared for Sohar.[ clarification needed ] In his absence, a part of Bani Yas from Abu Dhabi sacked Ajman town and its date groves. [6] In retaliation, the forces of Ajman committed 'daring depredations' upon the cities of Sohar and Muscat. When called upon to provide redress for the actions of his 'subject', Sultan bin Saqr disavowed any authority over Ajman and in 1832 a British naval force was sent to Ajman to obtain redress for the raids on the East Coast cities. [7] Ending a conflict between Sharjah, Ajman and Dubai on the one hand and Abu Dhabi on the other, Ajman (together with the other parties) signed the 1835 Maritime Treaty in its own right. [7]

In 1840, Humaid bin Obeid bin Subt of Al Heera invaded Ajman supported by a body of the Bani Naeem. Although initially reluctant to assist Humeid bin Rashid, Sultan bin Suggur of Sharjah sent his son Suggur who, together with Maktoum of Dubai, ejected the invaders and sacked Al Heera in reprisal.

In 1843 a further Maritime Treaty was signed between the Trucial Sheikhs and the British and then, on 4 May 1853, 'A Perpetual Treaty of Peace' was entered into by the coastal Sheikhs, including Ajman. A copy of this treaty is on display in Ajman Museum. A further treaty of 1892 bound the Trucial States to Britain.

By the 20th century, J. G. Lorimer's survey of the coast of the Trucial States showed Ajman to be a small town of some 750 inhabitants (in comparison, the population of Dubai at the time numbered over 10,000). [8] On 2 December 1971, Ajman, under Sheikh Rashid bin Humayd Al Nuaimi, joined the United Arab Emirates.

The city has more than 90% of the population of the emirate. The area runs directly into the city of Sharjah along the coast to the south-west, which in turn is adjacent to Dubai, forming a continuous urban area.

With capacity to accommodate 1500 companies and serving over 1,000 vessels a year, Ajman Port and Ajman Free Zone are major contributors to the emirate's economy. Exporting to over 65 countries, the Free Zone's companies make up approximately 20% of the UAE's overall industrial units, with some 256 industrial companies operating from the zone. [9]

Ajman is continuing the development stalled by the financial crisis of 2007–2008 and once again undergoing a period of growth. It has immensely grown throughout the years, with recent investments from foreign companies and installations and renovations of it’s tourist attractions, hotels and commercial sites. Tourist attractions in the emirate are growing rapidly. They include the Ajman Beach, Ajman National Museum situated at Ajman Fort, the Red Fort and the museum in the inland enclave of Manama. City Centre Ajman, the Emirate’s biggest mall, is a big attraction as well for it’s unique architectural experience and variety of shops and confectionaries.

Ajman's corniche is a popular evening and weekend destination for families and features a number of fast food outlets, coffee shops and stalls. It is home to the 'Outside Inn', a popular watering hole with expatriates, as well as to a number of hotels, including the Ramada, Ajman Palace, Ajman Hotel, the Ajman Saray and Fairmont Ajman.

Ajman's newly developed Al Zorah area is also getting a lot of tourist attention. It has multiple activities for all ages ranging from bouncy castles to kayaking in the mangroves. [10]

The natural port (or khor) of Ajman is located along a natural creek which penetrates the town. [11] Ajman is also home to Arab Heavy Industries, one of the world's largest ship manufacturing firms. [12]

Sheikh Sultan bin Saqr Al Qasimi (1781–1866) was the Sheikh of the Al Qasimi and ruler variously of the towns of Sharjah and Ras Al Khaimah, Jazirah Al Hamra and Rams. A dependent of the first Saudi Kingdom, his rule over Ras Al Khaimah ran from 1803–1809, when he was deposed by order of the Saudi Amir and restored in 1820, going on to rule until his death in 1866 at the age of 85. He was Ruler of Sharjah from 1814–1866, with a brief disruption to that rule in 1840 by his elder son Saqr. 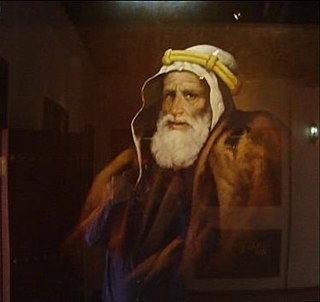 The Al Nuaimi family is the ruling royal family of Ajman, one of the seven emirates that together comprise the United Arab Emirates (UAE).

Masfout is a village that forms part of the eponymous exclave of Masfout in Ajman, one of the seven emirates forming the United Arab Emirates. It is surrounded by Ras Al Khaimah, the Dubai exclave of Hatta and Oman. It is only accessible from Ajman itself by crossing territories of Sharjah, Ras Al Khaimah, and Oman. 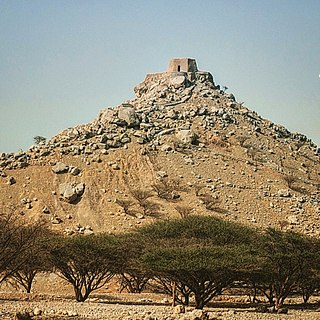 The General Maritime Treaty of 1820 was a treaty initially signed between the rulers of Abu Dhabi, Sharjah, Ajman, Umm al-Quwain and Ras Al Khaimah and Great Britain in January 1820, with the nearby island state of Bahrain acceding to the treaty in the following February. Its full title was, "General Treaty for the Cessation of Plunder and Piracy by Land and Sea, Dated February 5, 1820".

Al Heera is a suburb in Northern Sharjah in the United Arab Emirates, traditionally home to the Darawishah, part of the Al Bu Shamis section of the Na'im tribe. At one stage declaring its independence from Sharjah, with its own Sheikh, it formally became part of the Emirate of Sharjah in 1949 on the death of its Ruler, Abdulrahman Al Shamsi. A coastal settlement with a small harbour formerly used by a number of fishermen and pleasure boat owners, its main distinguishing feature today is its police station, converted in 2019 into the 'Al Heera Literature Society' building.

Saeed bin Butti was the third Ruler of Dubai, succeeding Maktoum bin Butti bin Suhail on his death in 1852. He was a signatory to the landmark treaty with the British, the 'Perpetual Maritime Truce' of 1853. 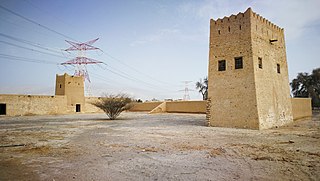 Al Falayah fort is an 18th-century fort in Ras Al Khaimah, United Arab Emirates (UAE). Traditionally the summer residence of the ruling Al Qasimi family, the fort was used as a rest house.

Sheikh Ahmad bin Abdullah Al Mualla was the Ruler of Umm Al Quwain from 1873–1904. He led Umm Al Quwain through a turbulent period in the Trucial Coast's history, with conflicts against neighbouring emirates and almost constantly shifting alliances. On two occasions these conflicts led to him being found to breach the terms of the 1853 Perpetual Maritime Truce with the British. This notwithstanding, he was a signatory to the 1892 Exclusive Agreement, which bound the Trucial Sheikhs and the British together in a protectorate.

Sheikh Rashid bin Humaid Al Nuaimi was the Ruler of Ajman, one of the Trucial States which today form the United Arab Emirates (UAE), from 1816–1838, leading a force of 50 men to take control of the town from members of the Al Bu Shamis tribe who had settled there and also at Al Heera. At the time, Ajman was a dependency of Sharjah. Five years after his establishment at Ajman, the fort was taken by the Darawisha Bedouin who were removed by the action of the Ruler of Sharjah, Sheikh Saqr bin Sultan Al Qasimi.

Abdelaziz bin Rashid Al Nuaimi was the Ruler of Ajman, one of the Trucial States which now form the United Arab Emirates (UAE), from 1841–1848.

Rashid bin Humaid Al Nuaimi II was the Ruler of Ajman, one of the Trucial States which today form the United Arab Emirates (UAE), from 1864–1891. His reign, while largely peaceful, saw the expansion of Wahhabi influence in the Trucial States.

Abdulaziz bin Humaid Al Nuaimi was Ruler of Ajman, one of the Trucial States, which today form the United Arab Emirates (UAE), from 1900–1910. He steered Ajman through a period in which tribal conflicts triggered instability throughout the coast but was to ultimately meet the fate he had himself engineered for his predecessor.

Humaid bin Abdulaziz Al Nuaimi was Ruler of Ajman, one of the Trucial States which today form the United Arab Emirates (UAE), from 1910–1928. His rule was marked by a running conflict with the Al Bu Shamis and their charismatic Sheikh, Abdulrahman bin Muhammad Al Shamsi.

The Sudan is an Arab tribe of Qahtanite origin in Qatar and the United Arab Emirates (UAE), and other Gulf states. 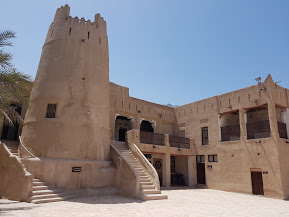 Ajman Fort is a double story traditional rock, coral and mudbrick fortification in the centre of the city of Ajman in the United Arab Emirates (UAE). Its construction is thought to date back to the late 18th century and it is claimed the fort's barjeel, or wind tower, is the oldest such structure in the UAE.